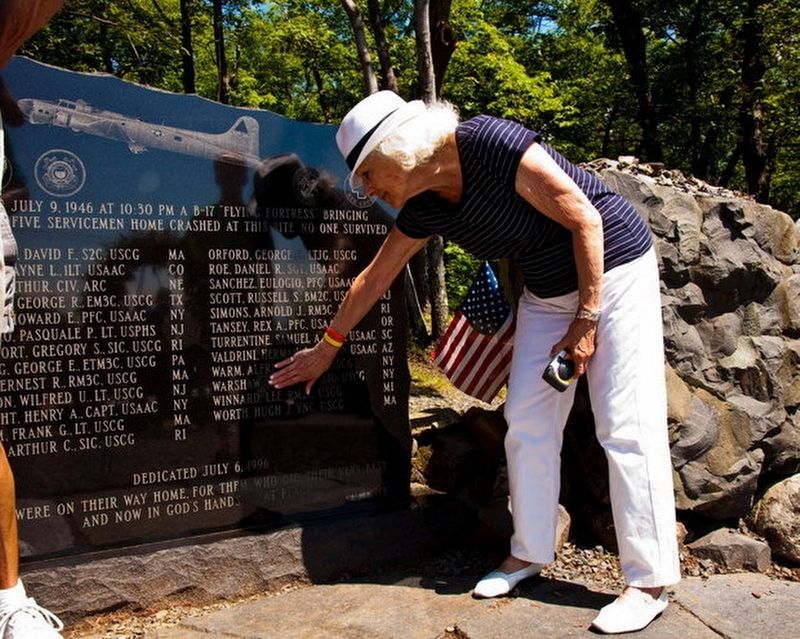 Topics. This memorial is listed in these topic lists: Disasters • War, World II. A significant historical date for this entry is July 9, 1946.

Location. 42° 14.75′ N, 72° 38.572′ W. Marker is in Holyoke, Massachusetts, in Hampden County. Memorial can be reached from Mount Tom Ski Road, on the right when traveling west. http://mttomrange.org/b17-memorial/ http://www.masslive.com/news/index.ssf/2015/07/ceremony_to_mark_69th_annivers.html. Touch for map. Marker is in this post office area: Holyoke MA 01040, United States of America. Touch for directions.

More about this memorial. Accessible on foot or bike on a paved road that is closed to traffic.
The access road is has a 21-degree incline.

From http://www.mttommemorial.org/story/
"The Mt. Tom B-17 Memorial is located at the site of the accident, on the southeast side of Mt. Tom approximately 300 feet below the summit. The memorial is adjacent to the rocky outcrop and old railway roadbed noted in the 1946 accident report. Access to the site is generally up this rail roadbed which now serves as an access road to the TV antennas on top of the mountain. A Memorial Path lined with 26 birch trees -- one for each of the 25 young men plus one for Dorothy Warm Stettner -- leads from the access road up a short incline to the memorial site.
The Memorial consists of this path, the granite monument, a small granite bench and a circular rock ledge enclosing a flat area in front of the monument. The entire area is surrounded by mountain laurel and is presided over by a tall flagpole. Behind the monument is a scorched area where burn marks from the fire of one of the B-17's engines are still evident. On the rock wall adjacent to the monument hikers pile pieces of aircraft wreckage that are still being found in the surrounding woods." ~MT TOM B-17 MEMORIAL COMMITTEE
rial

Regarding Mt. Tom B-17 Memorial. From http://www.mttommemorial.org/story/

"The Mt Tom B-17 Memorial Story
On July 9,1946 at 10:21pm, a B-17 "Flying Fortress" bomber, converted into a transport plane, crashed into the southeast slope of Mt. Tom, outside of Holyoke, Massachusetts. The flight, en route to New York from Greenland, was to stop at Westover Field in Chicopee as the port of entry into the United States before continuing on to its final destination.

The passengers -- 15 Coast Guardsmen, 4 Army Air Corps servicemen, 1 Red Cross official and 1 US Public Health Corps medical doctor -- were returning home after serving their country in Greenland during World War II. The 4 Army Air Corps crew members on the flight were also soon to be discharged after completing their honorable military service.

While making the approach to Westover on a dark, rainy night, the plane struck the 1200-foot mountain about 300 feet below the summit. After tearing through trees, the B-17 hit a rocky outcrop causing the aircraft to disintegrate and starting an intense fire that burned for much of the night. Several people who were at the Mountain Park amusement park at the base of Mt. Tom that evening climbed up toward the accident site via an old cable railway roadbed but could not get close due to the heat of the fires. In the morning, rescue crews found the bodies of the young men among the wreckage in the scarred and charred landscape. All were killed on impact.

The crash was, at the time, the worst air disaster in New England's history and the single largest loss of Coast Guard life outside of a maritime accident.

For the next 50 years, the only memorial at the crash site was a small cairn of rocks that passing hikers would occasionally maintain. However, in 1994, Holyoke resident Norman Cote determined that a more appropriate monument was needed to honor the 25 young men. In the true altruistic spirit of the Pioneer Valley, an all-volunteer committee was formed, money was raised, a design was conceived, family members of the deceased were located, and a permanent monument was established alongside that rocky outcrop and old cable railway.

Fifty years after the tragedy, on July 6, 1996, during an inaugural ceremony, the Mt. Tom B-17 Memorial was dedicated to those 25 servicemen who, in Norm Cote's words "...were on their way home. For them, who did their very best, and now in God's hands... at peace."" ~MT TOM B-17 MEMORIAL COMMITTEE
Credits. This page was last revised on January 9, 2018. It was originally submitted on July 25, 2016, by William Pitt of Holyoke, Massachusetts. This page has been viewed 279 times since then and 48 times this year. Photo   1. submitted on July 25, 2016, by William Pitt of Holyoke, Massachusetts. • Bill Pfingsten was the editor who published this page.
Share this page.