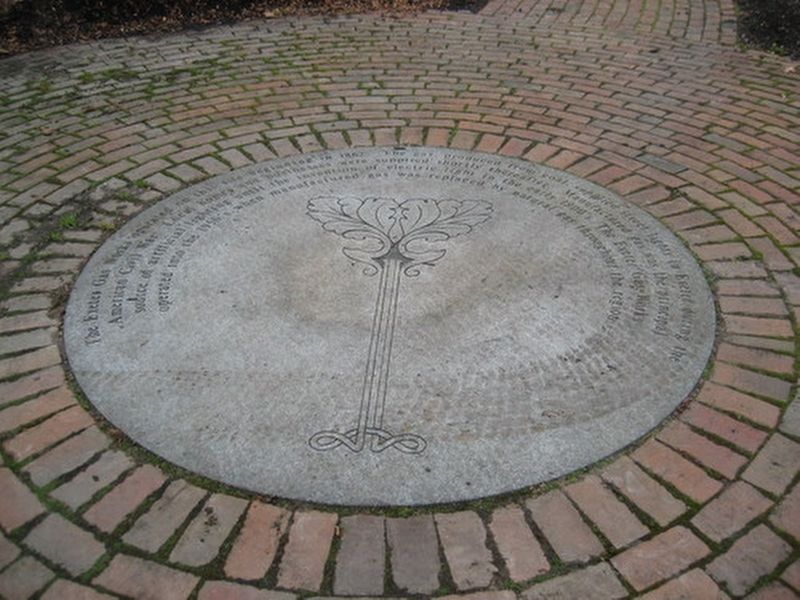 The Exeter Gas Works operated on this site beginning in 1862. The gas, produced from coal, supplied street lights in Exeter during the American Civil War. Local homes and businesses were supplied shortly thereafter. Manufactured gas was the principle source of artificial lighting until the invention of electric light in the early 1900's. The Exeter Gas Works operated into the 1950's when manufactured gas was replaced by natural gas throughout the region

Topics. This historical marker is listed in these topic lists: Environment • Industry & Commerce. A significant historical year for this entry is 1862.

Location. 42° 58.967′ N, 70° 57.118′ W. Marker is in Exeter, New Hampshire, in Rockingham County. Marker can be reached from Newfields Road. This is a large cement medallion in the center of a small park with a brick walkway and a couple of benches overlooking the Squamscott River. A brick walkway leads to the Second Burial Ground. Touch for map. Marker is in this post office area: Exeter NH 03833, United States of America. Touch for directions.

Other nearby markers. At least 8 other markers are within walking distance of this marker. Second Burial Ground (here, next to this marker); Ladd-Gilman House (approx. 0.2 miles away); Powder House