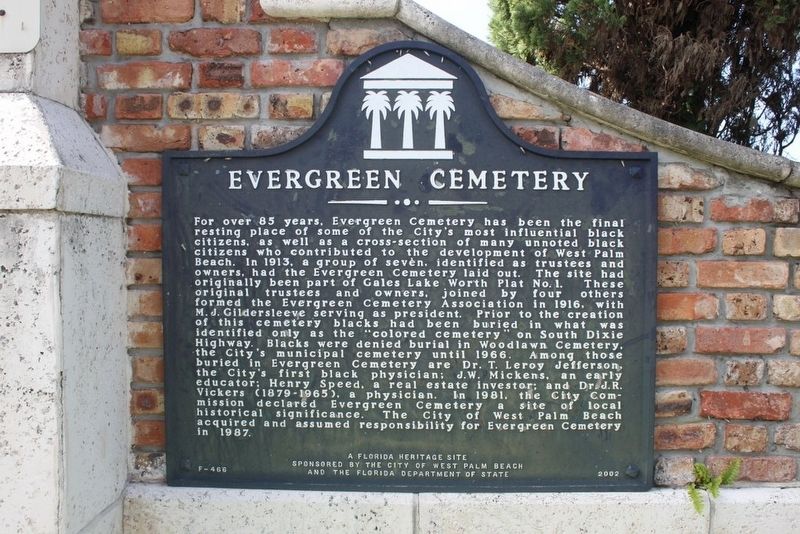 For over 85 years, Evergreen Cemetery has been the final resting place of some of the City’s most influential black citizens, as well as a cross-section of many unnoted black citizens who contributed to the development of West Palm Beach. In 1913, a group of seven, identified as trustees and owners, had the Evergreen Cemetery laid out. The site had originally been part of Gale’s Lake Worth Plat No. 1. These original trustees and owners, joined by four others formed the Evergreen Cemetery Association in 1916, with M.J. Gildersleeve serving as president. Prior to the creation of this cemetery blacks had been buried in what was identified only as the “colored cemetery” on South Dixie Highway. Blacks were denied burial in Woodlawn Cemetery, the City's municipal cemetery until 1966. Among those buried in Evergreen Cemetery are Dr. T. Leroy Jefferson, the City’s first black physician; J.W. Mickens, an early educator; Henry Speed, a real estate investor; and Dr. J.R. Vickers (1879-1965), a physician. In 1981, the City Commission declared Evergreen Cemetery a site of local historical significance. The City of West Palm Beach acquired 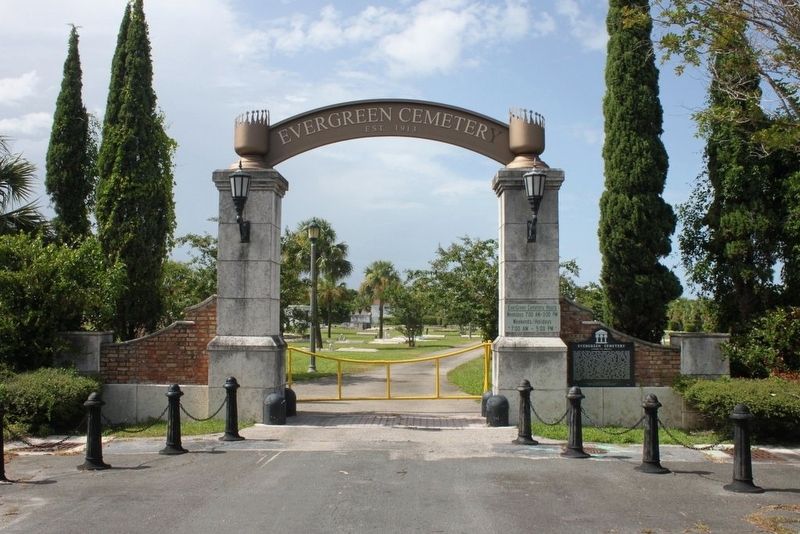 Click or scan to see
this page online
and assumed responsibility for Evergreen Cemetery in 1987.

Erected 1987 by The City of West Palm Beach and the Florida Department of State. (Marker Number F-466.)

Topics. This historical marker is listed in these topic lists: African Americans • Cemeteries & Burial Sites. A significant historical year for this entry is 1913.

Other nearby markers. At least 8 other markers are within 2 miles of this marker, measured as the crow flies. Hurricane of 1928 Mass Burial Site (approx. 0.2 miles away); Northwood Road Historic District (approx. 0.4 miles away); Old Northwood Historic District (approx. half a mile away); Dr. Martin Luther King Jr. Landmark Memorial (approx. ¾ mile away); Northwest Historic District (approx. one mile away); Industrial High School (approx. one mile away); Duck's Nest (approx. 1.1 miles away); Bethesda-By-The-Sea (approx. 1.1 miles away). Touch for a list and map of all markers in West Palm Beach.
Credits. This page was last revised on March 5, 2018. It was originally submitted on August 9, 2016, by Tim Fillmon of Webster, Florida. This page has been viewed 421 times since then and 112 times this year. Last updated on August 9, 2016, by Tim Fillmon of Webster, Florida. Photos:   1, 2. submitted on August 9, 2016, by Tim Fillmon of Webster, Florida. • Bernard Fisher was the editor who published this page.
Share this page.