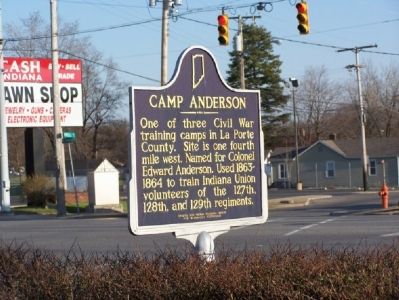 By Mbowyer, April 21, 2007
1. Camp Anderson Marker
Inscription.
Camp Anderson. . One of three Civil War training camps in La Porte County. Site is one fourth mile west. Named for Colonel Edward Anderson. Used 1863-1864 to train Indiana Union volunteers of the 127th, 128th, and 129th regiments. . This historical marker was erected in 1996 by the Indiana Historical Bureau and McDonald's Restaurant. It is in Michigan City in LaPorte County Indiana

Topics and series. This historical marker is listed in this topic list: War, US Civil. In addition, it is included in the Indiana Historical Bureau Markers series list.

Location. 41° 42.535′ N, 86° 52.191′ W. Marker is in Michigan City, Indiana, in LaPorte County. Marker is at the intersection of East Michigan Avenue (U.S. 35) and Carroll Avenue on East Michigan Avenue. The marker is located next to the McDonald's Restaurant, but due to the traffic in this location, I could not obtain a photograph showing the restaurant in the background. Touch for map. Marker is at or near this postal address: 2404 E Michigan Blvd, Michigan City IN 46360, United States of America. Touch for directions.

Other nearby markers. At least 5 other markers are within walking distance of this marker. Michigan City Civil War Memorial (approx. 0.7 miles away); Battle of Trail Creek 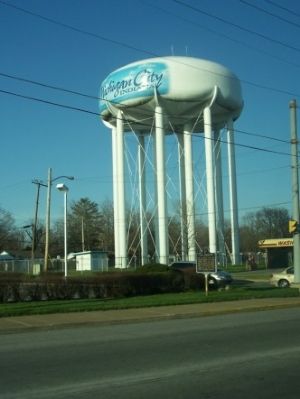