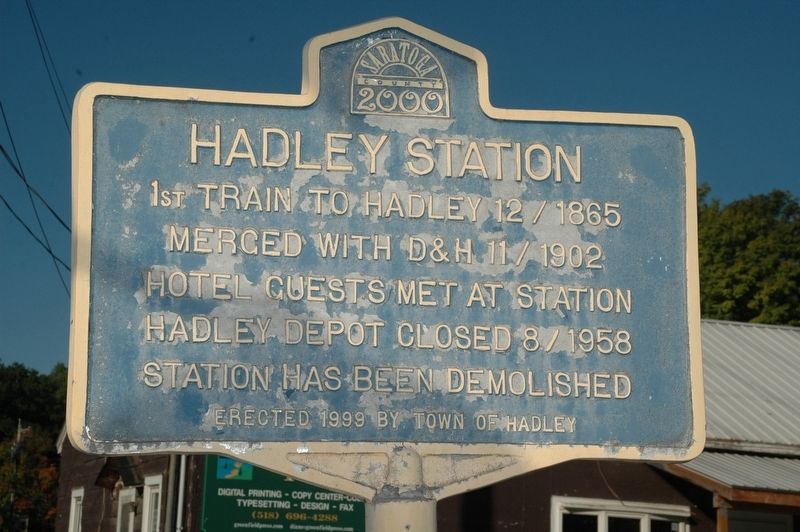 Photographed By Howard C. Ohlhous, September 2, 2016
1. Hadley Station Marker
Inscription.
Hadley Station. .
1st Train To Hadley 12/1865 Merged With D&H 11/1902 Hotel Guests Met At Station Hadley Depot Closed 8/1958 Station Has Been Demolished Erected 1999 By Town of Hadley . . This historical marker was erected in 1999 by Town of Hadley. It is in Hadley in Saratoga County New York

Topics. This historical marker is listed in this topic list: Railroads & Streetcars. A significant historical month for this entry is December 1865.

Location. 43° 19.012′ N, 73° 50.952′ W. Marker is in Hadley, New York, in Saratoga County. Marker is at the intersection of Rockwell St. (County Route 4) and The railroad tracks, on the right when traveling west on Rockwell St.. Touch for map. Marker is in this post office area: Hadley NY 12835, United States of America. Touch for directions.

Other nearby markers. At least 8 other markers are within walking distance of this marker. To Those Who Served (within shouting distance of this marker); Post Office (about 400 feet away, measured in a direct line); Arlington Hotel (about 600 feet away); Hadley & Lake Luzerne Korean War and Vietnam War Memorial (approx. ¼ mile away); Hadley Bow Bridge (approx. ¼ mile away); Jeremy Rockwell 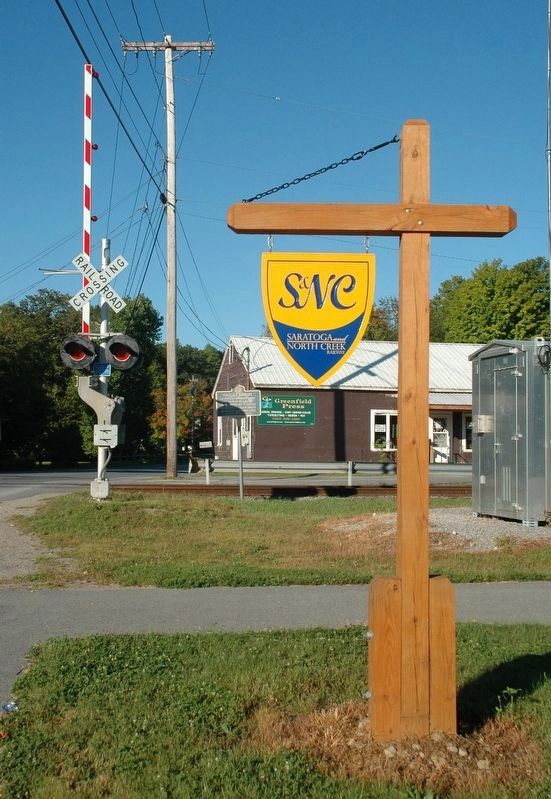 Photographed By Howard C. Ohlhous, September 2, 2016
2. Hadley Station Marker
The marker is to the right of, and partially in the shadow of, the railroad crossing protection.

Regarding Hadley Station. In 1871, a sixty mile railroad line was completed from Saratoga Springs to North Creek, New York, creating an important link with the Adirondack Mountains.

The rail line began in 1863 as the Adirondack Company, incorporated under Dr. Thomas C. Durant, a leading figure in the Union Pacific Railroad. In 1881 the mortgage was foreclosed on the property, and the line was sold to his son, William West Durant, and then renamed The Adirondack Railway Company. On November 5th in 1902 it merged with the Delaware and Hudson Railroad to become the Adirondack Branch.

The railroad station in Hadley was built in 1870 as a combination passenger and freight station and was the largest one of on the line, and measured 20'x96'. In 1957, the NYS Public Service Commission granted permission to suspend passenger service to the Hadley depot. It closed on August 5th, 1958. It was sold and removed probably in 1959 and the property was sold to Joseph White who used the spot to park trucks for his lumbering business. It was located on the northeast side 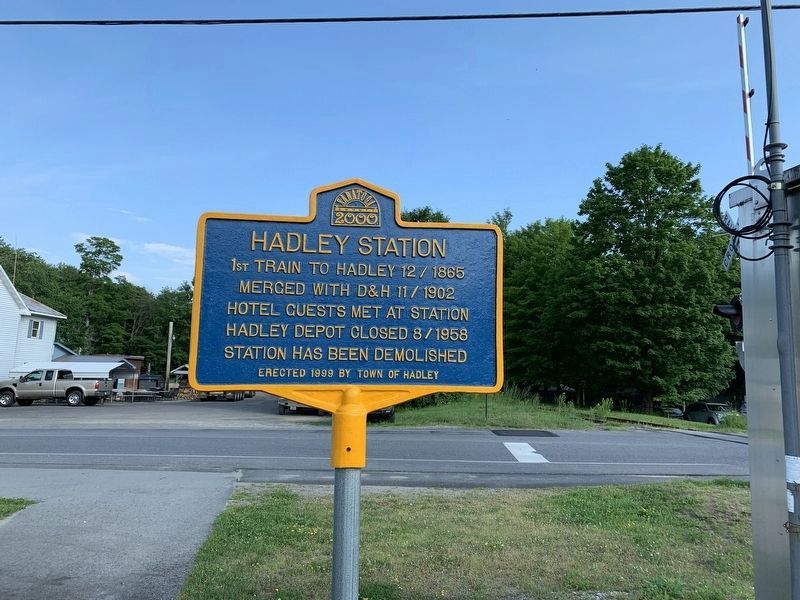 Photographed By Steve Stoessel
3. Repainted Sign 2019
The S&NC Railroad is no longer in operation
of the intersection with Conklingville Road in Hadley. 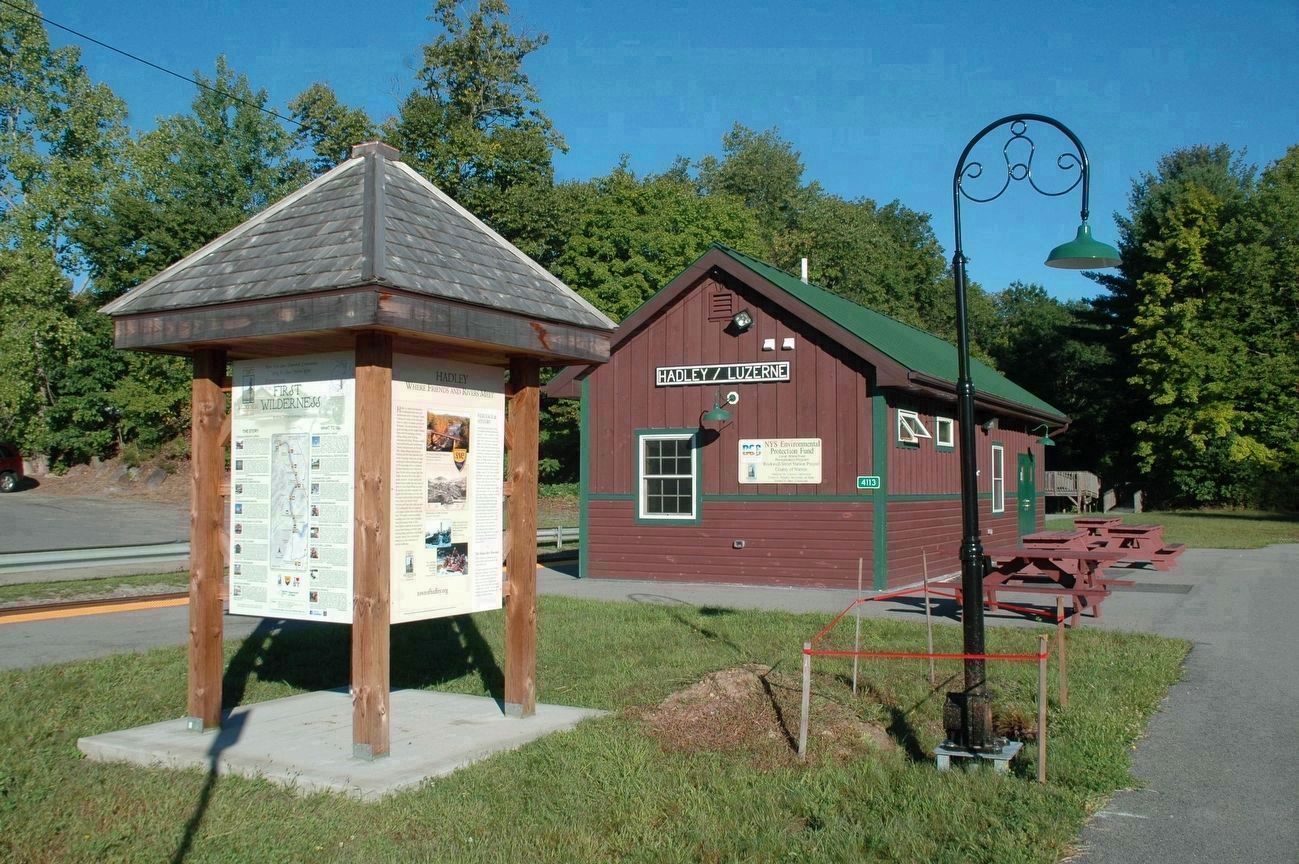