Niagara River and her Ships 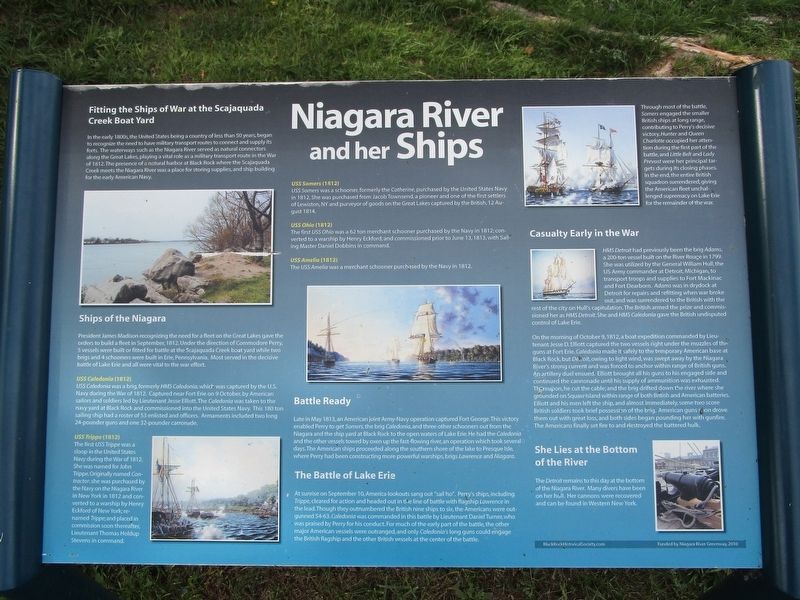 Fitting the Ships of War at the Scajaquada Creek Boat Yard
In the early 1800s, the United States being a country of less than 50 years, began to recognize the need to have military transport routes to connect and supply its forts. The waterways such as the Niagara River served as natural connectors along the Great Lakes, playing a vital role as a military transport route in the War of 1812. the presence of a natural harbor at Black Rock where the Scajaquada Creek meets the Niagara River was a place for storing supplies, and ship building for the early American Navy.

Ships of the Niagara
President James Madison recognizing the need for a fleet on the Great Lakes gave the orders to build a fleet in September, 1812. Under the direction of Commodore Perry, 5 vessels were built or fitting for battle at the Scajaquada Creek boat yard while two brigs and 4 schooners were built in Erie, Pennsylvania. Most served in the decisive battle of Lake Erie and all were vital to the war effort. 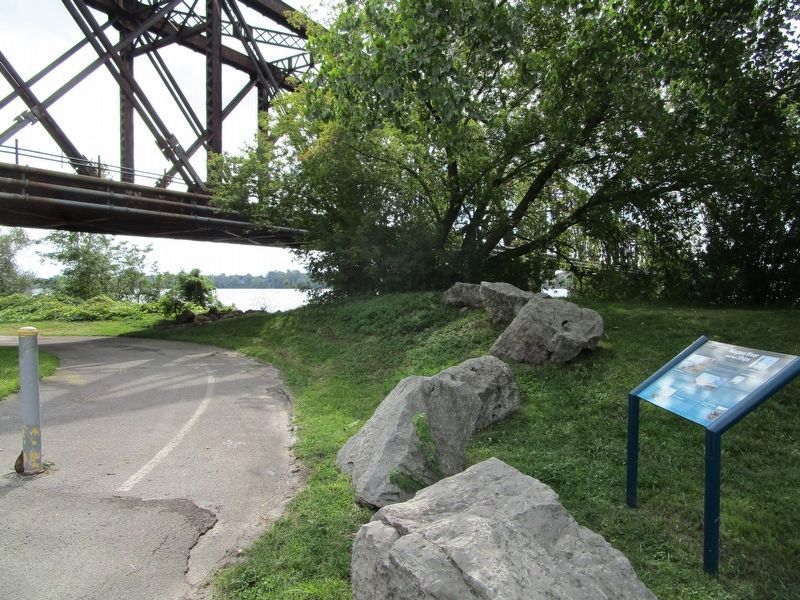 Photographed By Anton Schwarzmueller, September 18, 2016
2. Niagara River and her Ships Marker
Marker is immediately north of the International Railway Bridge on Unity Island (nee Squaw Island). This is the bike/pedestrian path.

Click or scan to see
this page online
the War of 1812. Captured near Fort Erie on 9 October, by American sailors and soldiers led by Lieutenant Jesse Elliott. The Caledonia was taken to the navy yard at Black Rock and commissioned into the United States Navy. This 180 ton sailing ship had a roster of 53 enlisted and officers. Armaments included two long 24-pounder guns and one 32-pounder carronade.

USS Trippe (1812)
The first USS Trippe was a sloop in the United States Navy during the War of 1812. She was named for John Trippe. Originally named Contractor, she was purchased by the Navy on the Niagara River in New York in 1812 and converted to a warship by Henry Eckford of New York; renamed Trippe; and placed in commission soon thereafter, Lieutenant Thomas Holdup Stevens in command.

USS Somers (1812)
USS Somers was a schooner, formerly the Catherine, purchased by the United States Navy in 1812. She was purchased from Jacob Townsend, a pioneer and one of the first settlers of Lewiston, NY and purveyor of goods on the Great Lakes captured byt the British, 12 August 1814.

USS Ohio (1812)
The first USS Ohio was a 62 ton merchant schooner purchased by the Navy in 1812; converted to a warship by Henry Eckford; and commissioned prior to June 13, 1813, with Sailing Master Daniel Dobbins in command. 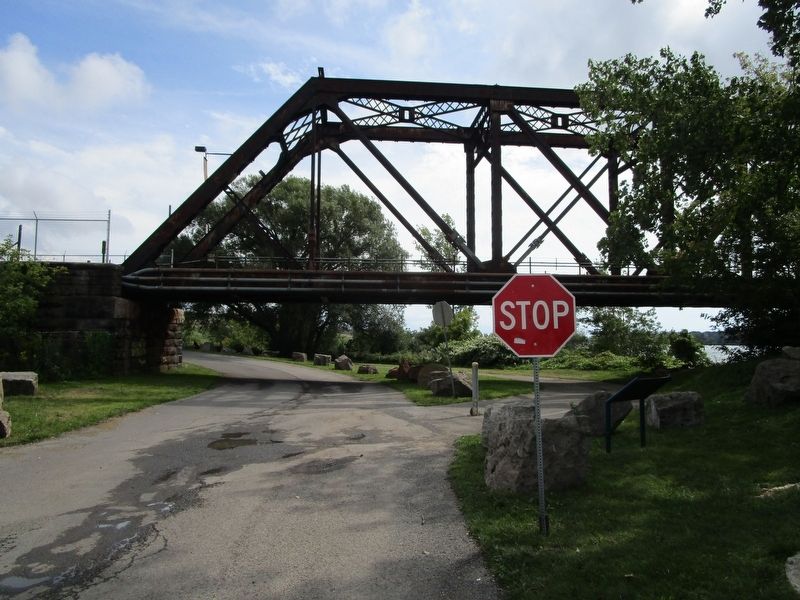 Photographed By Anton Schwarzmueller, September 18, 2016
3. Back of Marker & Road
Here is the back of the marker. Here the park road ducks under the bridge (low clearence) to the marker and continues north behind the viewer. The southern part of the island can be reached by the bike/pedestrian path from here, but public cars must leave the island and re-cross the Black Rock Channel on the Ferry Street Bridge.
(1812)
The USS Amelia was a merchant schooner purchased by the Navy in 1812.

Battle Ready
Late in May 1813, an American joint Army-Navy operation captured Fort George. This victory enabled Perry to get Somers, the brig Caledonia , and three other schooners out from the Niagara and the ship yard at Black Rock to the open waters of Lake Erie. He had the Caledonia and the other vessels towed by oxen up the fast-flowing river, an operation which took several days. The American ships proceeded along the southern shore of the lake to Presque Isle, where Perry had been constructing more powerful warships, brigs Lawrence and Niagara.

The Battle of Lake Erie
At sunrise on September 10, America lookouts sang out "sail ho". Perry's ships, including Trippe, cleared for action and headed out in the line of battle with flagship Lawrence in the lead. Though they outnumbered the British nine ships to six, the Americans were out-gunned 54-63. Caledonia was commanded in theis battle by Leiutenant Daniel Turner, who was praised by Perry for his conduct. For much of the early part of the battle, the other major American vessels were outranged, and only Caledonia's long guns could engage the British flagship and the other British vessels at the center of the battle.

Through most of the battle, 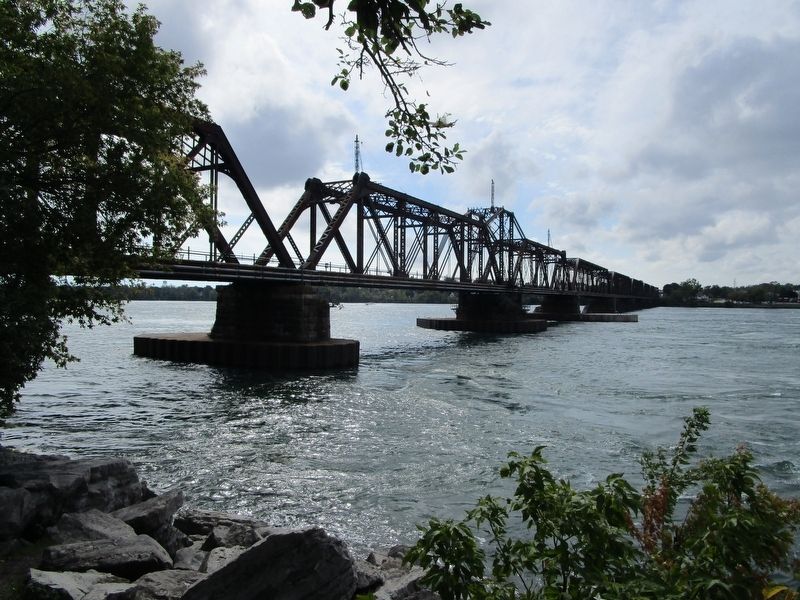 Photographed By Anton Schwarzmueller, September 18, 2016
4. Niagara River and International Railway Bridge
View by the marker.
Somers engaged the smaller British ships at long range, contributing to Perry's decisive victory. Hunter and Queen Charlotte occupied her attention during the first part of the battle, and Little Belt and Lady Provost were her principal targets during its closing phases. In the end, the entire British squadron surrendered, giving the American fleet unchallenged supremacy on Lake Erie for the remainder of the war.

Casualty Early in the War
HMS Detroit had previously been the brig Adams, a 200-ton vessel built on the River Rouge in 1799. She was utilized by the General William Hull, the US Army commander at Detroit, Michigan, to transport troops and supplies to Fort Mackinac and Fort Dearborn. Adams was in drydock at Detroit for repairs and refitting when war broke out, and was surrendered to the British with the rest of the city on Hull's capitulation. The British armed the prize and commissioned her as HMS Detroit. She and HMS Caledonia gave the British undisputed control of Lake Erie.

On the morning of October 9, 1812, a boat expedition commanded by Lieutenant Jesse D. Elliott captured the two vessels right under the muzzles of the guns at Fort Erie. Caledonia made it safely to the temporary American base at Black Rock, but Detroit, owing to light wind, was swept away by the Niagara River's strong current and was forced to anchor within range of British guns. An artillery duel ensued., Elliott brought all his guns to his engaged side and continued the cannonade until his supply of ammunition was exhausted. Thereupon, he cut the cable; and the brig drifted down the river where she was grounded on Squaw Island within range of both British and American batteries. Elliott and his men left the ship, and almost immediately, some two score British soldiers took brief possession of the brig. American guns soon drove them out with great loss, and both sides began pounding her with gunfire. The Americans finally set fire to and destroyed the battered hulk.

She Lies at the Bottom of the River
The Detroit remains to this day at the bottom of the Niagara River. Many divers have been on her hull. Her cannons were recovered and can be found in Western New York.

Topics and series. This historical marker is listed in these topic lists: War of 1812 • Waterways & Vessels. In addition, it is included in the Former U.S. Presidents: #04 James Madison series list. A significant historical month for this entry is May 1813.

Location. 42° 55.793′ N, 78° 54.413′ W. Marker is in Buffalo, New York, in Erie County. Marker can be reached from Niagara Street (New York State Route 266). Marker is on the northern part of Unity Island, by the bank of the Niagara River at the International Railway Bridge. It is in Broderick Park. Access is by car from Niagara Street at the section of the International Railway Bridge over the Black Rock Channel, where a single lane of the railroad bridge may be used by vehicles. Touch for map. Marker is in this post office area: Buffalo NY 14213, United States of America. Touch for directions.