Where Poe Wrote “The Raven” 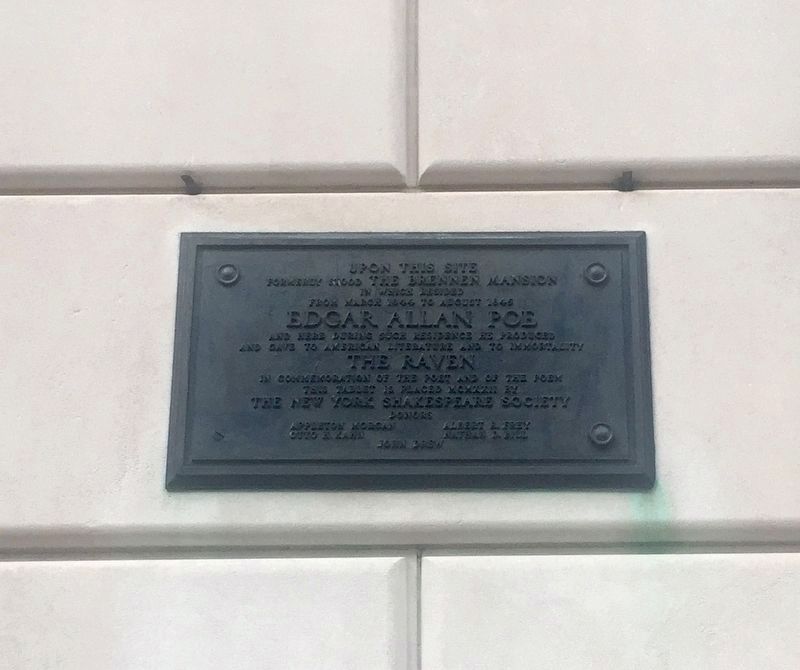 Photographed By Andrew Ruppenstein, October 3, 2016
1. Where Poe Wrote the Raven Marker
Inscription.
Where Poe Wrote “The Raven”. .
Upon this site formerly stood The Brennen Mansion in which resided from March 1844 to August 1845 Edgar Allan Poe and here during such residence he produced and gave to American literature and to immortality The Raven in commemoration of the poet and of the poem this tablet is placed MCMXXII by The New York Shakespeare Society, Donors . Appleton Morgan . Albert R. Frey . Otto H. Kahn . Nathan D. Bill . John Drew . This historical marker was erected in 1922 by The New York Shakespeare Society. It is in New York in New York County New York

Topics. This historical marker is listed in these topic lists: Arts, Letters, Music • Entertainment. A significant historical month for this entry is March 1844.

Other nearby markers. At least 8 other markers are within walking distance of this marker. Where Poe wrote The Raven (within shouting distance of this marker); Sergei Vassilevich Rachmaninoff (about 500 feet away, measured in a direct line); The Saxony (about 700 feet away); Volunteer of America Centennial Rose Garden (approx. ¼ mile away); Dorothy Parker (approx. ¼ mile away); Claremont Riding Academy 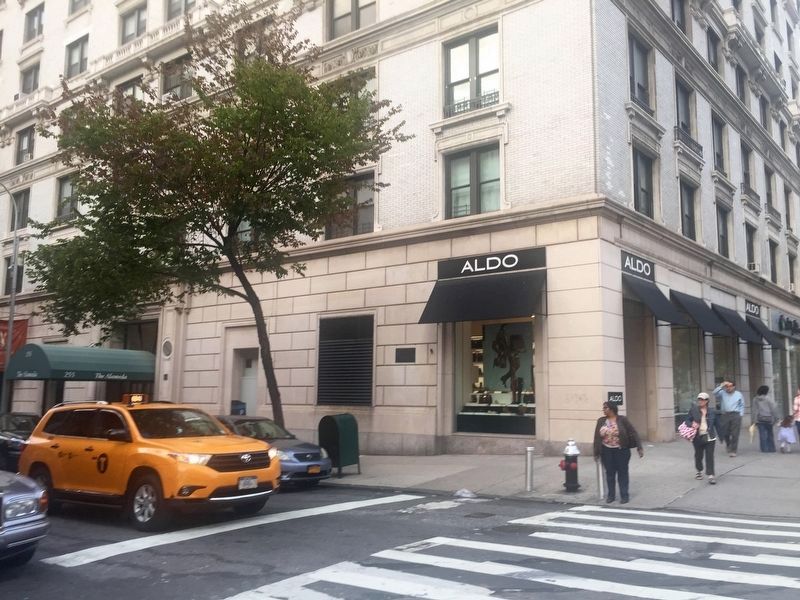 Photographed By Andrew Ruppenstein, October 3, 2016
2. Where Poe Wrote the Raven Marker - Wide View
The marker is visible here just to the left of the Aldo display window.

Also see . . .
1. The Raven (Wikipedia). "The Raven" is a narrative poem by American writer Edgar Allan Poe. First published in January 1845, the poem is often noted for its musicality, stylized language, and supernatural atmosphere. It tells of a talking raven's mysterious visit to a distraught lover, tracing the man's slow fall into madness. The lover, often identified as being a student, is lamenting the loss of his love, Lenore. Sitting on a bust of Pallas, the raven seems to further instigate his distress with its constant repetition of the word "Nevermore". The poem makes use of a number of folk, mythological, religious, and classical references. (Submitted on October 9, 2016.) 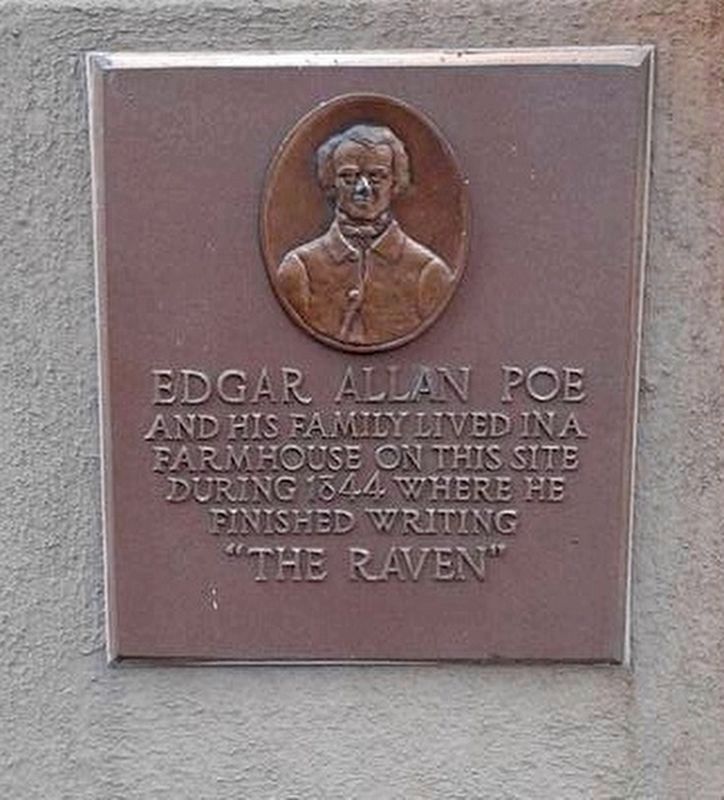 Photographed By Erik Lander
3. A competing Where Poe Wrote the Raven Marker
This marker is also found on West 84th Street, but on the east side of Broadway.
Only this and nothing more.”

Ah, distinctly I remember it was in the bleak December;
And each separate dying ember wrought its ghost upon the floor.
Eagerly I wished the morrow;—vainly I had sought to borrow
From my books surcease of sorrow—sorrow for the lost Lenore—
For the rare and radiant maiden whom the angels name Lenore—
Nameless here for evermore.

Presently my soul grew stronger; hesitating then no longer,
“Sir,” said I, “or Madam, truly your forgiveness I implore;
But the fact is I was napping, and so gently you came rapping,
And so faintly you came tapping, tapping at my chamber door,
That I scarce was sure I heard you”—here I opened wide the door;—
Darkness there and nothing more.

Deep into that darkness peering, long I stood there wondering, fearing,
Doubting, dreaming dreams no mortal ever dared to dream before;
But the silence was unbroken, and the stillness gave no token,
And the only word there spoken was the whispered word, “Lenore?”
This I whispered, and an echo 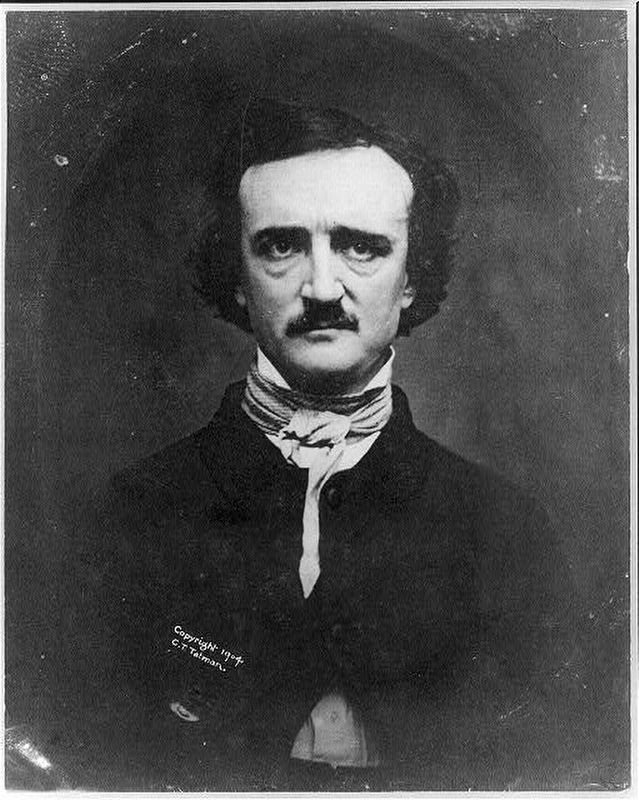 Photo of daguerreotype by W.S. Hartshorn; copyright 1904 by C.T. Tatman., 1848
4. Edgar Allan Poe
Photo courtesy of the Library of Congress.
murmured back the word, “Lenore!”—
Merely this and nothing more.

Back into the chamber turning, all my soul within me burning,
Soon again I heard a tapping somewhat louder than before.
“Surely,” said I, “surely that is something at my window lattice;
Let me see, then, what thereat is, and this mystery explore—
Let my heart be still a moment and this mystery explore;—
’Tis the wind and nothing more!”

Open here I flung the shutter, when, with many a flirt and flutter,
In there stepped a stately Raven of the saintly days of yore;
Not the least obeisance made he; not a minute stopped or stayed he;
But, with mien of lord or lady, perched above my chamber door—
Perched upon a bust of Pallas just above my chamber door—
Perched, and sat, and nothing more.

Then this ebony bird beguiling my sad fancy into smiling,
By the grave and stern decorum of the countenance it wore,
“Though thy crest be shorn and shaven, thou,” I said, “art sure no craven,
Ghastly grim and ancient Raven wandering from the Nightly shore—
Tell me what thy lordly name is on the Night’s Plutonian shore!”
Quoth the Raven “Nevermore.”

Much I marvelled this ungainly fowl to hear discourse so plainly,
Though its answer little meaning—little relevancy bore;
For we cannot help agreeing that no living human being
Ever yet was blessed with seeing bird 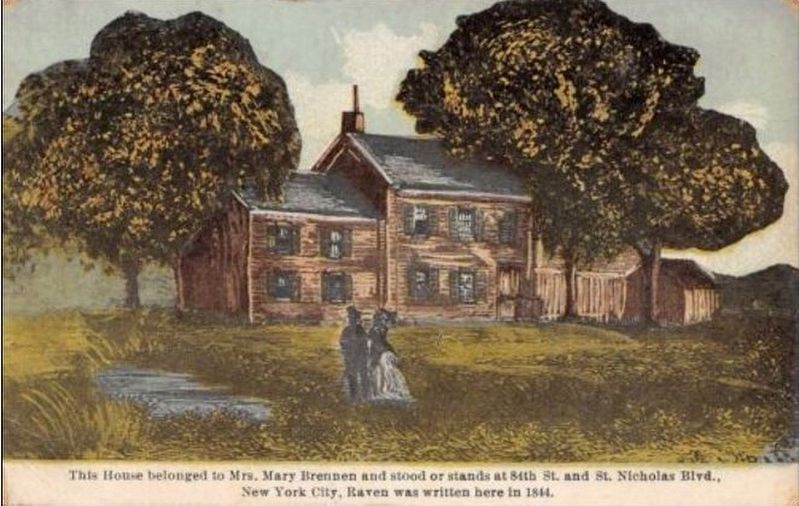 circa 1910
5. Where Poe Wrote the Raven Postcard
Caption:This House belonged to Mrs. Mary Brennen and stood or stands at 84th St. and St. Nicholas Blvd., New York City, Raven was written here in 1844.
above his chamber door—
Bird or beast upon the sculptured bust above his chamber door,
With such name as “Nevermore.”

But the Raven, sitting lonely on the placid bust, spoke only
That one word, as if his soul in that one word he did outpour.
Nothing farther then he uttered—not a feather then he fluttered—
Till I scarcely more than muttered “Other friends have flown before—
On the morrow he will leave me, as my Hopes have flown before.”
Then the bird said “Nevermore.”

Startled at the stillness broken by reply so aptly spoken,
“Doubtless,” said I, “what it utters is its only stock and store
Caught from some unhappy master whom unmerciful Disaster
Followed fast and followed faster till his songs one burden bore—
Till the dirges of his Hope that melancholy burden bore
Of ‘Never—nevermore’.”

But the Raven still beguiling all my fancy into smiling,
Straight I wheeled a cushioned seat in front of bird, and bust and door;
Then, upon the velvet sinking, I betook myself to linking
Fancy unto fancy, thinking what this ominous bird of yore—
What this grim, ungainly, ghastly, gaunt, and ominous bird of yore
Meant in croaking “Nevermore.”

This I sat engaged in guessing, but no syllable expressing
To the fowl whose fiery eyes now burned into my bosom’s core;
This and more I sat divining, with my head at ease reclining
On the cushion’s velvet lining that the lamp-light gloated o’er,
But whose velvet-violet lining with the lamp-light gloating o’er,
She shall press, ah, nevermore!

Then, methought, the air grew denser, perfumed from an unseen censer
Swung by Seraphim whose foot-falls tinkled on the tufted floor.
“Wretch,” I cried, “thy God hath lent thee—by these angels he hath sent thee
Respite—respite and nepenthe from thy memories of Lenore;
Quaff, oh quaff this kind nepenthe and forget this lost Lenore!”
Quoth the Raven “Nevermore.”

“Prophet!” said I, “thing of evil!—prophet still, if bird or devil!—
Whether Tempter sent, or whether tempest tossed thee here ashore,
Desolate yet all undaunted, on this desert land enchanted—
On this home by Horror haunted—tell me truly, I implore—
Is there—is there balm in Gilead?—tell me—tell me, I implore!”
Quoth the Raven “Nevermore.”

“Be that word our sign of parting, bird or fiend!” I shrieked, upstarting—
“Get thee back into the tempest and the Night’s Plutonian shore!
Leave no black plume as a token of that lie thy soul hath spoken!
Leave my loneliness unbroken!—quit the bust above my door!
Take thy beak from out my heart, and take thy form from off my door!”
Quoth the Raven “Nevermore.”

And the Raven, never flitting, still is sitting, still is sitting
On the pallid bust of Pallas just above my chamber door;
And his eyes have all the seeming of a demon’s that is dreaming,
And the lamp-light o’er him streaming throws his shadow on the floor;
And my soul from out that shadow that lies floating on the floor
Shall be lifted—nevermore!
— Submitted January 28, 2017.
Credits. This page was last revised on May 16, 2020. It was originally submitted on October 9, 2016, by Andrew Ruppenstein of Sacramento, California. This page has been viewed 639 times since then and 54 times this year. It was the Marker of the Week January 29, 2017. Photos:   1, 2, 3, 4, 5. submitted on October 9, 2016, by Andrew Ruppenstein of Sacramento, California.
Share this page.