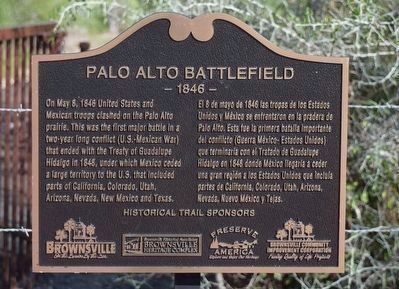 English:
On May 8, 1846 United States and Mexican troops clashed on the Palo Alto prairie. This was the first major battle in a two-year long conflict (U.S.-Mexican War) that ended with the Treaty of Guadalupe Hidalgo in 1848, under which Mexico ceded a large territory to the U.S. that included parts of California, Colorado, Utah, Arizona, Nevada, New Mexico and Texas.