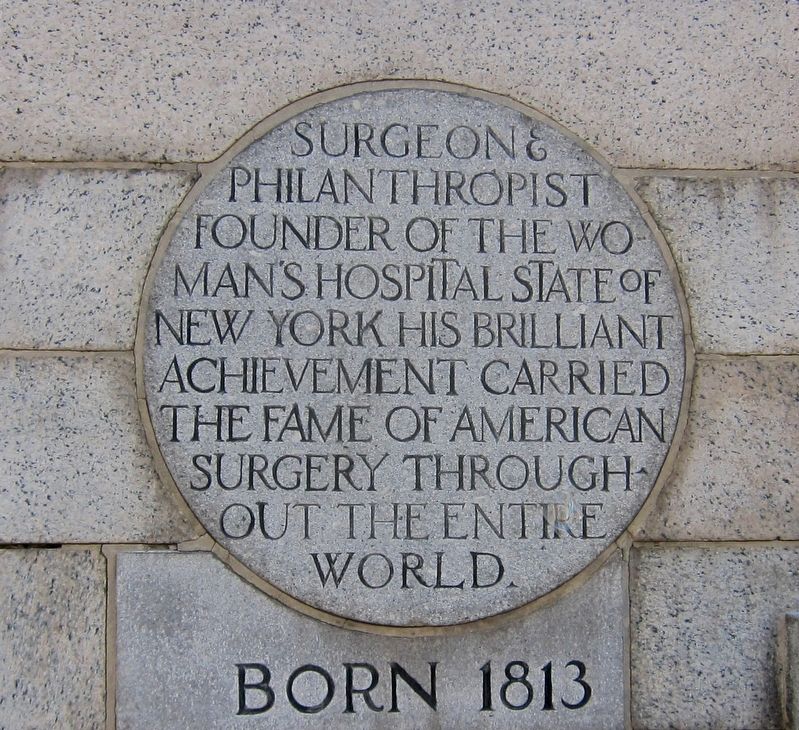 By Andrew Ruppenstein, October 4, 2016
1. J. Marion Sims Marker - First Panel
Inscription.
J. Marion Sims, M.D., L.L.D.. Born 1813 . Died 1883. , Surgeon and Philanthropist. Founder of the Womans Hospital State of New York. His brilliant achievement carried the fame of American surgery throughout the entire world, In recognition of his services in the cause of science and mankind Awarded highest honors by his countrymen and decorations from the governments of Belgium · France · Italy · Spain and Portugal . This historical marker was erected in 1894 by Subscription organized by "Medical Record". It is in New York in New York County New York

Surgeon & Philanthropist. Founder of the Womans Hospital State of New York. His brilliant achievement carried the fame of American surgery throughout the entire world 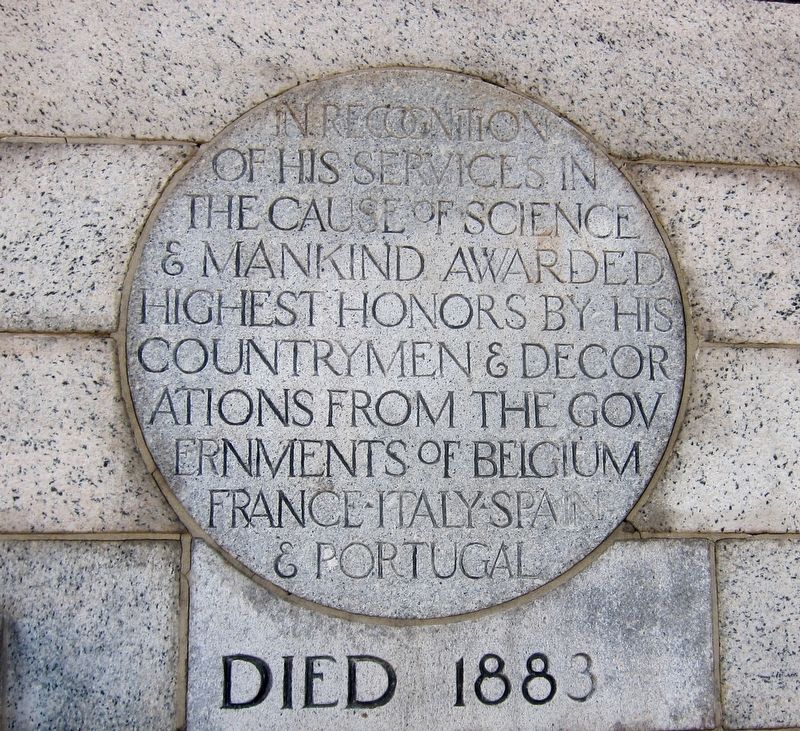 More about this marker. This statue again has been relocated in February 2018. Due to his cruel methods, a New York City committee decided to move the statue to Dr. Sims gravesite in Greenwood Cemetery in Brooklyn.

The statue was originally installed in Bryant Park in 1894, but was moved and installed opposite the New York Academy of Medicine in 1934.

Also see . . .
1. J. Marion Sims. Wikipedia entry:
James Marion Sims (January 25, 1813 – November 13, 1883) (known as J. Marion Sims) was an American physician and a pioneer in the field of surgery, known as the "father of modern gynecology". His most significant work was to develop a surgical technique for the repair of vesicovaginal fistula, a severe complication of obstructed childbirth....Sims' use of enslaved African-American women as experimental subjects is considered highly unethical by modern historians and ethicists. He is considered "a prime example of progress in the medical profession made at the expense of a vulnerable population." Physician L.L. Wall has attempted to defend Sims on the basis of his conformity to accepted medical practices 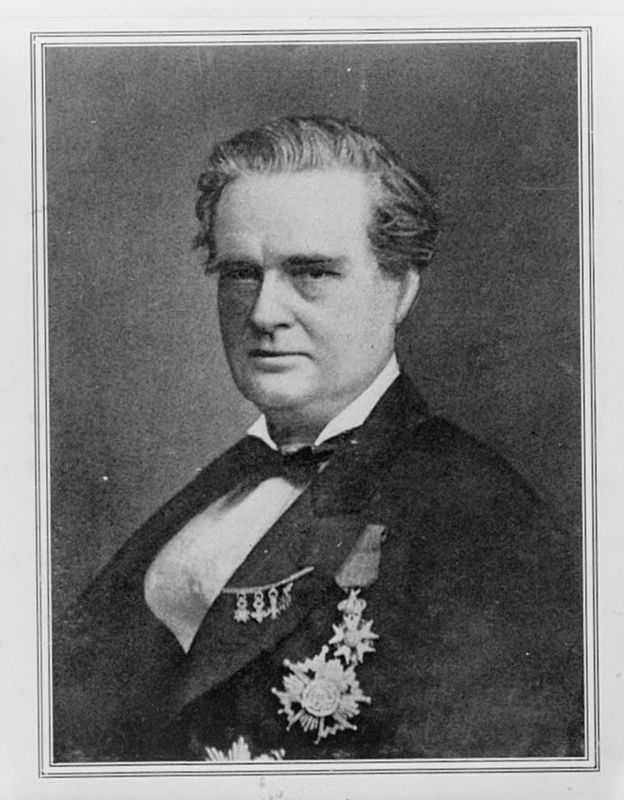 Published by N.Y. Medical Journal, circa 1900
3. J. Marion Sims
Image courtesy of the Library of Congress.
of the time, the therapeutic nature of his surgery, and the catastrophic nature for women of the condition he was trying to fix. (Submitted on October 11, 2016.) 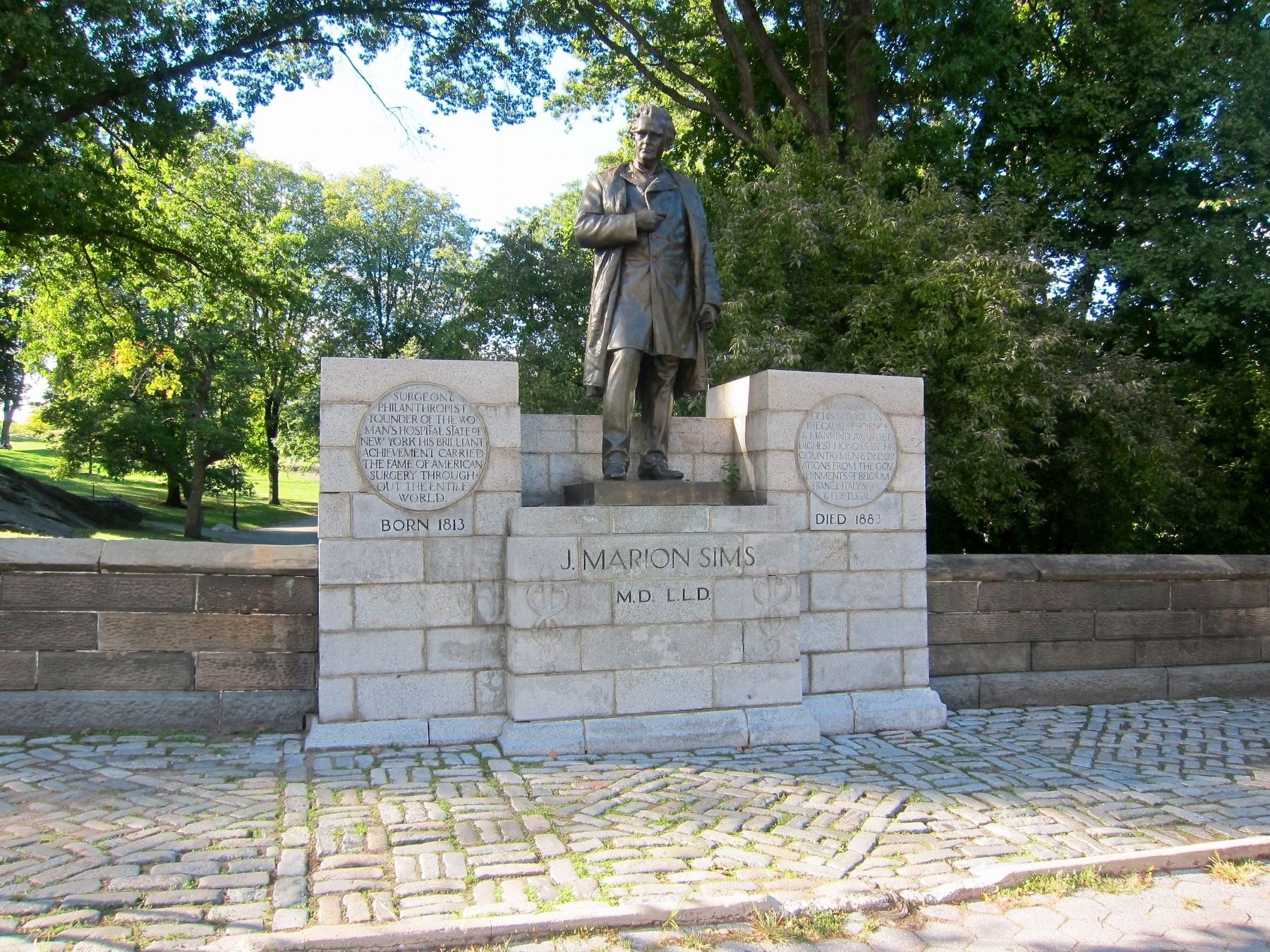 By Andrew Ruppenstein, October 4, 2016
4. J. Marion Sims Statue and Marker - Wide View
From 1845 to 1849 Sims conducted a series of experiments on enslaved Black women that led to medical breakthroughs in treating vesicovaginal fistula, which results from difficult childbirths. Three of the enslaved women were identified by Sims as Anarcha, Betsey, and Lucy. Medical scholarship has debated Sims' application of "informed consent" with respect to these enslaved patients. By law, slaves had no personal rights and were the property of their owners who held possession of their lives, their bodies, and their labor. Many have also condemned the ethics of Sims’ scientific methods. He operated on these subjects, in some cases repeatedly, without the use of anesthesia. At the time, anesthesia was new to the medical profession, and was first publicly demonstrated at Massachusetts General Hospital in 1846. - New York City Department of Parks & Recreation 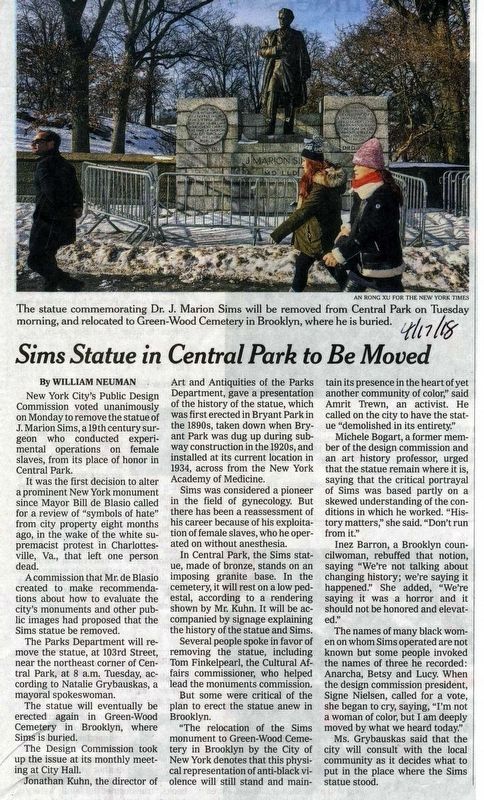 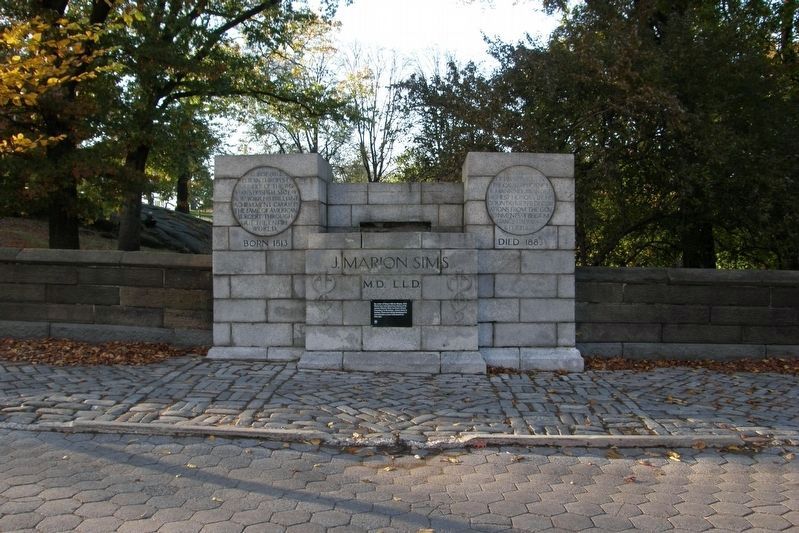 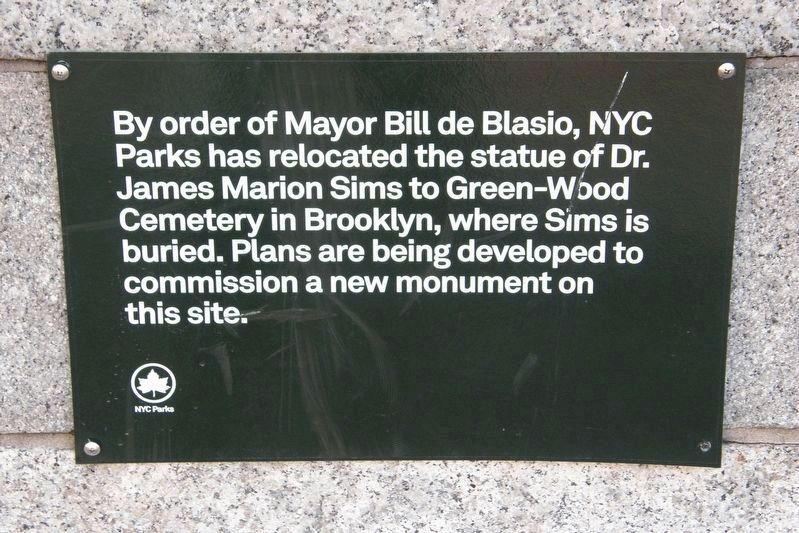 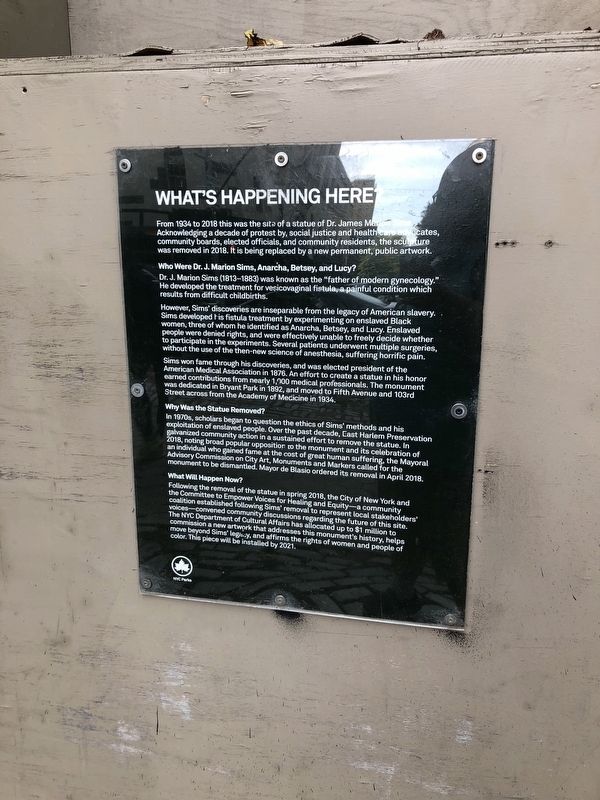