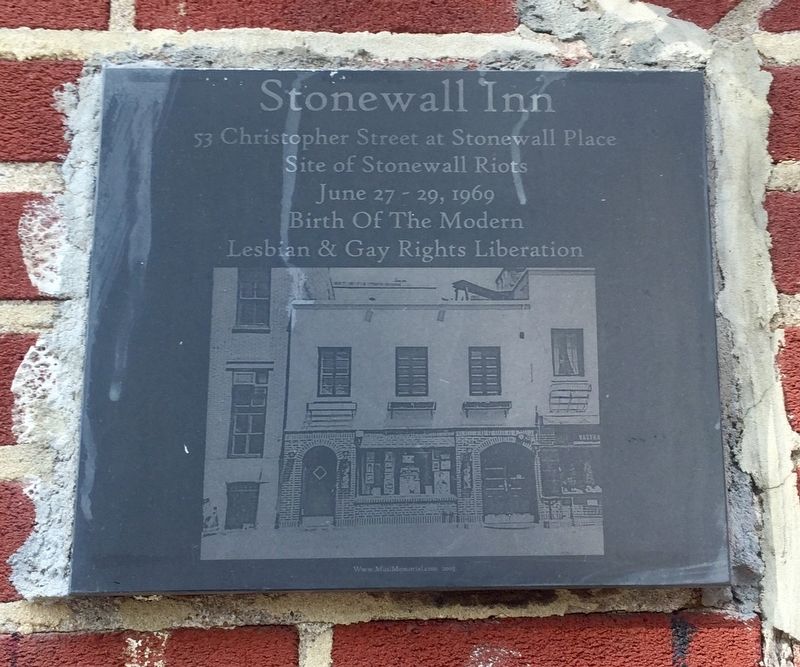 Topics. This historical marker is listed in this topic list: Civil Rights. A significant historical date for this entry is June 27, 1969. 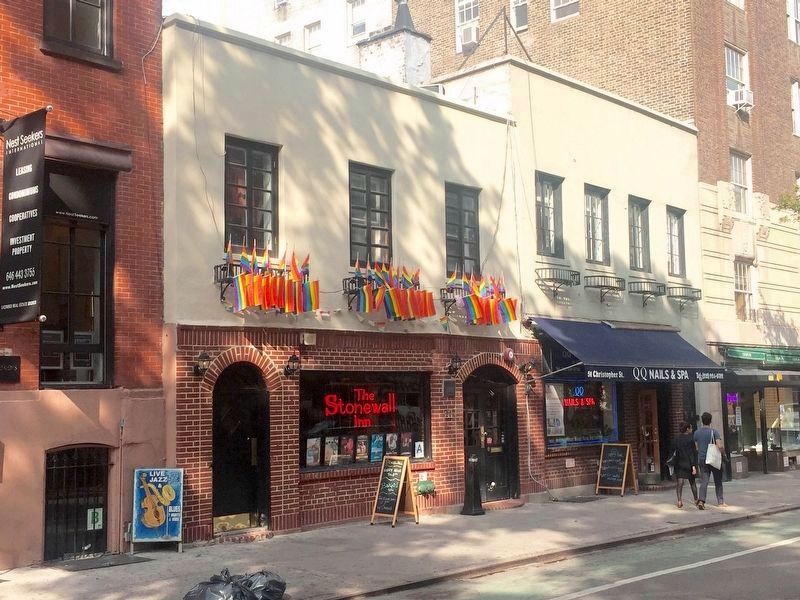 Photographed By Andrew Ruppenstein, October 3, 2016
2. Stonewall Inn and Marker - Wide View
The marker is visible here, located high and just to the left of the entrance.

The Stonewall Inn was not a fancy establishment -- even its regular customers described it as a dive. Operated by the Mafia, the bar served watered-down drinks without a liquor license. Its two dark rooms had no running water -- just a tub where the drinking glasses were rinsed for reuse. The Stonewall Inn was, however, one of the only places gay people in New York City could socialize, providing a rare haven where they could drink, dance to the jukebox, and be themselves. -- Introduction: Stonewall Riots, American Experience, PBS

2. Civil Rights at Stonewall National Historic Landmark (National Park Service). (Submitted on October 15, 2016.)
3. Announcing the Stonewall National Monument (Youtube.com, The White House, 4 mins.). "I’m designating the Stonewall National Monument as the newest addition to America’s national parks system. Stonewall will be our first national monument to tell the story of the struggle for LGBT rights. I believe our national parks should reflect the full story of our country – the richness and diversity and uniquely American spirit that has always defined us. That we are stronger together. That out of many, we are one." - President Barack Obama (Submitted on October 15, 2016.) 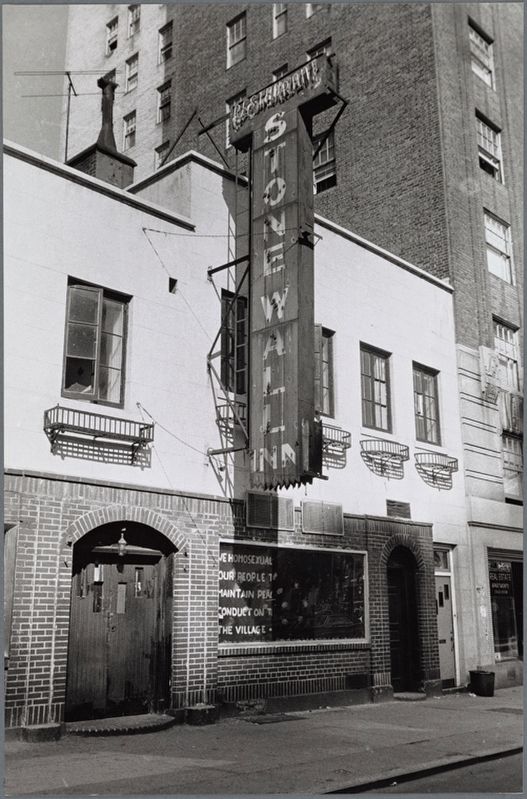 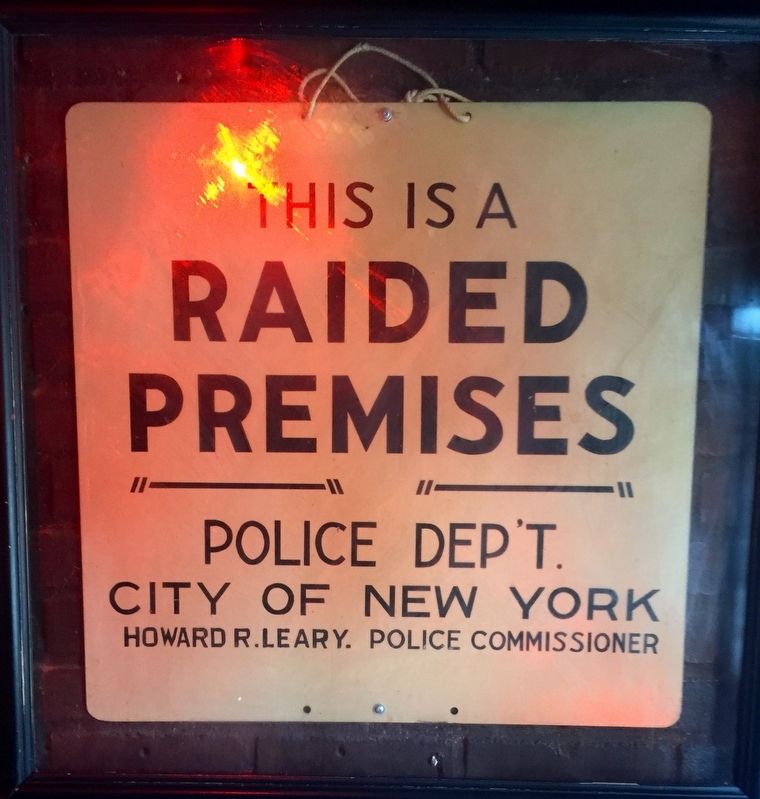 Photographed By Andrew Ruppenstein, October 3, 2016
4. Raided Premises Sign
The above sign is found inside the Stonewall Inn. Howard Leary was police commissioner at the time of the Stonewall Riots.

...New York City had the largest gay population in the United States. It was also the city that most aggressively upheld anti-sodomy laws. In the mid-1960s New York created police vice squads to raid gay bars and baths, and began using decoys to solicit and entrap gays. By 1966 over 100 men a week were arrested as a result of this effort. "It was a nightmare for the lesbian or gay man who was arrested and caught up in the juggernaut but it was also a nightmare for the lesbians or gay men who lived in the closet," Yale Law School professor William Eskridge says in the film. "This produced an enormous amount of anger within the lesbian and gay community in New York City. Eventually something was bound to blow." -- Introduction: Stonewall Uprising, American Experience, PBS 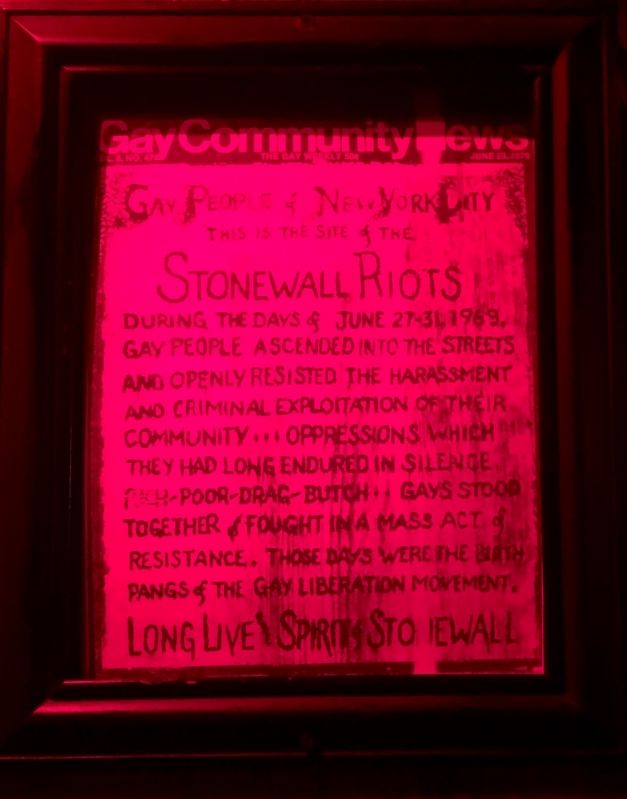