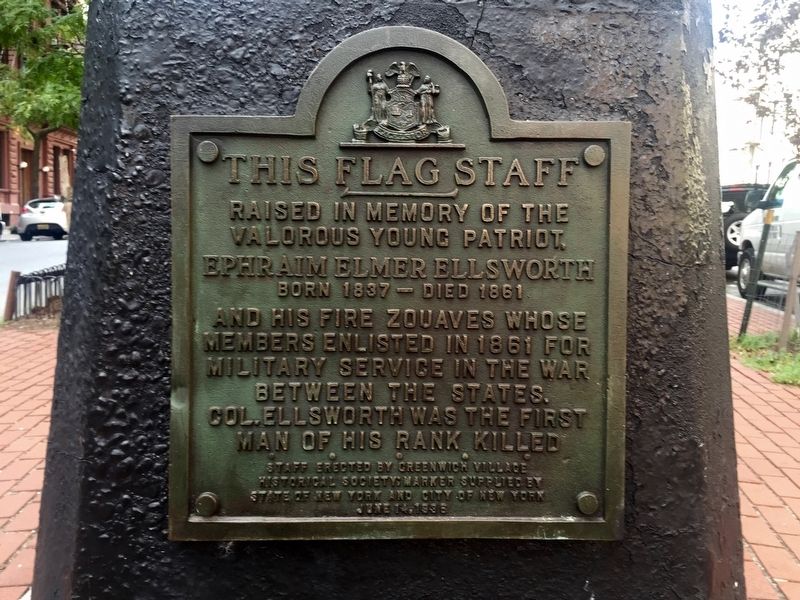 Photographed By Andrew Ruppenstein, October 3, 2016
1. Ephraim Ellsworth and the New York Fire Zouaves Marker
Inscription.
Ephraim Ellsworth and the New York Fire Zouaves. .
This Flag Staff raised in memory of the valorious young patriot, Ephraim Elmer Ellsworth Born 1837 - Died 1861 and his Fire Zouaves whose members enlisted in 1861 for military service in The War Between the States. Colonel Ellsworth was the first man of his rank to be killed., Staff erected by Greenwich Village Historical Society; Marker supplied by State of New York and City of New York June 14, 1938 . . This historical marker was erected in 1938 by State of New York, City of New York. It is in New York in New York County New York

This Flag Staff
raised in memory of the
valorious young patriot,
Ephraim Elmer Ellsworth
Born 1837 - Died 1861
and his Fire Zouaves whose
members enlisted in 1861 for
military service in The War
Between the States.
Colonel Ellsworth was the first
man of his rank to be killed.

Topics. This memorial is listed in this topic list: War, US Civil. A significant historical year for this entry is 1837.

Location. 40° 44.02′ N, 74° 0.111′ W. Marker is in New York, New York, in New York County. Memorial is at the intersection of Grove Street and Christopher Street on Grove Street. The marker is within the boundaries of Christopher Park/Stonewall National Monument, but outside the fence, at the very easternmost point. Or in other words, this marker is accessible from the street, but 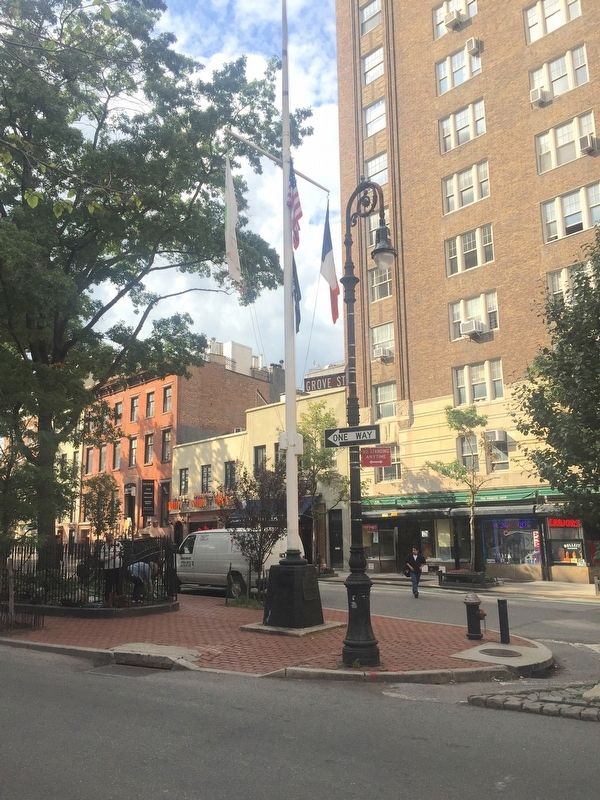 Photographed By Andrew Ruppenstein, October 3, 2016
2. Ephraim Ellsworth and the New York Fire Zouaves Marker - Wide View
The marker is visible here mounted to the base of the flag staff.

Click or scan to see
this page online
not from within the fenced area of the park. Touch for map. Marker is in this post office area: New York NY 10014, United States of America. Touch for directions. 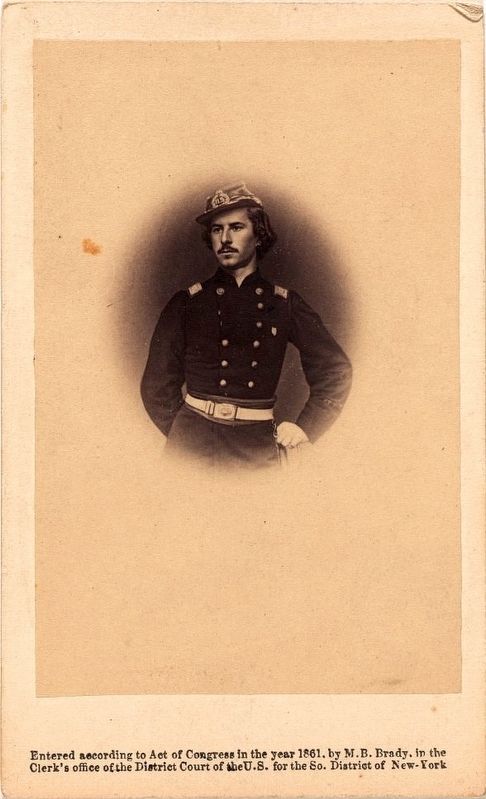 Photographed By Matthew Brady, 1861
3. E.E. Ellsworth, late colonel of N.Y Fire Zouaves
Image courtesy of the Library of Congress. (Click on picture to enlarge.)
Virginia, from July 16, 1861; in New York harbor and Westchester county, from September, 1861; at Newport News, Va., from October, 1861; at New York city from May 7, 1862, where commanded by Lieut.-Col. Joseph E. MacFarland, it was honorably discharged and mustered out June 2, 1862.... The regiment (1st organization) lost by death, killed in action, 1 officer, 33 enlisted men; died of wounds received in action; 1 officer, 2 enlisted men; died of disease and other causes, 4 officers, 8 enlisted men; total, 6 officers, 43 enlisted men; aggregate, 49; of whom 3 enlisted men died in the hands of the enemy. (Submitted on October 15, 2016.)

2. The Death of Colonel Ellsworth (Smithsonian Magazine, April 2011). On May 24, 1861, the day after Virginia voters ratified the state convention’s decision to secede from the Union, Ellsworth and his troops entered Alexandria, Virginia, to assist in the occupation of the city. As it happened, an 8- by 14-foot Confederate flag—large enough to be seen by spyglass from the White House—had been visible in Alexandria for weeks, flown from the roof of an inn, the Marshall House. The regiment, organized only six weeks earlier, encoun­tered no resistance as it moved through the city. Barber notes, however, that “the Zouaves were an unruly bunch, spoiling for a fight, and when they got into Alexandria they may have felt they were already in the thick of it. So

Internet Archive
4. Uniform of the 11th New York Fire Zouaves
from Underwood & Buel, Battles and Leaders of the Civil War, Vol. 1.
Ellsworth may have wanted to get that flag down quickly to prevent trouble.” At the Marshall House, Barber adds, “Colonel Ellsworth just happened to meet the one person he didn’t want to meet”—innkeeper James Jackson, a zealous defender of slavery (and, says Barber, a notorious slave abuser) with a penchant for violence. Ellsworth approached the inn with only four troopers. Finding no resistance, he took down the flag, but as he descended to the main floor, Jackson fired on Ellsworth at point-blank range with a shotgun, killing him instantly. One of Ellsworth’s men, Cpl. Francis Brownell, then fatally shot Jackson. A reporter from the New York Tribune happened to be on the scene; news of the shootings traveled fast. Because Ellsworth had been Lincoln’s friend, his body was taken to the White House, where it lay in state, and then to New York City, where thousands lined up to view the cortege bearing Ellsworth’s coffin. Along the route, a group of mourners displayed a banner that declared: “Ellsworth, ‘His blood cries for vengeance.’” “Remember Ellsworth!” became a Union rallying cry, and the 44th New York Volunteer Infantry Regiment was nicknamed Ellsworth’s Avengers. According to Barber, “Throughout the conflict, his name, face and valor would be recalled on stationery, in sheet music and in memorial lithographs.”... 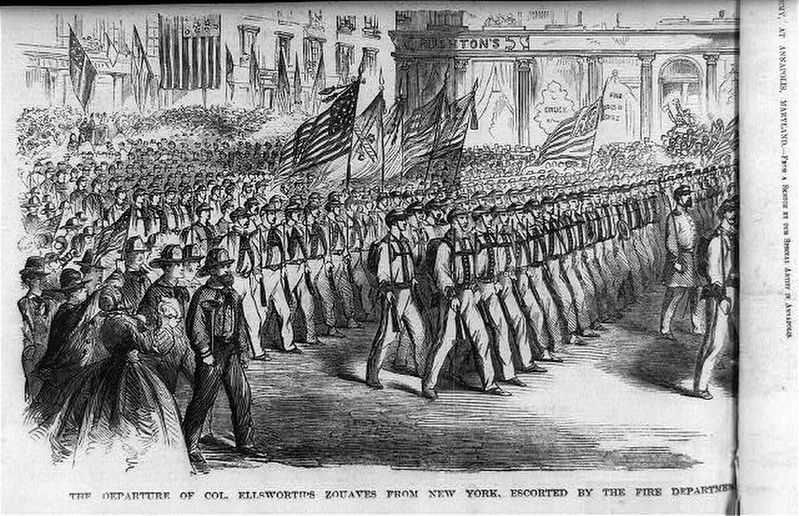