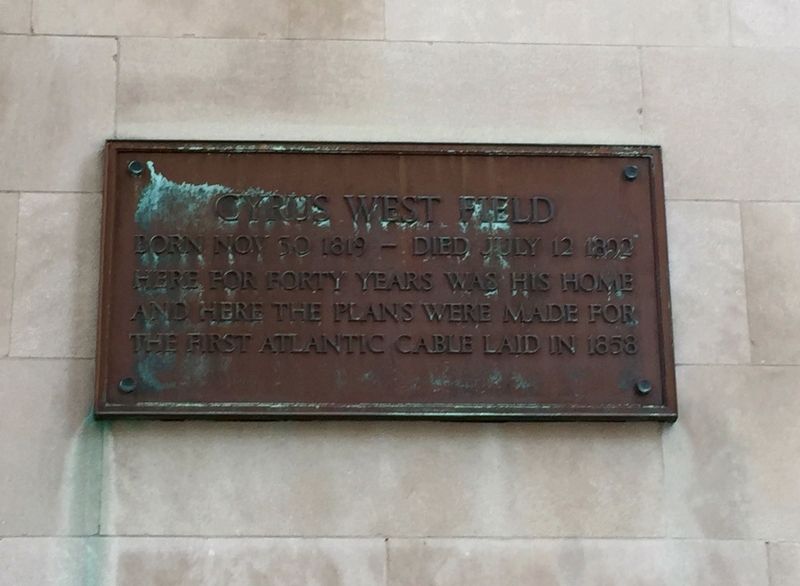 Photographed By Andrew Ruppenstein, October 3, 2016
1. Cyrus West Field Marker
Inscription.
Cyrus West Field. Born Nov 30 1819 - Died July 12 1892. Here for forty years was his home and here the plans were made for the first transatlantic cable laid in 1858 . This historical marker is in New York in New York County New York

Topics. This historical marker is listed in this topic list: Communications. A significant historical date for this entry is November 30, 1819.

More about this marker. The marker is located at the site of his residence, and not the actual residence - that building having been torn down and replaced with the current building. 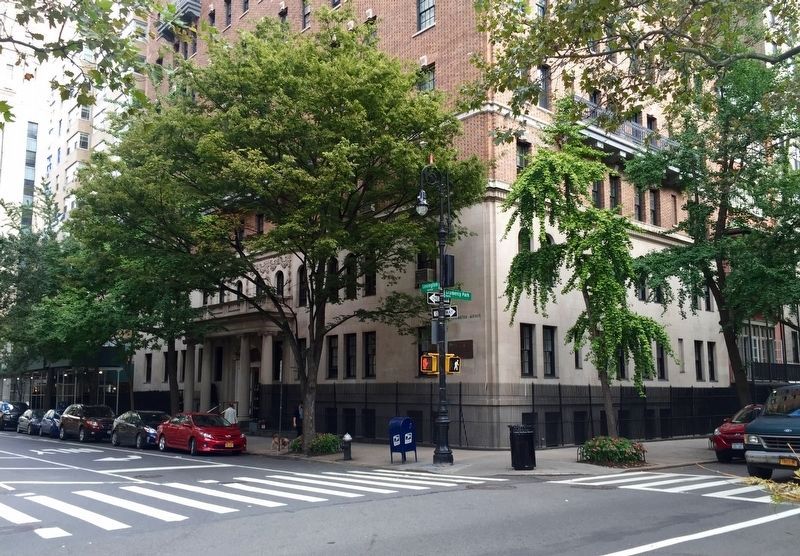 Photographed By Andrew Ruppenstein, October 3, 2016
2. Cyrus West Field Marker - Wide View
The marker is visible here on the corner of the building.

Click or scan to see
this page online
...In 1854 Field began the quest to lay a telegraphic cable across the Atlantic Ocean. After several failed attempts, in August 1858 Field arranged for Queen Victoria to send the first transatlantic message to President James Buchanan, and New York erupted in celebrations, lauding Field, telegraph inventor Samuel F. B. Morse, modern technology, and American ingenuity in general. But the cable broke after just three weeks, and Field did not complete his project until 1866.... (Submitted on October 18, 2016.) 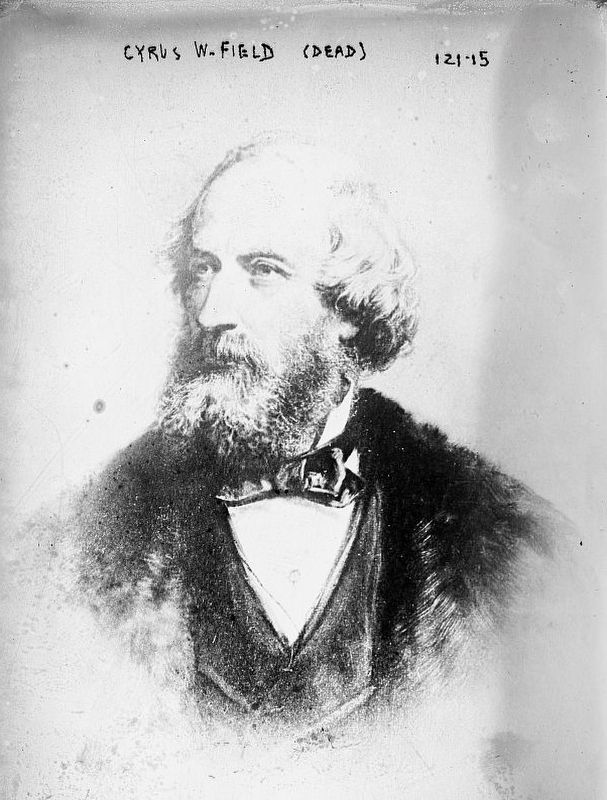 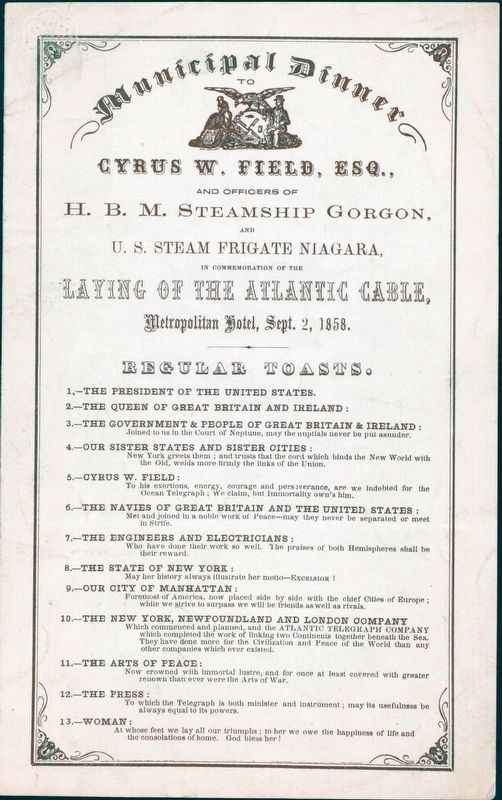 1858
4. MUNICIPAL DINNER TO CYRUS W. FIELD,ESQ. [held by] METROPOLITAN HOTEL...
The schedule of toasts for the Municipal Dinner held in honor of the laying of the transatlantic cable. Image courtesy of the New York City Public Library digital collections. (Click on image to enlarge) 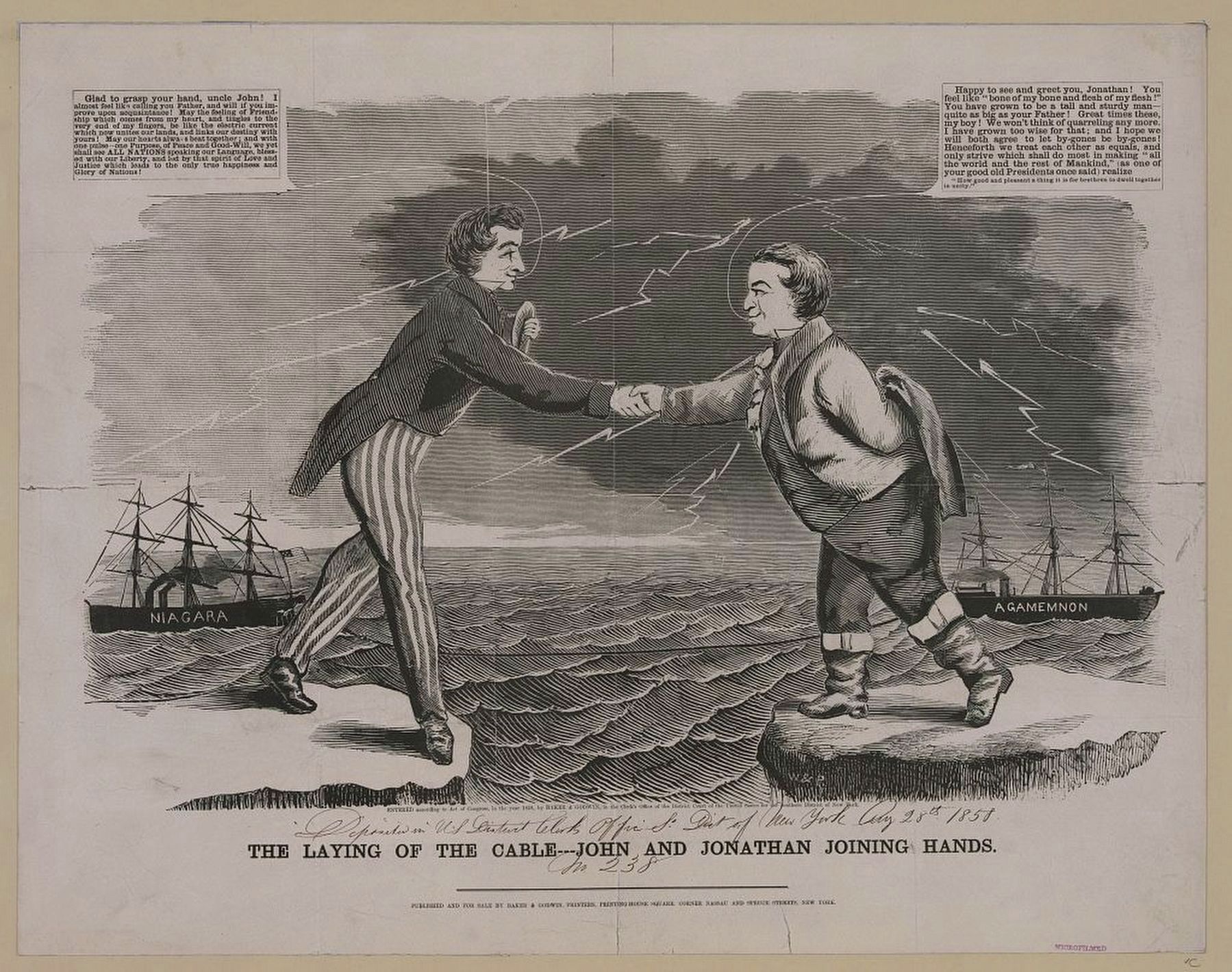 Baker & Godwin, Printers, New York (Image courtesy of the Library of Congress), 1858
5. The laying of the cable---John and Jonathan joining hands
A crude but engaging picture, celebrating the goodwill between Great Britain and the United States generated by the successful completion of the Atlantic telegraph cable between Newfoundland and Valentia Bay (Ireland). Laid by the American steamer "Niagara" and British steamer "Agamemnon" (which appear in the background of the print), the cable transmitted its first message on August 17, 1858. The artist shows Brother Jonathan (left) shaking hands with John Bull. The two figures stand on opposite shores, set against a stormy, lightning-streaked sky over a choppy sea. "Brother Jonathan: "Glad to grasp your hand, uncle John! I almost feel like calling you Father, and will if you improve upon acquaintance! May the feeling of Friendship . . . be like the electric current which now unites our lands, and links our destiny with yours! May our hearts always beat together; and with one pulse--one Purpose, of Peace and Good-Will, we yet shall see ALL NATIONS speaking our Language, blessed with our Liberty, and led by that spirit of Love and Justice which leads to the only true happiness and Glory of Nations!" John Bull: "Happy to see and greet you, Jonathan! You feel like 'bone of my bone and flesh of my flesh!' You have grown to be a tall and sturdy man--quite as big as your Father! Great times these, my boy! We won't think of quarreling any more. I have grown too wise for that; and I hope we will both agree to let by-gones be by-gones! Henceforth we treat each other as equals, and only strive which shall do most in making 'all the world and the rest of Mankind' (as one of your good old Presidents once said) realize 'How good and pleasant a thing it is for brethren to dwell together in unity.'" - Library of Congress
Credits. This page was last revised on April 9, 2020. It was originally submitted on October 16, 2016, by Andrew Ruppenstein of Sacramento, California. This page has been viewed 255 times since then and 37 times this year. Photos:   1, 2, 3. submitted on October 17, 2016, by Andrew Ruppenstein of Sacramento, California.   4, 5. submitted on October 18, 2016, by Andrew Ruppenstein of Sacramento, California. • Bill Pfingsten was the editor who published this page.
Share this page.