“These Are My Jewels” 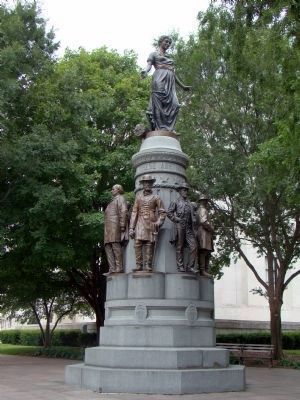 Photographed By J. J. Prats, July 12, 2008
1. “These are my Jewels” Monument
Bronzes by Levi T Scofield (1842–1917). Overall height of monument is approx 31 feet. The female figure is approx 11 feet tall. Male figures vary in height, averaging approx 7½ feet in height. The base is gray granite.
Inscription.
“These Are My Jewels”. . General Ulysses S. Grant . General Philip Sheridan . Edwin M. Stanton . James A. Garfield . Rutherford B. Hayes . Salmon P. Chase . General William T. Sherman . This historical marker was erected in 1893 by the State of Ohio. It is in Columbus in Franklin County Ohio

Topics and series. This historical marker is listed in this topic list: War, US Civil. In addition, it is included in the Former U.S. Presidents: #19 Rutherford B. Hayes series list. 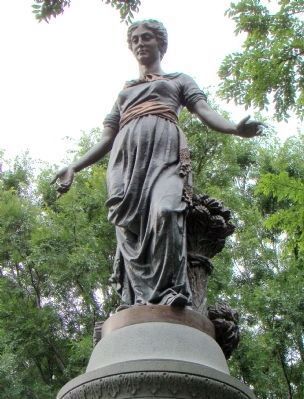 More about this marker. Monument was first erected at the World’s Columbian Exposition in Chicago in 1893 with only six of Ohio’s seven jewels. Rutherford B. Hayes was added when it was reinstalled here on Capitol Square the following year.

Regarding “These Are My Jewels”. The female figure symbolizing Ohio is Cornelia, the Roman mother of lore whose rich friends mocked her lack of jewelry. In response she presented her sons as her “jewels.” They later ruled Rome.

Ohio’s most prominent 19th century sons, her jewels, are:

Photographed By J. J. Prats, July 12, 2008
3. Gen. Ulysses S. Grant
President of the United States (1869–1877). He achieved international fame as the leading Union General in the American Civil War. Grant was born in Point Pleasant, Ohio, near Cincinnati on the Ohio River.

Philip Henry Sheridan (1831–1888), a career U.S. Army officer and a Union general in the American Civil War. He grew up in Somerset, in central Ohio.

Edwin McMasters Stanton (1814–1869), an American lawyer, politician, United States Attorney General in 1860-61 and Secretary of War through most of the American Civil War and Reconstruction era. He was born in Steubenville, in eastern Ohio on the Ohio River.

James A. Garfield (1831–1881), the 20th President of the United States (1881), and, as a result of his assassination, served only six months in that office. He was born in Moreland Hills, in northeast Ohio.

Rutherford B. Hayes (1822–1893), an American politician, lawyer, military leader and the nineteenth President of the United States (1877–1881). He was born in the City of Delaware, in central Ohio.

Salmon P. Chase (1808–1873), an American politician and jurist in the Civil War era who served as U.S. Senator from Ohio and Governor of Ohio;

Photographed By J. J. Prats, July 12, 2008
4. Gen. Phillip Sheridan
as U.S. Treasury Secretary under President Abraham Lincoln; and as Chief Justice of the United States. He was a prominent abolitionist. In 1830, he moved to Cincinnati, Ohio, where he quickly gained a position of prominence in law.

William Tecumseh Sherman (1820–1891), an American soldier, businessman, educator, and author. He served as a General in the Union Army during the American Civil War. He was born in Lancaster, in central Ohio.

Also see . . .
1. Ulysses S. Grant. Wikipedia Entry. “Named commanding general of the Federal armies in 1864 [during the Civil War], he implemented a coordinated strategy of simultaneous attacks aimed at destroying the South’s ability to carry on the war. In 1865, after conducting a costly war of attrition in the East, he accepted the surrender of his Confederate opponent Robert E. Lee at Appomattox Court House. Grant has been described by J.F.C. Fuller as ‘the greatest general of his age and one of the greatest strategists of any age.’ His Vicksburg Campaign in particular has been scrutinized by military specialists around the world.

“In 1868, Grant was elected president as a Republican. Grant was the first president to serve for two full terms since Andrew Jackson forty

Photographed By J. J. Prats, July 12, 2008
5. Edwin M. Stanton
years before. He led Radical Reconstruction and built a powerful patronage-based Republican party in the South, with the adroit use of the army. He took a hard line that reduced violence by groups like the Ku Klux Klan.

“Presidential experts typically rank Grant in the lowest quartile of U.S. presidents, primarily for his tolerance of corruption. In recent years, however, his reputation as president has improved somewhat among scholars impressed by his support for civil rights for African Americans. Unsuccessful in winning a third term in 1880, bankrupted by bad investments, and terminally ill with throat cancer, Grant wrote his Memoirs, which were enormously successful among veterans, the public, and the critics.” (Submitted on August 3, 2008.)

2. Philip Sheridan. Wikipedia entry. “His career was noted for his rapid rise to major general and his close association with Lt. Gen. Ulysses S. Grant, who transferred Sheridan from command of an infantry division in the Western Theater to lead the Cavalry Corps of the Army of the Potomac in the East. In 1864, he defeated Confederate forces in the Shenandoah Valley and his destruction of

Photographed By J. J. Prats, July 12, 2008
6. James A. Garfield
the economic infrastructure of the Valley, called ‘The Burning’ by residents, was one of the first uses of scorched earth tactics in the war. In 1865, his cavalry pursued Gen. Robert E. Lee and was instrumental in forcing his surrender at Appomattox.

“Sheridan prosecuted the latter years of the Indian Wars of the Great Plains, tainting his reputation with some historians, who accuse him of racism and genocide. Both as a soldier and private citizen, he was instrumental in the development and protection of Yellowstone National Park.” (Submitted on August 3, 2008.)

3. Edwin M. Stanton. Wikipedia entry. “Stanton was politically opposed to Republican Abraham Lincoln in 1860. After Lincoln was elected president, Stanton agreed to work as a legal adviser to the inefficient Secretary of War, Simon Cameron, whom he replaced on January 15, 1862. He accepted the position only to ‘help save the country.’ He was very effective in administering the huge War Department, but devoted considerable amounts of his energy to the persecution of Union officers whom he suspected of having traitorous sympathies for the South, the most famous of these being

Photographed By J. J. Prats, July 12, 2008
7. Rutherford B. Hayes
Maj. Gen. Fitz John Porter. ... The president recognized Stanton’s ability, but whenever necessary Lincoln managed to ‘plow around him.’ ... Yet, when pressure was exerted to remove the unpopular secretary from office, Lincoln replied, ‘If you will find another secretary of war like him, I will gladly appoint him’.” (Submitted on August 3, 2008.)

4. James A. Garfield. Wikipedia entry. “Prior to his election as president, Garfield served as a major general in the United States Army and as a member of the U.S. House of Representatives, and as a member of the Electoral Commission of 1876. Garfield was the second U.S. President to be assassinated—Abraham Lincoln was the first. President Garfield, a Republican, had been in office a scant four months when he was shot and fatally wounded on July 2, 1881. He lived until September 19, having served for six months and fifteen days. Only William Henry Harrison, who served in office for only thirty-one days, had a shorter presidency. To date, Garfield is the only sitting member of the House of Representatives to have been elected President.” (Submitted on August 3, 2008.)

Photographed By J. J. Prats, July 12, 2008
8. Salmon P. Chase
Wikipedia entry. “Hayes was elected President by one electoral vote after the highly disputed election of 1876. Losing the popular vote to his opponent, Samuel Tilden, Hayes was the only president whose election was decided by a congressional commission.” (Submitted on August 3, 2008.)

6. Salmon P. Chase. Wikipedia entry. “Chase articulated the ‘Slave Power conspiracy’ thesis well before Lincoln did ... He devoted his enormous energies to the destruction of what he considered the Slave Power—the conspiracy of Southern slave owners to seize control of the federal government and block the progress of liberty.”

“From his defense of escaped slaves seized in Ohio for rendition to slavery (under the Fugitive Slave Law of 1793) he was dubbed the Attorney General for Fugitive Slaves. His argument in the famous Jones v. Van Zandt case testing the constitutionality of fugitive slave laws before the U.S. Supreme Court attracted particular attention (though in this as in other cases of the kind the judgment was against him, and John Van Zandt’s conviction upheld). ... During his service in the Senate (1849–1855) he was pre-eminently the champion of anti-slavery in that body, and no one

7. William Tecumseh Sherman. Wikipedia Entry. “He served as a general in the Union Army during the American Civil War (1861–65), for which he received recognition for his outstanding command of military strategy and criticism for the harshness of the ‘scorched earth’ policies that he implemented in conducting total war against the Confederate States. Military historian Basil Liddell Hart famously declared that Sherman was ‘the first modern general.’

Sherman served under General Ulysses S. Grant in 1862 and 1863 during the campaigns that led to the fall of the Confederate stronghold of Vicksburg on the Mississippi River and culminated with the routing of the Confederate armies in the state of Tennessee. In 1864, Sherman succeeded Grant as the Union commander in the western theater of the war. He proceeded to lead his troops to the capture of the city of Atlanta, a military success that contributed decisively to the re-election of President Abraham Lincoln. Sherman’s subsequent march through Georgia and the Carolinas further undermined the Confederacy’s ability to continue 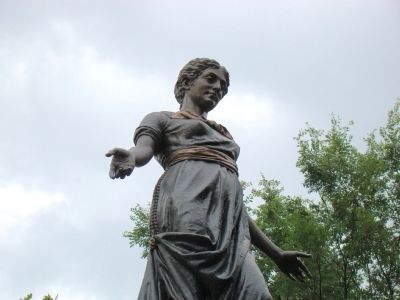 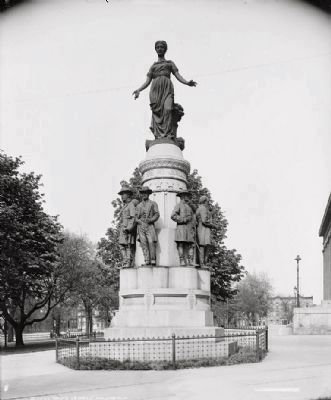