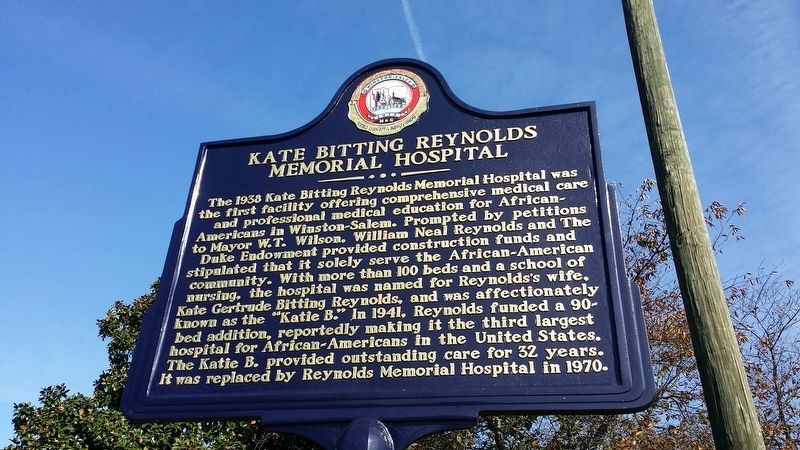 The 1938 Kate Bitting Reynolds Memorial Hospital was the first facility offering comprehensive medical care and professional medical education for African-Americans in Winston-Salem. Prompted by petitions to Mayor W.T. Wilson, William Neal Reynolds and The Duke Endowment provided construction funds and stipulated that it solely serve the African-American community. With more than 100 beds and a school of nursing, the hospital was named for Reynolds's wife, Kate Gertrude Bitting Reynolds, and was affectionately known as the "Katie B." In 1941, Reynolds funded a 90-bed addition, reportedly making it the third largest hospital for African-Americans in the United States. The Katie B. provided outstanding care for 32 years. It was replaced by Reynolds Memorial Hospital in 1970.

Topics. This historical marker is listed in these topic lists: African Americans • Charity & Public Work • Science & Medicine. A significant historical year for this entry is 1938. 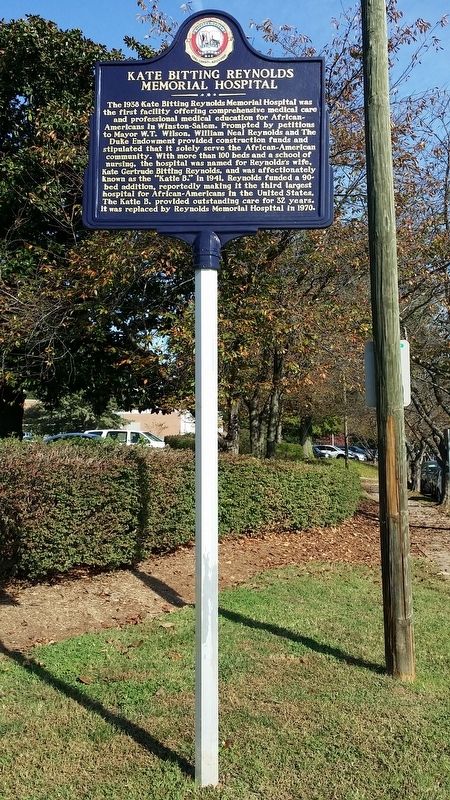 Click or scan to see
this page online
is in Winston-Salem, North Carolina, in Forsyth County. Marker is at the intersection of North Cleveland Avenue and 7th Street, on the right when traveling south on North Cleveland Avenue. Touch for map. Marker is in this post office area: Winston Salem NC 27101, United States of America. Touch for directions.

Other nearby markers. At least 8 other markers are within walking distance of this marker. East Winston Library (a few steps from this marker); Winston Mutual Life Insurance Building (about 700 feet away, measured in a direct line); Winston-Salem Chapter of the Black Panther Party (approx. 0.2 miles away); Tobacco Unionism (approx. ¼ mile away); Phi Omega Chapter, Alpha Kappa Alpha Sorority, Incorporated (approx. ¼ mile away); R.J.R. Labor Strikes (approx. 0.4 miles away); Belews Street Neighborhood (approx. 0.4 miles away); Reynoldstown Historic District (approx. half a mile away). Touch for a list and map of all markers in Winston-Salem. 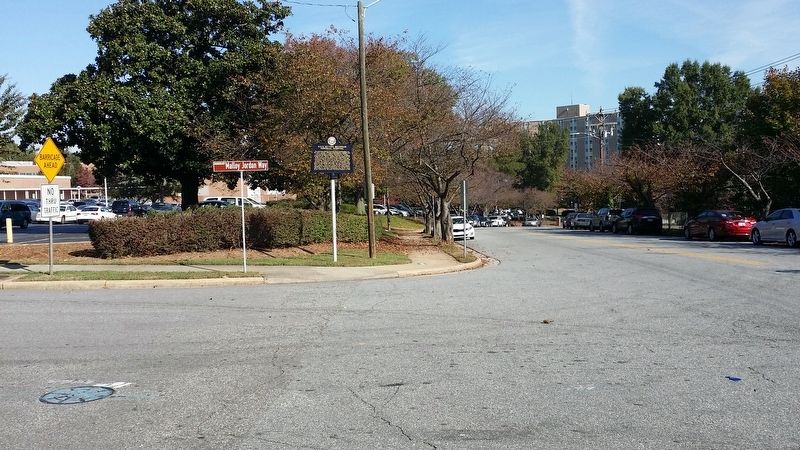