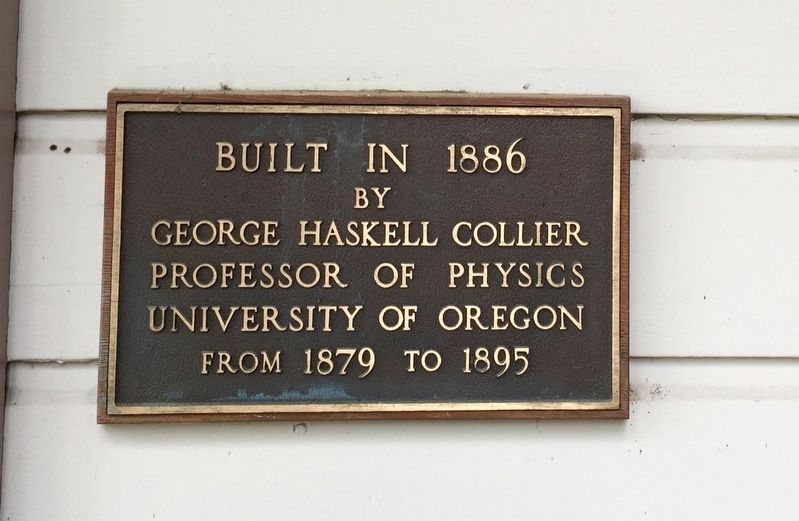 By Andrew Ruppenstein, October 26, 2016
1. The Collier House Marker
Inscription.
The Collier House. .
Built in 1886 by George Haskell Collier Professor of Physics University of Oregon from 1879 to 1895 . . This historical marker is in Eugene in Lane County Oregon

More about this marker. The marker is located on the campus of the University of Oregon in Eugene. 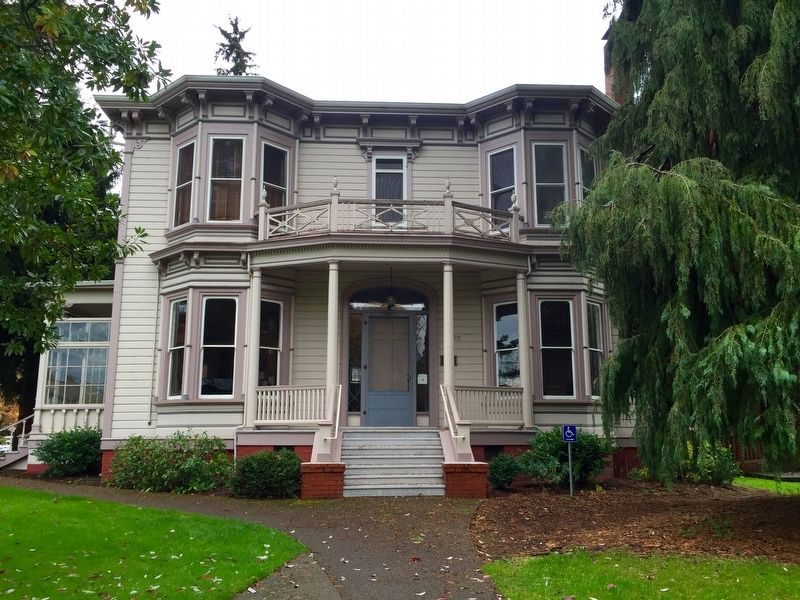 By Andrew Ruppenstein, October 26, 2016
2. The Collier House and Marker
The marker is mounted to the right of the front door, with the edges of it being visible just behind the right-hand pillar.
Collier House Historic Resource Survey Form (Oregondigital.org). Dr. George Haskell Collier was a Physics professor at the University of Oregon from 1879-1895 and had bought 9.5 acres of land adjacent to the school for his family’s residence. The Collier House was completed in May 1886, probably by the Collier family and based on pattern books and/or builder’s guides for the layout and style; no architect or builder is documented. Some people suggest a stylistic influence of architect Warren Haywood Williams, however, there is no documentation to verify this link. The original house had no indoor plumbing but did have a fountain. There was extensive surrounding vegetation, including an orchard. According to the Collier House Restoration Proposal, remnants of the original landscape include the false cypress, sitka spruce, big leaf maple, Japanese maple, English Holly. In addition, the memorial hedge, donated in 1925 memory of Prince Lucien Campbell, is intact. Soon after the house was completed, it began to play a central role for community gatherings, meetings and parties. In 1896, Professor Collier retired from the University and sold the house, barn and acreage to the school for $5,000. At this point, the UO President Charles Hiram Chapman moved into the upstairs with his family and the University library holdings were moved into the downstairs. From 1896-1900, the building was referred to as South Hall. In 1900, the Board of Regents voted to have it permanently house the university president and thus it became the President’s House.... (Submitted on October 29, 2016.)
Credits. This page was last revised on October 30, 2016. It was originally submitted on October 29, 2016, by Andrew Ruppenstein of Sacramento, California. This page has been viewed 178 times since then and 8 times this year. Photos:   1, 2. submitted on October 29, 2016, by Andrew Ruppenstein of Sacramento, California.
Share This Page.