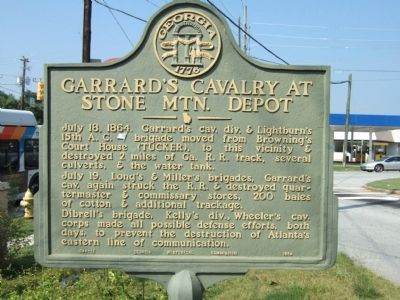 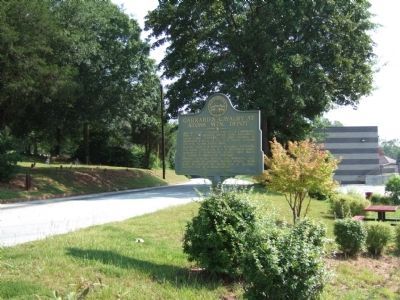 By Felch Dumas, August 3, 2008
2. Garrard's Cavalry at Stone Mtn. Depot Marker
This view is towards the marker northeast up Silver Hill Road. The cemetery is to the left.
Marker is in this post office area: Stone Mountain GA 30087, United States of America. Touch for directions.

Other nearby markers. At least 8 other markers are within 4 miles of this marker, measured as the crow flies. Unknown Confederate Dead (within shouting distance of this marker); Stone Mountain Cemetery (about 300 feet away, measured in a direct line); Stone Mountain - Confederate Memorial (approx. 1.6 miles away); The Country Comes Before Me (approx. 1.6 miles away); The March to the Sea (approx. 1.8 miles away); Covered Bridge (approx. 2.2 miles away); Hightower (Etowah) Trail (approx. 2.7 miles away); Garrard & Lightburn to Stone Mountain (approx. 3.8 miles away). Touch for a list and map of all markers in Stone Mountain.
Credits. This page was last revised on June 8, 2020. It was originally submitted on August 4, 2008, by Felch Dumas of Decatur, Georgia. This page has been viewed 1,110 times since then and 18 times this year. Photos:   1, 2. submitted on August 4, 2008, by Felch Dumas of Decatur, Georgia. • Craig Swain was the editor who published this page.
Share This Page.