The Battle of Hartville 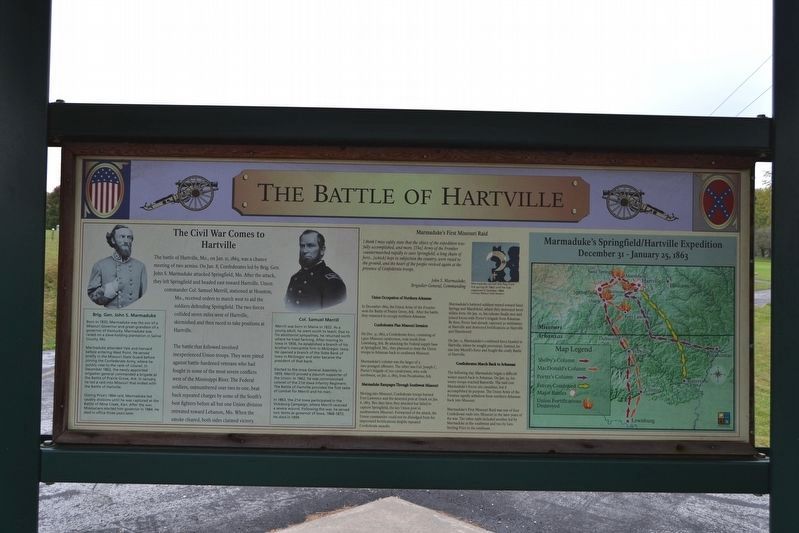 (LEFT PANEL)
The Battle of Hartville

The Civil War Comes to Hartville

The battle of Hartville, Mo., on Jan. 11, 1863, was a chance meeting of two armies. On Jan. 8, Confederates led by Brig. Gen. John S. Marmaduke attacked Springfield, Mo. After the attack, they left Springfield and headed east toward Hartville. Union commander Col. Samuel Merrill, stationed at Houston, Mo., received orders to march west to aid the soldiers defending Springfield. The two forces collided seven miles west of Hartville, skirmished and then raced to take positions at Hartville.

The battle that followed involved inexperienced Union troops. They were pitted against battle-hardened veterans who had fought in some of the most severe conflicts west of the Mississippi River. The Federal soldiers, outnumbered over two to one, beat back repeated charges by some of the South’s best fighters before all but one Union division retreated toward Lebanon, Mo. When the smoke cleared, both sides claimed victory.

Born in 1833, Marmaduke was the son of a Missouri 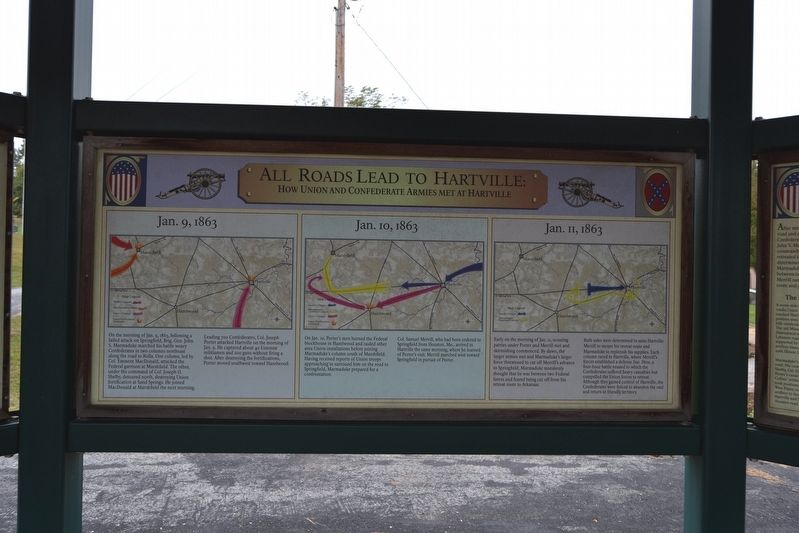 Click or scan to see
this page online
Governor and great-grandson of a governor of Kentucky. Marmaduke was raised on a slave-holding plantation in Saline County, Mo.

Marmaduke attended Yale and Harvard before entering West Point. He served briefly in the Missouri State Guard before joining the Confederate Army, where he quickly rose to the rank of colonel. In December 1862, the newly appointed brigadier general commanded a brigade at the Battle of Prairie Grove, Ark. In January, he led a raid into Missouri that ended with the Battle of Hartville.

During Price’s 1864 raid, Marmaduke led cavalry divisions until he was captured at the Battle of Mine Creek, Kan. After the war, Missourians elected him governor in 1884. He died in office three years later.

Merrill was born in Maine in 1822. As a young adult, he went south to teach. Due to his abolitionist sympathies, he returned north where he tried farming. After moving to Iowa in 1856, he established a branch of his brother’s mercantile firm in McGregor, Iowa. He opened a branch of the State Bank of Iowa in McGregor and later became the president of that bank.

Elected to the Iowa General Assembly in 1859, Merrill proved a staunch supporter of the Union. In 1862, he was commissioned colonel of the 21st Iowa Infantry Regiment. The Battle of Hartville provided the first taste of combat for Merrill 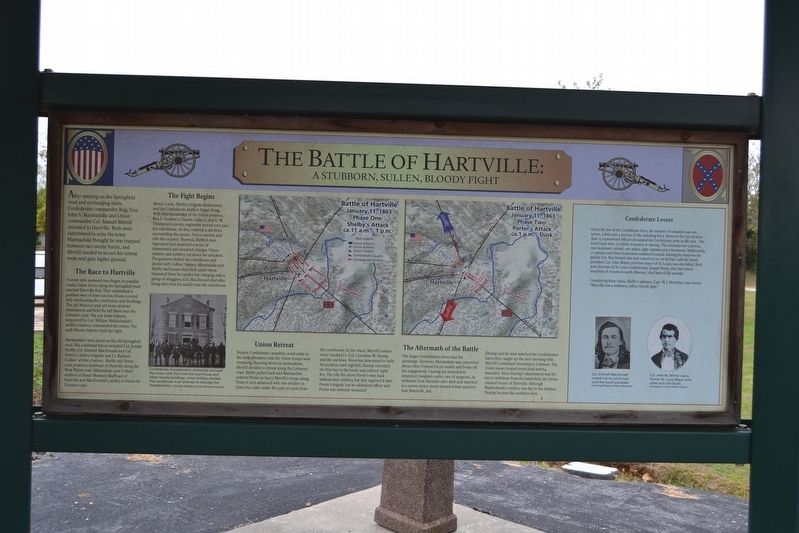 Photographed By Duane Hall, October 14, 2016
3. The Battle of Hartville Marker
Right Panel
A Stubborn, Sullen, Bloody Fight
and his men.

I think I may safely state that the object of the expedition was fully accomplished, and more. [The] Army of the Frontier countermarched rapidly to save Springfield; a long chain of forts ... [which] kept in subjection the country, were razed to the ground, and the heart of the people revived again at the presence of Confederate troops.
John S. Marmaduke, Brigadier-General, Commanding

In December 1862, the Union Army of the Frontier won the Battle of Prairie Grove, Ark. After the battle, they remained to occupy northern Arkansas.

On Dec. 31, 1862, a Confederate force, consisting of 1,900 Missouri cavalrymen, rode north from Lewisburg, Ark. By attacking the Federal supply base at Springfield, Mo., they planned to draw the Union troops in Arkansas back to southwest Missouri.

Marmaduke’s column was the larger of a two-pronged offensive. The other was Col. Joseph C. Porter’s brigade of 700 cavalrymen, who rode northwest, on Jan 2, 1863, from Pocahontas, Ark. 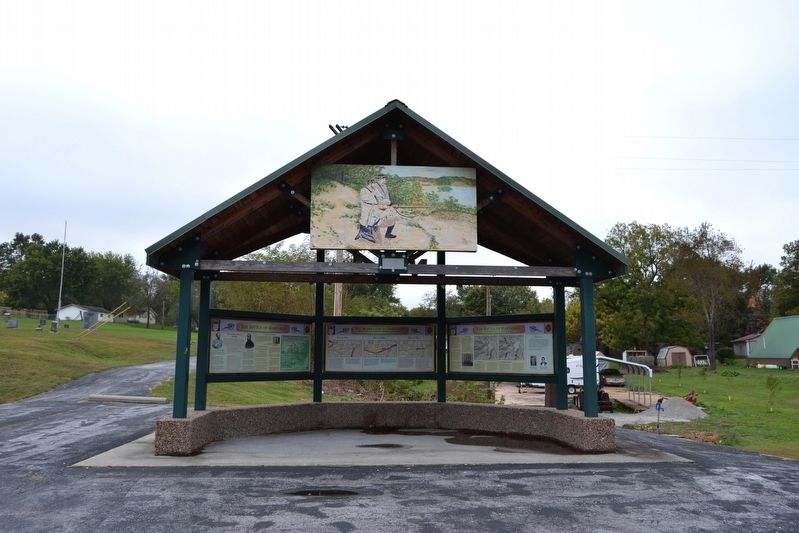 Moving into Missouri, Confederate troops burned Fort Lawrence and the deserted post at Ozark on Jan. 6, 1863. Two days later, they attacked but failed to capture Springfield, the key Union post in southwestern Missouri. Forwarned of the attack, the Union commander could not be dislodged from his improvised fortifications despite repeated Confederate assaults.

Marmaduke’s battered soldiers veered toward Sand Springs and Marshfield, where they destroyed more militia forts. On Jan. 10, his column finally met and joined forces with Porter’s brigade from Arkansas. By then, Porter had already captured 50 militiamen at Hartville and destroyed fortifications at Hartville and Hazelwood.

On Jan. 11, Marmaduke’s combined force headed to Hartville, where he sought provisions. Instead, he ran into Merrill’s force and fought the costly Battle of Hartville.

Confederates March Back to Arkansas

The following day, Marmaduke began a difficult winter march back to Arkansas. On Jan. 25, his weary troops reached Batesville. The raid cost Marmaduke’s forces 262 casualties, but it accomplished its purpose. The Union Army of the Frontier rapidly withdrew from northern Arkansas back into Missouri.

Marmaduke’s First Missouri Raid was one of four Confederate raids into Missouri in the later years of the war. 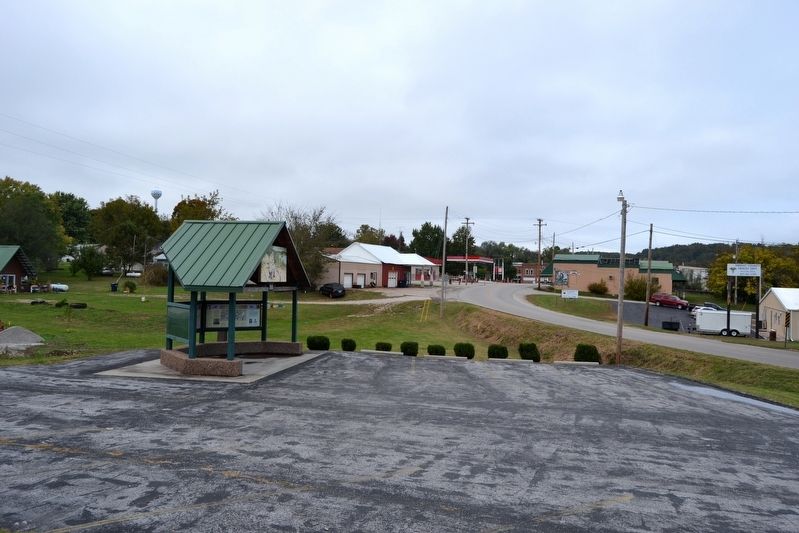 Photographed By Duane Hall, October 14, 2016
5. View to North Towards Downtown Hartville
Courthouse grounds are located at top of the hill behind the convenience store/service station
The other raids included another led by Marmaduke in the southwest and two by Gen. Sterling Price in the southeast.

(CENTER PANEL)
All Roads Lead to Hartville:
How Union and Confederate Armies Met at Hartville

Jan. 9, 1863
On the morning of Jan. 9, 1863, following a failed attack on Springfield, Brig. Gen. John S. Marmaduke marched his battle weary Confederates into two columns northeast along the road to Rolla. One column, led by Col. Emment MacDonald, attacked the Federal garrison at Marshfield. The other, under the command of Col. Joseph O. Shelby, detoured north, destroying Union fortification at Sand Springs. He joined MacDonald at Marshfield the next morning.

Leading 700 Confederates, Col. Joseph Porter attacked Hartville on the morning of Jan. 9. He captured about 40 Unionist militiamen and 200 guns without firing a shot. After destroying the fortifications, Porter moved southwest toward Hazelwood.

Jan. 10, 1863
On Jan. 10, Porter’s men burned the Federal blockhouse in Hazelwood and raided other area Union installations before joining Marmaduke’s column south of Marshfield. Having received reports of Union troops approaching to surround him on the road to Springfield, Marmaduke prepared for a confrontation.

Col. Samuel Merrill, who had been ordered to Springfield from Houston, Mo., arrived in Hartville the same morning, where he learned of Porter’s visit. Merrill marched west toward Springfield in pursuit of Porter.

Jan. 11, 1863
Early on the morning of Jan. 11, scouting parties under Porter and Merrill met and skirmishing commenced. By dawn, the larger armies met and Marmaduke’s larger force threatened to cut off Merrill’s advance to Springfield. Marmaduke mistakenly thought that he was between two Federal forces and feared being cut off from his retreat route to Arkansas.

Both sides were determined to seize Hartville: Merrill to secure his retreat route and Marmaduke to replenish his supplies. Each column raced to Hartville, where Merrill’s forces established a defense line. Here, a four-hour battle ensued in which the Confederates suffered heavy casualties but compelled the Union forces to retreat. Although they gained control of Hartville, the Confederates were forced to abandon the raid and return to friendly territory.

After meeting on the Springfield road and exchanging shots, Confederate commander Brig. Gen. John S. Marmaduke and Union commander Col. Samuel Merrill retreated to Hartville. Both were determined to seize the town. Marmaduke thought he was trapped between two enemy forces, and Merrill needed to secure his retreat route and gain higher ground.

The Race to Hartville

About 11 a.m., Shelby’s brigade dismounted and the Confederate artillery began firing. With little knowledge of the Union position, Ben F. Gordon’s, Charles Gilkey’s, and G.W. Thompson’s cavalry regiments moved west past the courthouse. As they reached a rail fence surrounding the square, Union cannon and rifle fire erupted. Stunned, Shelby’s men regrouped and launched a series of dismounted and mounted charges. Union infantry and artillery cut down the attackers. The gunners shelled the courthouse and dueled with Collins’ battery. Marmaduke and Shelby had horses shot from under them. Separated from his cavalry but charging with a group of stragglers, Col. MacDonald died after being shot from his saddle near the courthouse.

Despite Confederate casualties, word came in the early afternoon that the Union troops were retreating. Running short on ammunition, Merrill decided to retreat along the Lebanon road. Shelby pulled back and Marmaduke ordered Porter to hurry Merrill’s troops along. Porter’s men advanced with two artillery in front, but came under fire only 50 yards from the courthouse. In the chaos, Merrill’s orders never reached Lt. Col. Cornelius W. Dunlap and the 21st Iowa. Alone but determined to hold his position until nightfall, Dunlap extended his thin line in the brush and ordered rapid fire. The rifle fire drove Porter’s men back without their artillery, but they regained it later. Porter’s brigade lost an additional officer and Porter was seriously wounded.

The larger Confederate forces had the advantage. However, Marmaduke was concerned about other Federal forces nearby and broke off the engagement. Leaving his wounded in temporary hospitals under care of surgeons, he withdrew from Hartville after dark and marched in a severe winter storm toward winter quarters near Batesville, Arkansas.

Dunlap and his men watched the Confederates leave; they caught up the next morning with Merrill’s command retreating to Lebanon. The Union losses totaled seven dead and 64 wounded. Since Dunlap’s detachment was the last to withdraw from the battlefield, the Union claimed victory at Hartville. Although Waldschmidt’s artillery was key to the defense, Dunlap became the northern hero.

Given the size of the Confederate force, the number of casualties was not severe, a little over 4 percent of the attacking force. However the loss of more than 15 experienced officers devastated the Confederate army in the west. The total losses were 113 killed, wounded or missing. This included two colonels, one lieutenant colonel, one major, eight captains and a lieutenant. Additionally, 11 captains and three lieutenants sustained wounds. Among the dead was the gallant Col. MacDonald who had vowed not to cut his hair until the South prevailed. Col. John Wimer, a former mayor of St. Louis, was also killed. Both were favorites of St. Louis Confederates. Joseph Porter, who had raised hundreds of recruits in north Missouri, died later of his wounds.

Topics. This historical marker is listed in this topic list: War, US Civil. A significant historical date for this entry is January 11, 1863.

Location. 37° 14.92′ N, 92° 30.612′ W. Marker is in Hartville, Missouri, in Wright County. Marker can be reached from S. Main Avenue (State Highway 5) 0.1 miles south of Marshfield Street, on the right when traveling south. Touch for map. Marker is in this post office area: Hartville MO 65667, United States of America. Touch for directions.

Other nearby markers. At least 8 other markers are within 11 miles of this marker, measured as the crow flies. Battle of Hartville Confederate Monument (within shouting distance of this marker); Wright County (about 700 feet away, measured in a direct line); Wright County "Lest We Forget" Memorial (about 700 feet away); Veterans Memorial (approx. 10.2 miles away); Laura Ingalls Wilder (approx. 10.6 miles away); War Memorial (approx. 10.6 miles away); Carl "Sub" Mays (approx. 10.6 miles away); The Wilder Home / The Little House Books Began Here (approx. 10.7 miles away). Touch for a list and map of all markers in Hartville.
Credits. This page was last revised on April 22, 2020. It was originally submitted on November 3, 2016, by Duane Hall of Abilene, Texas. This page has been viewed 1,121 times since then and 71 times this year. Photos:   1, 2, 3, 4, 5. submitted on November 3, 2016, by Duane Hall of Abilene, Texas.
Share this page.