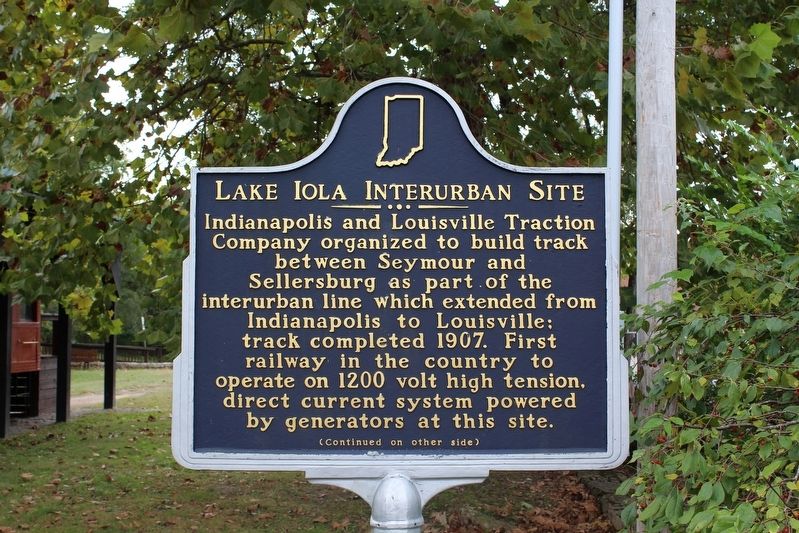 Indianapolis and Louisville Traction Company organized to build track between Seymour and Sellersburg as part of the interurban line which extended from Indianapolis to Louisville; track completed in 1907. First railway in the country to operate on 1200 volt high tension, direct current system powered by generators at this site.

Topics. This historical marker is listed in these topic lists: Railroads & Streetcars • Waterways & Vessels. A significant historical year for this entry is 1907. 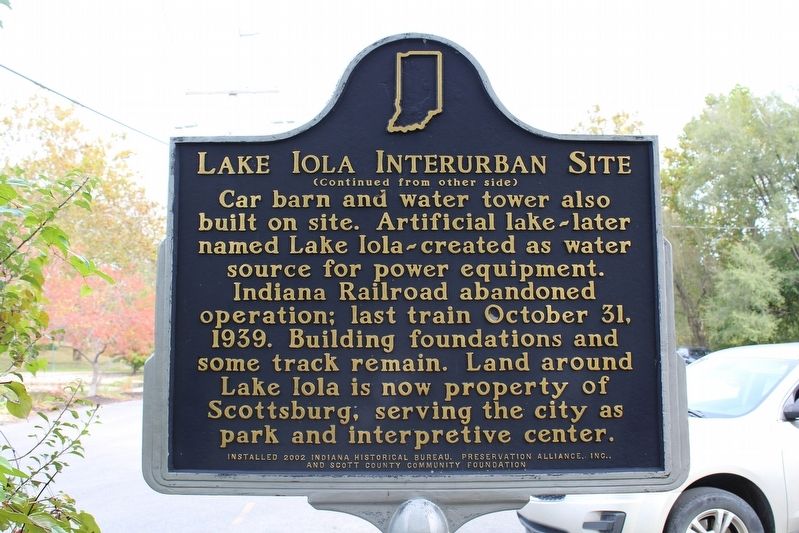 Click or scan to see
this page online
. Marker is on Bond Street, on the right when traveling north. Marker located in William H. Graham Park. Touch for map. Marker is in this post office area: Scottsburg IN 47170, United States of America. Touch for directions. 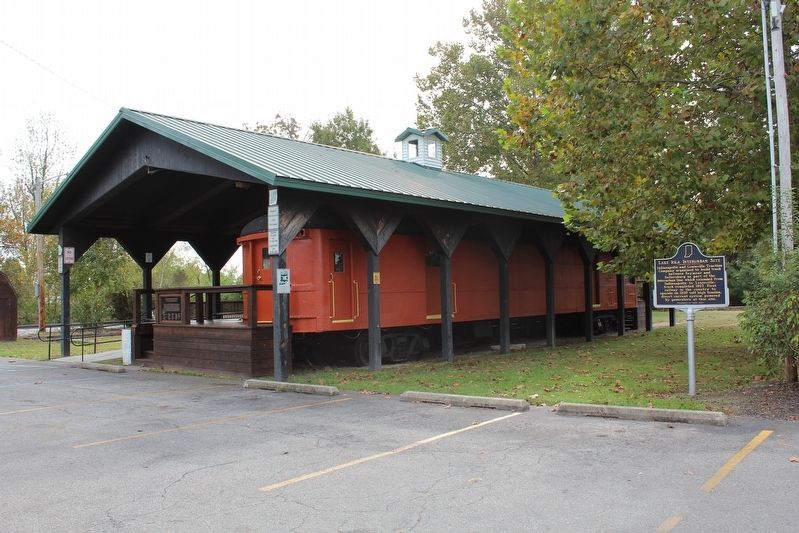 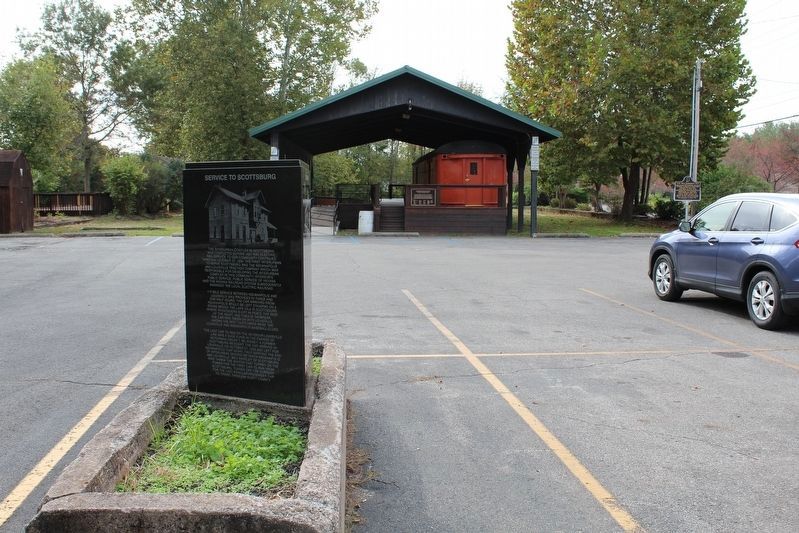 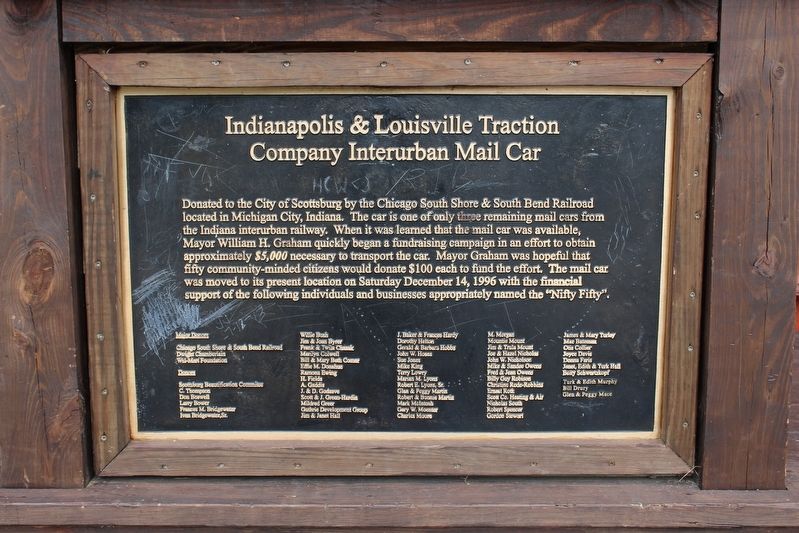 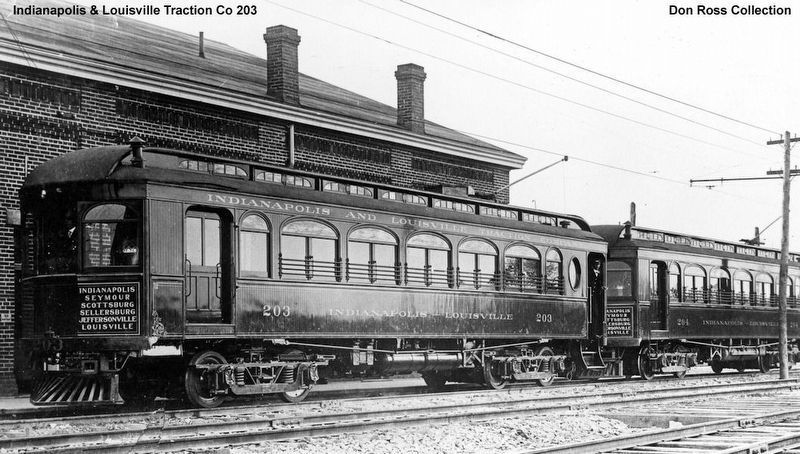 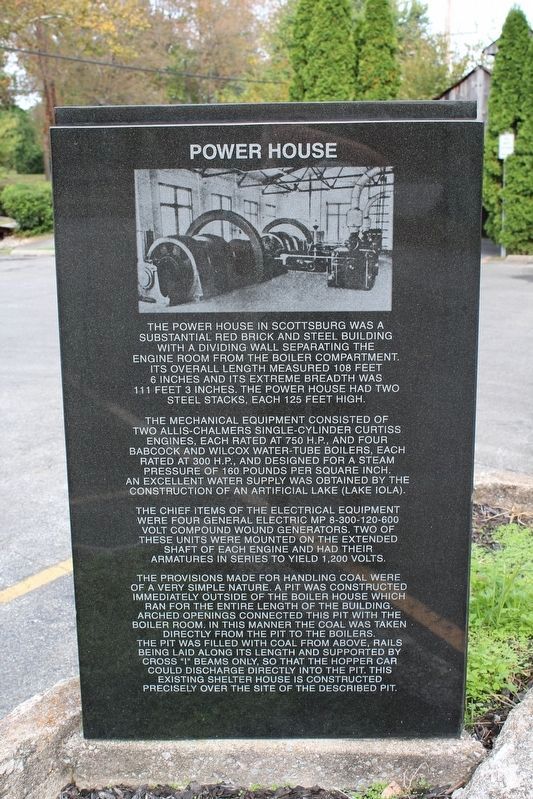 Photographed By Tom Bosse, October 14, 2016
7. Power House
The Power House in Scottsburg was a substantial red brick and steel building with a dividing wall separating the engine room from the boiler compartment. Its overall length measured 108 feet 6 inches and its extreme breadth was 111 feet 3 inches. The power house had two steel stacks, each 125 feet high. The mechanical equipment consisted of two Allis-Chalmers single-cylinder Curtiss engines, each rated at 750 H.P., and four Babcock and Wilcox water-tube boilers, each rated at 300 H.P., and designed for a steam pressure of 160 pounds per square inch. An excellent water supply was obtained by the construction of an artificial lake (Lake Iola). The chief items of the electrical equiopment were four General Electric MP 8-300-120-600 volt compound wound generators. Two of these units were mounted on the extended shaft of each engine and had their armatures in series to yield 1,200 volts. The provisions made for handling coal were of a very simple nature. A pit was constructed immediately outside of the boiler house which ran for the entire length of the building. Arched openings connected this pit with the boiler room. In this manner the coal was taken directly from the pit to the boilers. The pit was filled with coal from above, rails being laid along its length and supported by cross "I" beams only, so that the hopper car could discharge directly into the pit. This existing shelter house is constructed precisely over the site of the described pit. 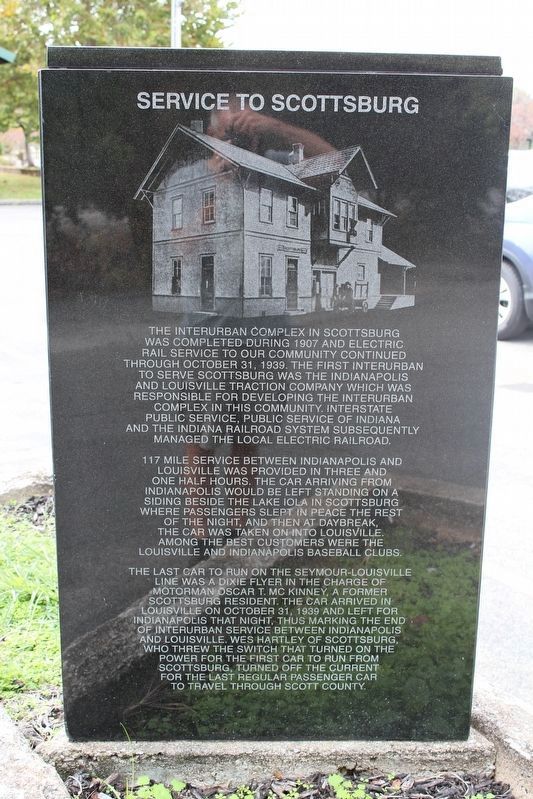 Photographed By Tom Bosse, October 14, 2016
8. Service to Scottsburg
The interurban complex in Scottsburg was completed during 1907 and electric rail service to our community continued through October 31, 1939. The first interurban to serve Scottsburg was the Indianapolis and Louisville Traction Company which was responsible for developing the interurban complex in this community. Interstate Public Service, Public Service of Indiana and the Indiana Railroad System subsequently managed the local electric railroad. 117 mile service between Indianapolis and Louisville was provided in three and one half hours. The car arriving from Indianapolis would be left standing on a siding beside the Lake Iola in Scottsburg where passengers slept in peace the rest of the night, and then at daybreak, the car was taken on into Louisville. Among the best customers were the Louisville and Indianapolis baseball clubs. The last car to tun on the Seymour-Louisville line was a dixie flyer in the charge of Motorman Oscar T. McKinney, a former Scottsburg resident. The car arrived in Louisville on October 31, 1939 and left for Indianapolis that night, thus marking the end of interurban service between Indianapolis and Louisville. Wes Hartley of Scottsburg, who threw the switch that turned on the power for the first car to run from Scottsburg, turned off the current for the last regular passenger car to travel through Scott County. 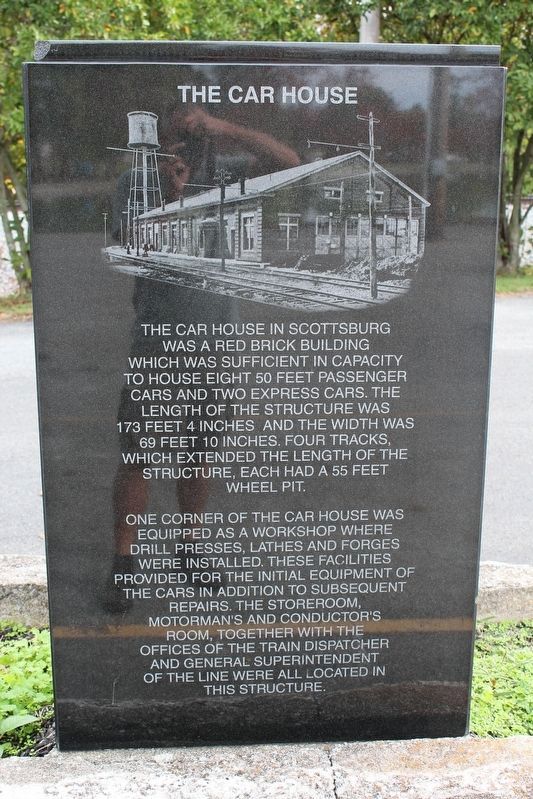