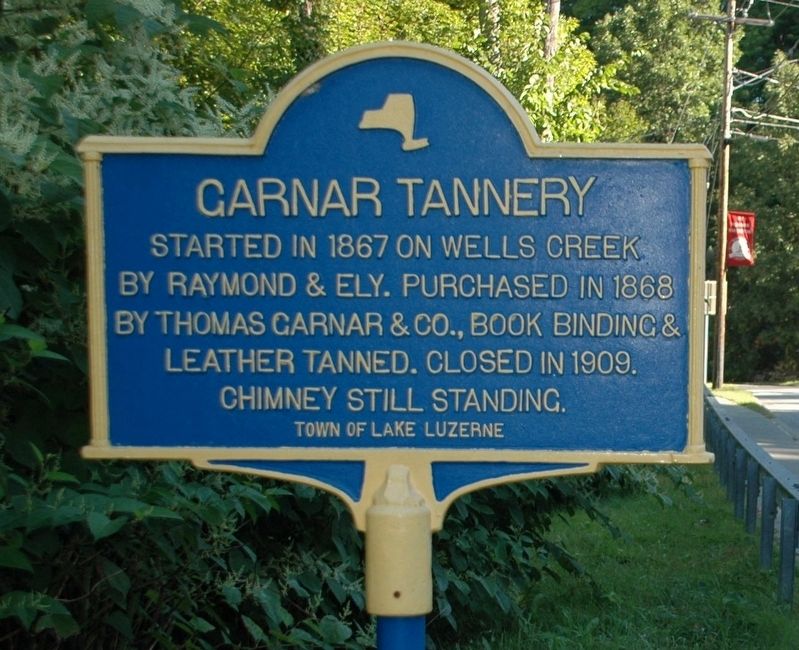 
Erected by Town Of Lake Luzerne.

Topics. This historical marker is listed in this topic list: Industry & Commerce. A significant historical year for this entry is 1867. 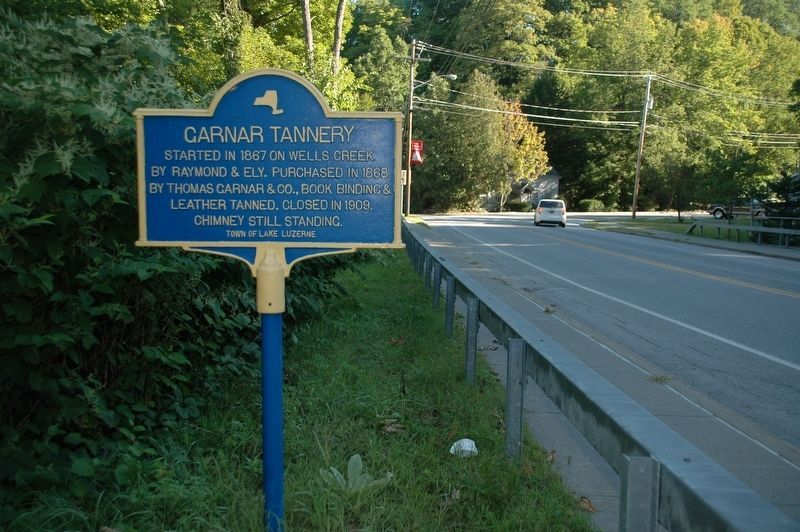 Click or scan to see
this page online
Leather tanning was Luzerne's biggest business during the last half of the nineteenth century. A tannery had been in operation here for some years before the railroad initially reached the area. In 1868 the firm of Thomas Garner, whose offices were in New York City, purchased the Raymond & Ely tannery which had been established in 1867, and immediately an era of expansion began. Thomas Garner conducted the business without a partner until 1879, when he associated himself with J. V. Walsh and his brother Edward M. Garnar, and changed the firm name to Thomas Garnar & Co. Thomas' brother, Edward, came to Luzerne to manage the business. Buildings were put up on both sides of Main Street near Mill Street. The Garnar Company moved in at an opportune time, for the railroad had been put through from Saratoga Springs in 1865, and the ease of heavy shipment by rail instead of by wagon was advantageous to the business. Fifty to seventy-five men were employed and in 1887 the Garnar Company bought the Bowman tannery in Stony Creek, where another twenty-five to thirty men worked. E. M. Garnar Jr. managed the Stony Creek tannery and later, when his father retired from the firm, managed the plants in both towns. Success, however, would seem to be their undoing. Tanneries of the time used bark, and only the bark, of hemlock trees, for tannic acid as a part of the chemical process to turn the hides 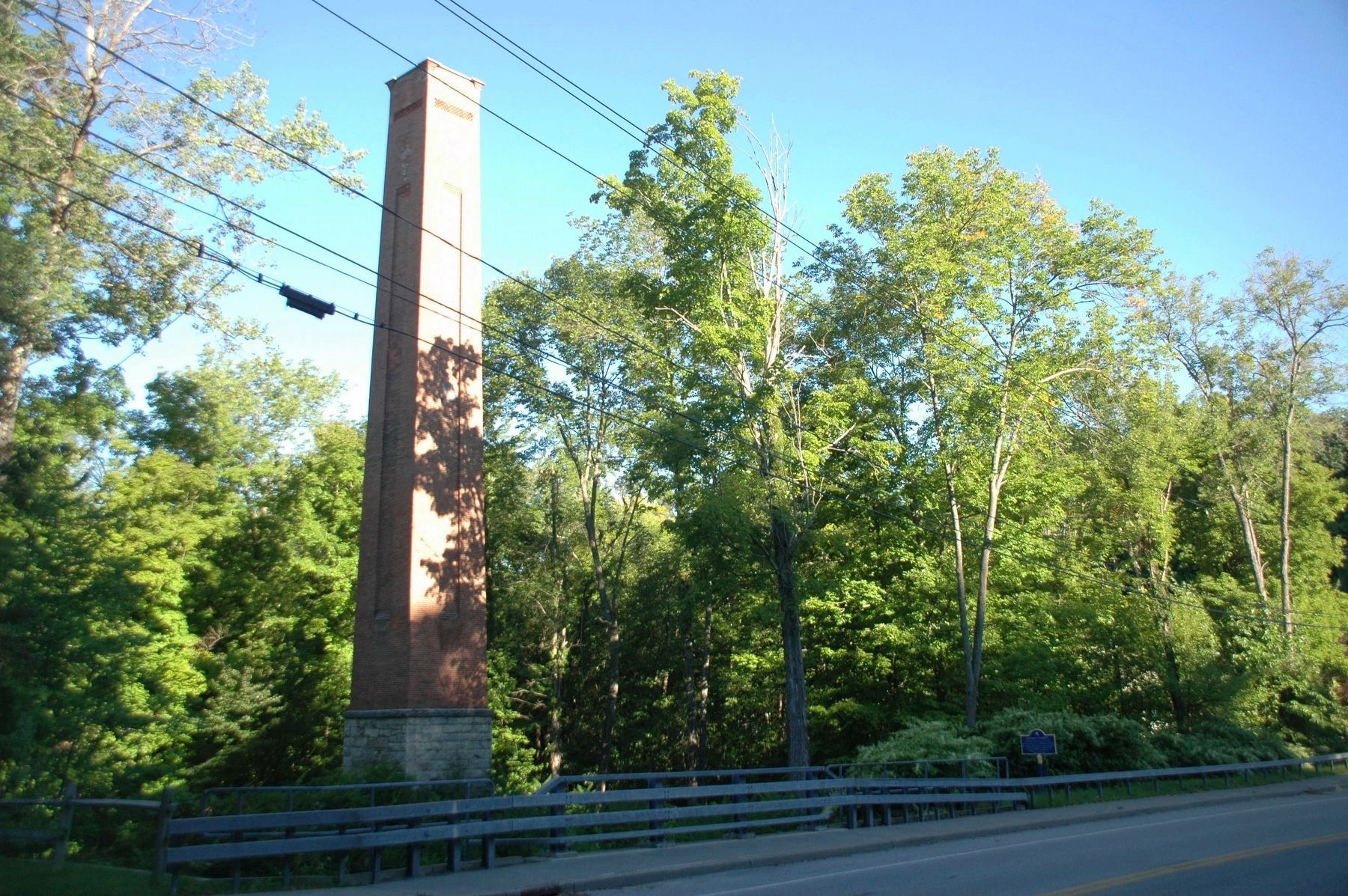 Photographed By Howard C. Ohlhous, September 2, 2016
3. Garnar Tannery Marker
This 100 foot-high smoke-stack is all that remains as a monument to the once thriving tannery business of Thomas Garnar & Co.
of cows and other animals into various kinds of leather. In the days before restoration programs, Garnar's success partially assured failure. One tannery, owned by Henry Poor & Son, reported using 4,500 cords of hemlock per year and consumed about 12,000 animal hides, with a work force of only 40. The other tanneries were of comparable size. The Garnar Company's business reached its peak in 1885 and then, after a time, it declined until 1905, when the tannery closed. The buildings were torn down in 1922-23, and all that remains as a monument to a once thriving business is the 100 foot-high brick smoke­stack.

An advertisement for the firm of Thomas Garnar & Co. appears in the May 22nd, 1879 Shoe and Leather Reporter, a leather and tanning business journal, as well as the following statement about the business;

- The firm of Thomas Garnar & Co., whose advertisement appears in our columns today, have taken the fine store, No. 181 William [in New York City], three doors south of Spruce Street. The factory of this firm is at Luzern, N.Y., and they get out 2,000 dozen of sumac and bark-tanned skivers, roans, etc., monthly. These goods are finished in all styles and colors for shoe and pocketbook makers' and bookbinders' use. They are sold at the New York store, where they also have Russia leather, chamois, etc., of their own importation. The town of Luzern, 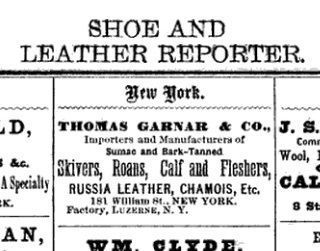 - Shoe and Leather Reporter, May 22nd, 1879, Page 811
NY changed its name to Lake Luzern in 1963. Another ad, appearing elsewhere stated the following; Thomas Garnar & Co., at No. 181 William Street, deal in sumac and bark-tanned skivers; also book, trunk, glove and suspender leather and chamois skins. Mr. Garnar's factory is at Luzern, Warren Co., New York, and has a capacity for 1,000 dozen skins a month. Established in 1857 in New York City. On May 1st the firm changed to its present style, J.V.Walsh and E.M. Garnar, Jr., being admitted. The last named gentleman has charge of the factory at Luzern.