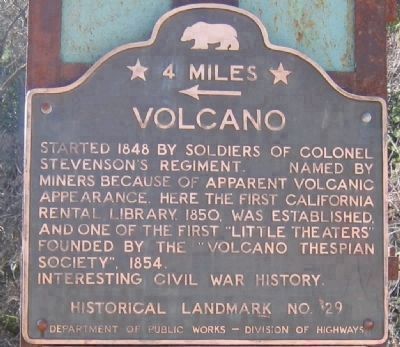 [Larger Marker]:
Started 1848 by soldiers of Colonel Stevenson’s Regiment. Named by miners because of apparent volcanic appearance. Here the first California rental library, 1850, was established. And one of the first “Little Theaters” founded by the “Volcano Thespian Society”, 1854.
Interesting Civil War History.

By Syd Whittle, January 23, 2006
2. Smaller marker under the main marker
. In addition, it is included in the California Historical Landmark, and the E Clampus Vitus series lists.

Location. 38° 26.556′ N, 120° 37.882′ W. Marker is in Volcano, California, in Amador County. Marker is at the intersection of Main Street and Consolation Street, on the right when traveling north on Main Street. Touch for map. Marker is in this post office area: Volcano CA 95689, United States of America. Touch for directions.

Regarding Volcano.
California Historical Landmark description: The spot was discovered in 1848 by Colonel Stevenson's men, who mined Soldiers Gulch in 1849. By 1853 the flats and gulches swarmed with men who named them picturesquely. Hydraulic operations, begun in 1855, 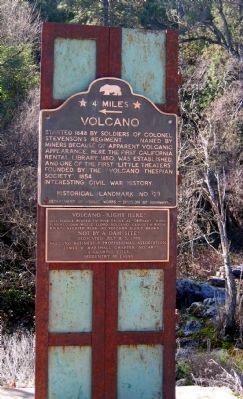 By Syd Whittle, January 23, 2006
3. Volcano Marker
brought thousands of fortune seekers to form a town of 17 hotels, a library, a theater, and courts of quick justice. During the Civil War, Volcano's gold served the Union - Volcano Blues smuggled the cannon 'Old Abe' in by hearse to quell rebels.

Have heard at one time there were scenes of Tahiti painted on the Fire Truck.
Joy Mau, Tahiti
— Submitted September 22, 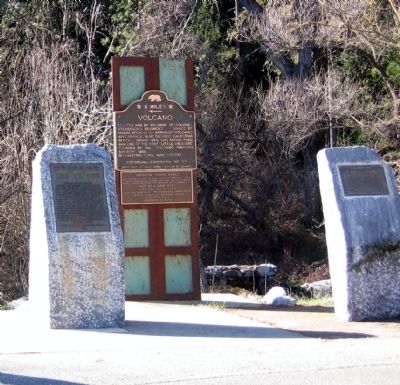 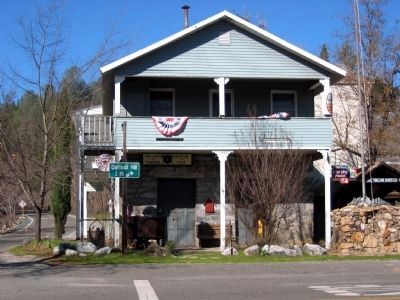 By Syd Whittle, January 23, 2006
5. Town Building - Adams Express Company
Built in 1854, first served as the Johnson and Ross Volcano News Depot, and then became the Adams Express building in 1856. After that it was the D.S. Boydston Drug Store. From 1871 to 1905, Sing Kee and his wife sold herbs, opium, and general merchandise there. 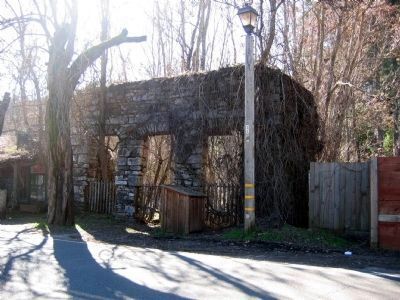 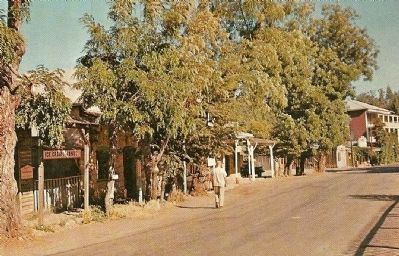 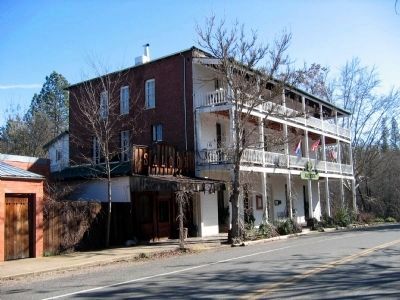 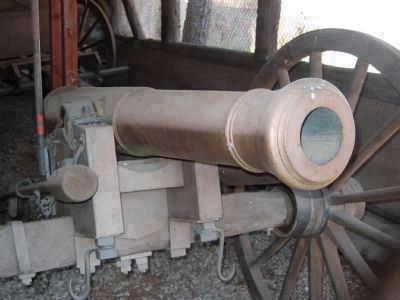 By Syd Whittle, January 23, 2006
9. "Old Abe"
Sign on building that houses "Old Abe" reads:
Union Square: Named to commemorate an event during Civil War days when the Unionist "Volcano Blues" confronted the Confederate "Knights of the Golden Circle" on this spot. With the help of the cannon, "Old Abe" the "Blues" effected a decisive victory over the "Knights."
P.S. The story goes that the enthusiastic "Blues" had overcharged the weapon. It would have exploded had it actually been fired. 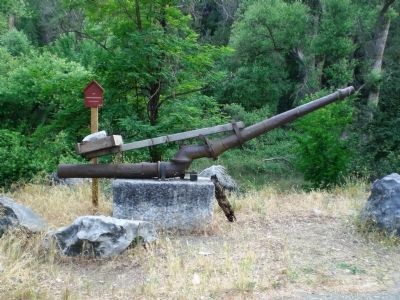 June 28, 2008
10. Hydraulic Mining Monitor (Nozzle), circa 1854
This (assuming the date is correct on the accompanying plaque) is a very early example of a hydraulic mining monitor, used in the Elephant hydraulic mine, about one mile north of Volcano. The monitor was used to direct a stream of water under very high pressure to literally dissolve the earth to wash out gold bearing ores. The monitor now stands about 100 feet to the north of the Volcano historical marker. 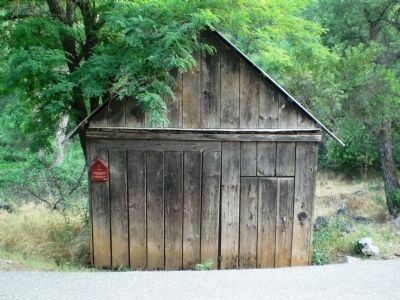 June 28, 2008
11. Volcano - Old Jail , circa 1871
Constructed of iron boilerplate between wood inner and outer walls. Local legend has it that the first two inmates were the men who built it. The jail is located approximately 200 feet north of the Volcano historical marker. 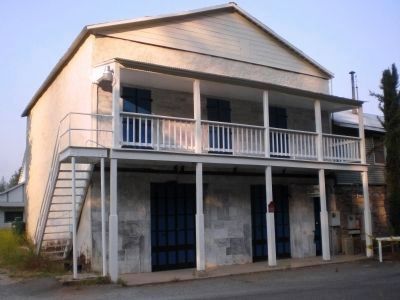 June 28, 2008
12. Volcano - Masonic Lodge, circa 1854
Originally was the office of the Volcano Weekly Ledger. In 1860 the building became jointly owned by the Oddfellows and the Masons. The building is located some 200 feet north of the Volcano historical marker (opposite the old jail) and is still used as a Masonic Lodge. 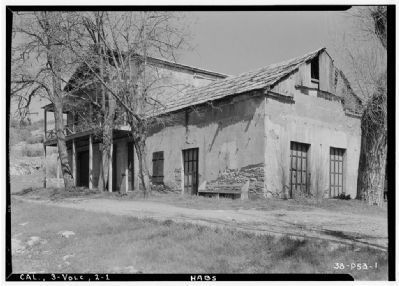 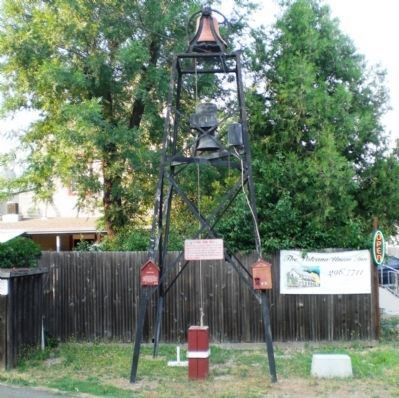 June 28, 2008
14. Starr King Bell, ca. 1863
According to the accompanying plaque, "The bell was donated to Volcano by Unitarian preacher Thomas Starr King, who was grateful to the town for its support of the Union and the election of Abraham Lincoln. The bell was originally located at the Methodist Cemetery. The bell is Vickers cast steel and was manufactured in Sheffield, England". The bell is located roughly 400 feet east of the Volcano historical marker. 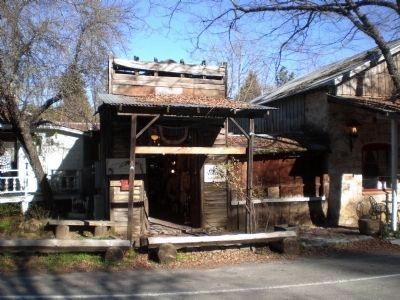 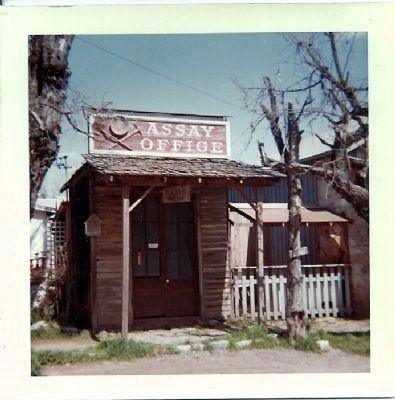 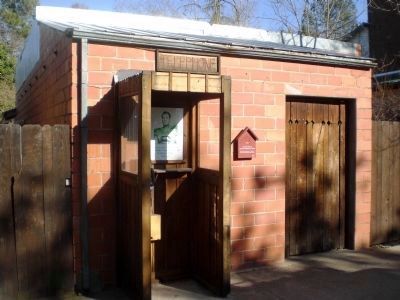 January 31, 2009
17. Volcano - Post Office and Telephone Exchange
Constructed in the 1930's of terra cotta tile and in operation until the 1960's, when it became a private residence. The sharp-eyed observer will note a Superman poster within the phone booth, reading "Please do not vandalize this phone booth. I have no place else to change clothes. - Superman" Building is located on Main Street, just to the north of the Whiskey Flat Saloon. 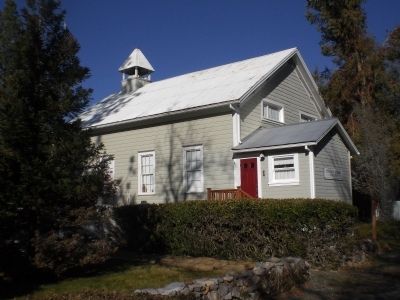 January 31, 2009
18. Volcano Schoolhouse
In use for over a century, from 1855-1956. Now a private residence. Located at the corner of Plug Street and National Street, about a five minute walk from the Volcano Marker. The bell tower was not part of the original structure, but was added later. 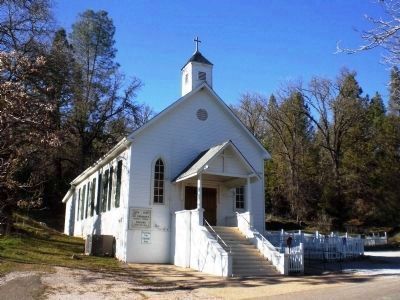 January 31, 2009
19. St. Bernard's Catholic Church (at the intersection of Plug Street and Emigrant Road)
Built in 1908 to replace St. Bridget's Church, which was located at the Volcano Catholic Cemetery. St. Bridget's was destroyed by fire in 1868. 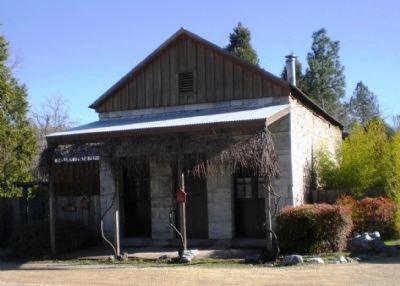 January 31, 2009
20. Volcano - Bavarian Brewery
Constructed in 1856. Last of the 3 breweries in Volcano. Operated by the Jacob Stolken family and later by Peter Seible. Now a private residence. Located on Consolation Street, less than 200 feet from the Volcano marker. 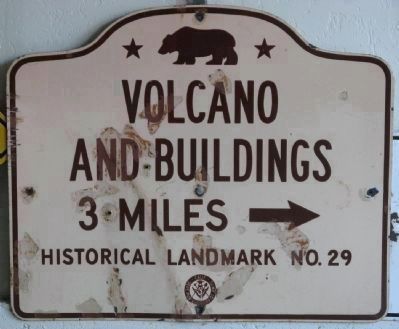