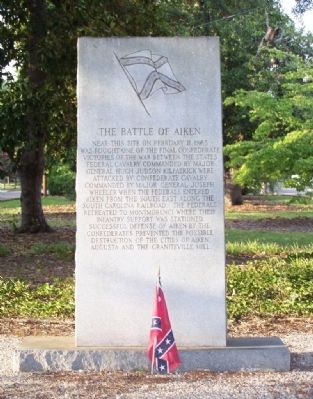 By Mike Stroud, July 2008
1. Battle Of Aiken Marker
Inscription.
Battle of Aiken. . , Near this spot on February 11, 1865 was fought one of the final Confederate victories of the War Between The States. Federal Cavalry commanded by Major General Hugh Judson Kirkpatrick were attacked by Confederate Cavalry commanded by Major General Joseph Wheeler when the Federals entered Aiken from the south east along the South Carolina Railroad. The Federals retreated to Montmorenci where their infantry support was stationed. Successful defense of Aiken by the Confederates prevented the possible destruction of the cities of Aiken, Augusta and the Graniteville Mill. . This historical marker was erected in 1960 by Aiken County Historical Commission. It is in Aiken in Aiken County South Carolina

Near this spot on February 11, 1865 was fought one of the final Confederate victories of the War Between The States. Federal Cavalry commanded by Major General Hugh Judson Kirkpatrick were attacked by Confederate Cavalry commanded by Major General Joseph Wheeler when the Federals entered Aiken from the south east along the South Carolina Railroad. The Federals retreated to Montmorenci where their infantry support was stationed. Successful defense of Aiken by the Confederates prevented the possible destruction of the cities of Aiken, Augusta and the Graniteville Mill.

Topics. This historical marker is listed in this topic list: War, US Civil. A significant historical month for this entry is February 1805. 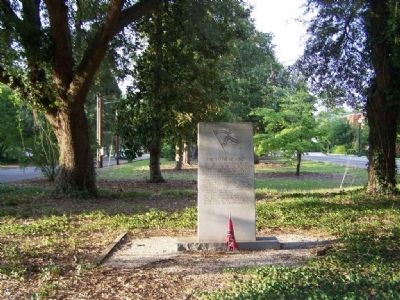 Also see . . .
1. Joseph Wheeler. In late 1864 Wheeler's cavalry was virtually the only effective Confederates to oppose Sherman's March to the Sea throughout the rest of the year. (Submitted on August 8, 2008, by Mike Stroud of Bluffton, South Carolina.)

3. History of the Battle of Aiken 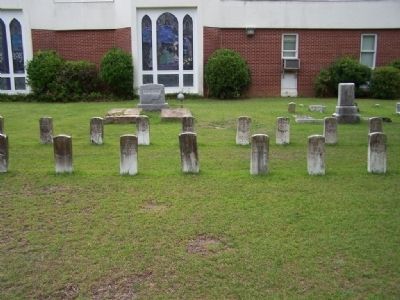 By Mike Stroud, 2008
3. Battle Of Aiken Union graves approx, 50 feet from Marker, at First Baptist Church
. William Tecumseh Sherman, resting his troops in Savannah, declared, “When I go through South Carolina, it will be one of the most horrible things in the history of the world. The devil himself couldn’t restrain my men in that state.” (Submitted on August 30, 2008, by Brian Scott of Anderson, South Carolina.) 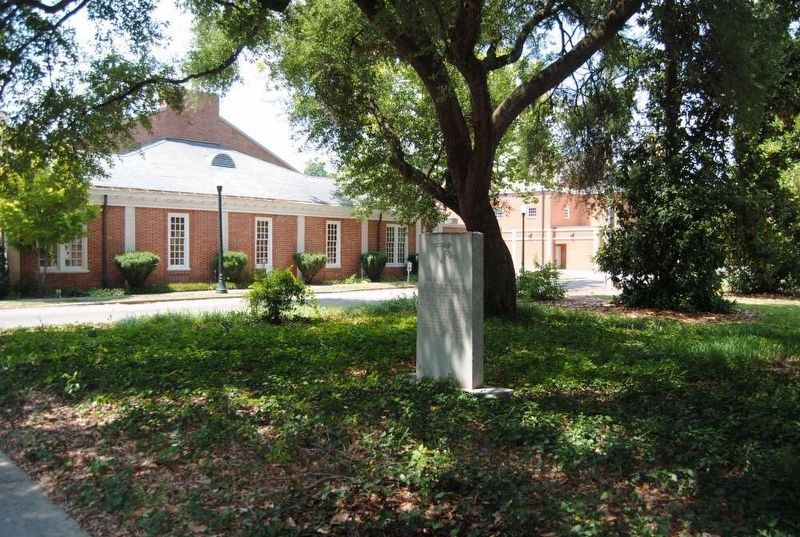 By Brian Scott, August 2, 2015
4. Battle of Aiken Monument
for this six-foot granite marker was held on Saturday, February 13, 1960. Rain drove the crowd of 200 inside nearby St. John's Methodist Church. John H. Staubes, Sr., chairman of the Aiken County Historical Commission, was master of ceremonies. Mayor Odell weeks welcomed the visitors to the city. Rep. Robby Bell of Lancaster responded for the visitors. Rep. John May of Aiken introduced the speaker, William D. Workman, Jr., historian and author of The Case for the South...This was believed to be the first Centennial celebration of the Confederacy in the South. (Source: A Guide to Confederate Monuments in South Carolina: "Passing the Silent Cup" by Robert S. Seigler, 1997, pg. 48.)
— Submitted February 28, 2009, by Brian Scott of Anderson, South Carolina.
3. The Battle of Aiken
Aiken was the scene of a street battle on February 11, 1865. Union Major General Judson Kilpatrick's cavalry was surprised on both flanks by Confederate Major General Joe Wheeler's cavalry. Kilpatrick had been warned repeatedly that Wheeler's men were in the area possibly trying to set up a trip, but the man known as "Kit-Calvary" for his hard driving of men and horses could not have cared less. Dozens of Kilpatrick's men were cut down by Confederate pistols. Those who could still breathe 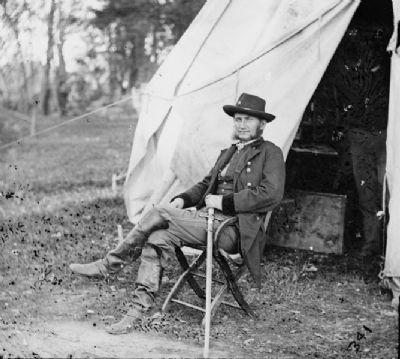 Kilpatrick led the scramble out of town, with several Confederates riding amongst the Federals in an attempt to pull the general off his horse and take him prisoner. If there was one thing Kilpatrick always did well, it was ride his horse away from Confederates. He escaped. More than ninety Federals were taken prisoner. Kilpatrick's hat was also captured. (Source: Touring the Carolina's Civil War Sites by Clint Johnson, pg 365.)
— Submitted March 14, 2009, by Brian Scott of Anderson, South Carolina.
4. Joseph Wheeler (1836 - 1906)
Joseph, a Representative from Alabama; born in Augusta, Ga., September 10, 1836; attended local schools and the Episcopal Academy, Cheshire, Conn.; was graduated from the United States Military Academy at West Point, 1859; attended the Cavalry School at Carlisle, Pa., 1859-1860; transferred to the Mounted Rifles June 26, 1860; second lieutenant September 1, 1860, and served in New Mexico; resigned from the United States Army February 27, 1861; appointed lieutenant of Artillery in the Confederate Army on April 3, 1861; successively promoted to the grade of colonel, brigadier general, and major general, and was commissioned lieutenant general in February 1865; in 1862 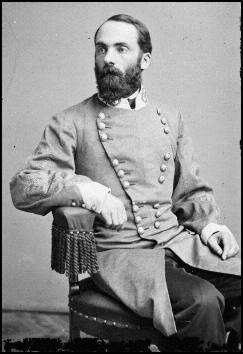 By Unknown Source, circa 1863
6. Maj. Gen. Joseph Wheeler (C.S.A.)
1836–1906
U.S. House of Rep from Ala. 1880-1900
was assigned to the command of the Army Corps of Cavalry of the Western Army, continuing in that position until the war closed; senior Cavalry general of the Confederate Armies May 11, 1864; studied law; was admitted to the bar and engaged in practice at Wheeler, Ala., and also became a planter; presented credentials as a Democratic Member-elect to the Forty-seventh Congress and served from March 4, 1881, to June 3, 1882, when he was succeeded by William M. Lowe, who contested his election; subsequently elected to the same Congress to fill the vacancy caused by the death of William M. Lowe and served from January 15 to March 3, 1883; elected as a Democrat to the Forty-ninth and to the seven succeeding Congresses and served from March 4, 1885, to April 20, 1900, when he resigned; chairman, Committee on Expenditures in the Department of the Treasury (Fiftieth Congress), Committee on Territories (Fifty-third Congress); served in the Spanish-American War; commissioned major general of Volunteers May 4, 1898, and assigned to command of a Cavalry division, United States Army; senior member of the commission which negotiated the surrender of Santiago and the Spanish Army in Cuba; during the Philippine Insurrection commanded the First Brigade, Second Division, Eighth Army Corps, in the Tarlac campaign and in several other operations in central Luzon from July 8, 1899, to January 24, 1900; commissioned brigadier general in the United States Regular Army June 16, 1900; retired September 10, 1900; died in Brooklyn, N.Y., January 25, 1906; interment in Arlington National Cemetery. (Source: Biographical Directory of the U.S. Congress.)
— Submitted January 5, 2011, by Brian Scott of Anderson, South Carolina.
Credits. This page was last revised on March 26, 2017. It was originally submitted on August 8, 2008, by Mike Stroud of Bluffton, South Carolina. This page has been viewed 5,989 times since then and 145 times this year. Photos:   1, 2, 3. submitted on August 8, 2008, by Mike Stroud of Bluffton, South Carolina.   4. submitted on March 26, 2017, by Brian Scott of Anderson, South Carolina.   5, 6. submitted on March 14, 2009, by Brian Scott of Anderson, South Carolina. • Craig Swain was the editor who published this page.
Share This Page.