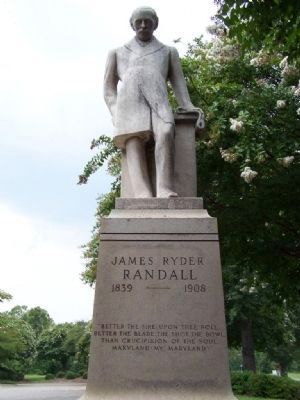 Photographed By Mike Stroud, 2008
1. James Ryder Randall Marker
Inscription.
James Ryder Randall. 1839 — 1908.
"Better the fire upon thee roll, Better the blade, the shot, the bowl, Than Crucifixion of the soul, Maryland! My Maryland!". . This historical marker was erected in 1936 by The Randall Memorial Committee of Chapter "A" United Daughters of the Confederacy Augusta Georgia. It is in Augusta in Richmond County Georgia

"Better the fire upon thee roll,
Better the blade, the shot, the bowl,
Than Crucifixion of the soul,
Maryland! My Maryland!"

Erected 1936 by The Randall Memorial Committee of Chapter "A" United Daughters of the Confederacy Augusta Georgia.

Topics and series. This historical marker is listed in these topic lists: Arts, Letters, Music • Communications • War, US Civil. In addition, it is included in the United Daughters of the Confederacy series list. 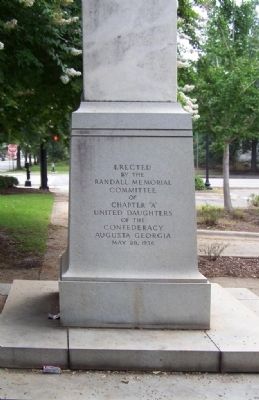 Regarding James Ryder Randall. James Ryder Randall, a 22-year-old Baltimore native teaching English literature at Poydras College in Pointe-Coupee, Louisiana, was outraged at the news of Union troops being marched through his home town. This incident stirred Randall’s Southern sympathies, inspiring him to write a poem said to be American’s "most martial poem." Maryland, My Maryland was first published in the April 26, 1861 edition of the New Orleans Delta.

The poem, the best known of all Randall's poetry, quickly found its way back to Baltimore where it was eventually set to the familiar music of O Tannenbaum [O Christmas Tree]. It became instantly popular and the most famous war song of the Confederacy.

After the war was over in 1865, Randall served several positions with various newspapers. His final post was as an editor and correspondent for the Augusta Chronicle. He died in Augusta, Georgia January 15, 1908. 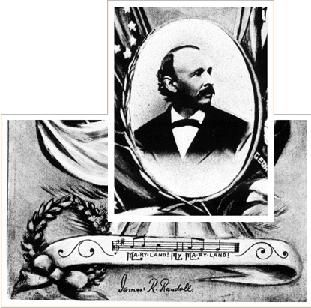 3. Portrait of James Ryder Randall
Detail from postcard, Jack Kelbaugh Collection of Civil War Photographs, MSA SC4325-52, Maryland State Archives
My Maryland has nine stanzas. The passage on this monument is from the eighth stanza. Randall's poem was adopted as the Maryland State song in 1939 (Chapter 451, Acts of 1939; Code State Government Article, sec. 13-307).

Related marker. Click here for another marker that is related to this marker. The use of “Maryland, My Maryland” during the war is discussed on this marker.