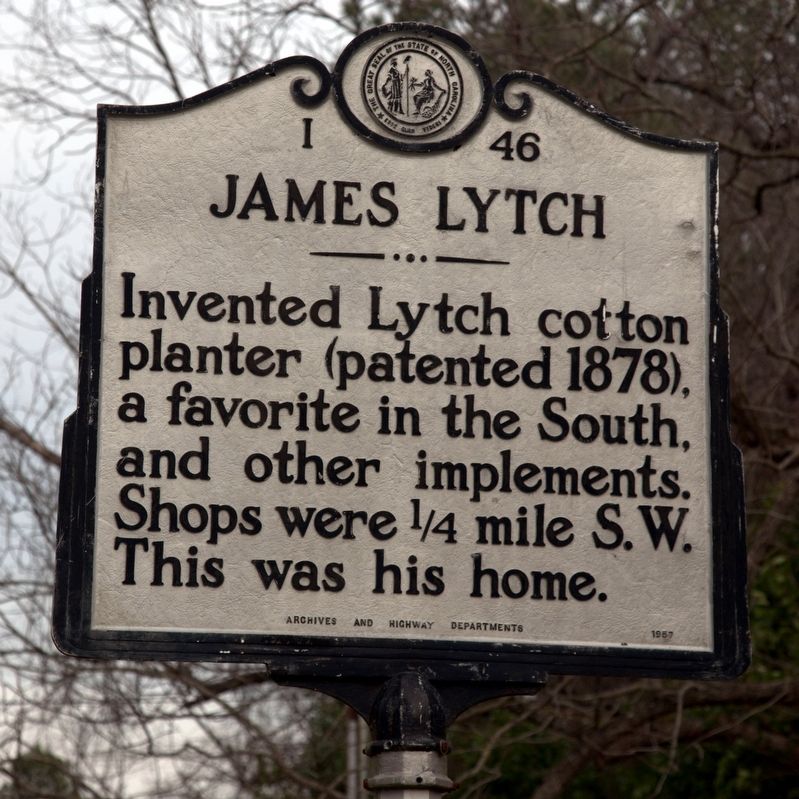 Photographed By J. J. Prats, February 18, 2017
1. James Lytch Marker
Inscription.
James Lytch. . Invented the Lytch cotton planter (patented 1878), a favorite of the South, and other implements. Shops were ¼ mile southwest. This was his home. . This historical marker was erected in 1957 by Archives and Highway Department. It is Near Laurinburg in Scotland County North Carolina

Invented the Lytch cotton planter (patented 1878), a favorite of the South, and other implements. Shops were ¼ mile southwest. This was his home.

Erected 1957 by Archives and Highway Department. (Marker Number I-46.)

Topics and series. This historical marker is listed in these topic lists: Agriculture • Industry & Commerce. In addition, it is included in the North Carolina Division of Archives and History series list. A significant historical year for this entry is 1878.

Location. 34° 44.877′ N, 79° 31.406′ W. Marker is near Laurinburg, North Carolina, in Scotland County. Marker is at the intersection of X-Way Road (Road 1108) and Blue Woods Road (Road 1116), on the right on X-Way Road. A signpost at the marker lists Gibson as five miles southwest and Laurinburg at three miles northeast. Touch for map. Marker is in this post office area: Laurinburg NC 28352, United States of America. Touch for directions. 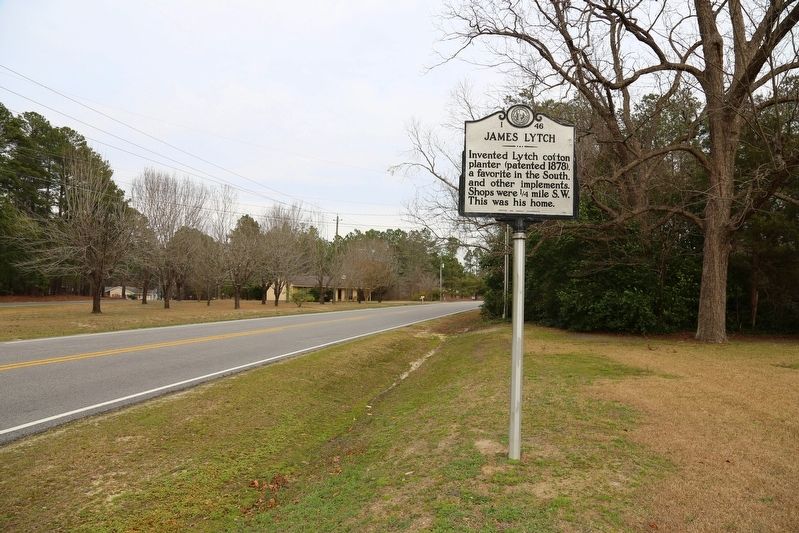 Also see . . .  NCpedia entry for James Lytch. “Lytch was raised and educated in the tradition of his Scottish Presbyterian family, but his mechanical ingenuity appears to have been a natural gift. His first patent was issued in 1870 for a cotton planter, which he called the Eclipse Lytch Cotton Planter. It was his most successful invention and was widely used throughout the South; some planters were sold as far away as California. The Cape Fear Agricultural Association awarded Lytch a medal for his planter at its 1872 fair in Wilmington. Other inventions for which Lytch received patents were a cotton scraper (1870), a cider mill (1870), and an improved fertilizer distributor (1873).

“The Lytch planter was manufactured in shops Lytch built near his home at X-Way in Richmond (now Scotland) County. He also built and operated a gristmill at the site. As of 1980 this mill was still in operation,