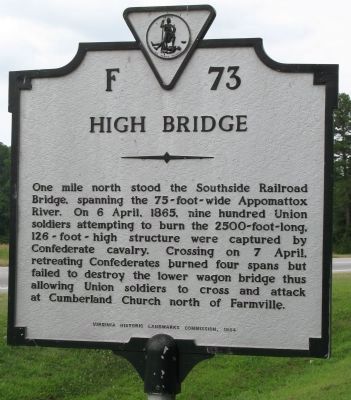 Topics. This historical marker is listed in these topic lists: Railroads & Streetcars • War, US Civil.

Other nearby markers. At least 8 other markers are within 3 miles of this marker, measured as the crow flies. Cavalry Battle at High Bridge (within shouting distance of this marker); a different marker 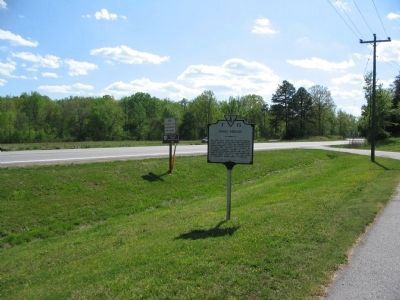 2. High Bridge over the Appomattox River. Wikipedia entry. “Rebuilt after the Civil War to its former dimensions, the 21-span structure was 2,400 feet (730 m) long at a maximum height of 160 feet (49 m) above the Appomattox River Valley. Its owner, Norfolk and Southern, has abandoned the corridor, gifting 33 miles of the line to the Virginia Department of Conservation and Recreation. (Submitted on April 28, 2012.) 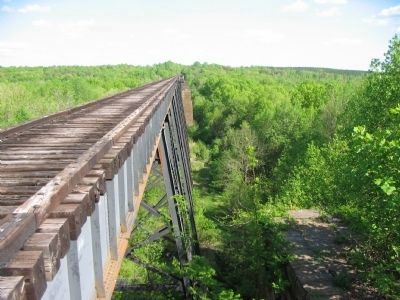 By Craig Swain
3. High Bridge - Before Modifications for Trail Use
Looking from the north bridge abutment across the bridge. The iron bridge dating to the early 20th century stands, and pillars of the wartime bridge, to the right of the trusses, remain.
1. High Bridge has opened to the public.
A foot trail along the High Bridge Trail takes visitors to the bridge which is open to the public. The bridge crosses the Appomattox. The entire High Bridge Trail will eventually 34 miles long and still in development. To see the site of High Bridge from Farmville, head north out of town on Route 45, cross the river then turn east on River Road and continue 3 miles to a parking area. Be prepared for a walk and take some water. The bridge is a mile walk southeast of River Road, but well worth the hike.
— Submitted April 26, 2012, by Bruce RInehart of Virginia Beach, Virginia. 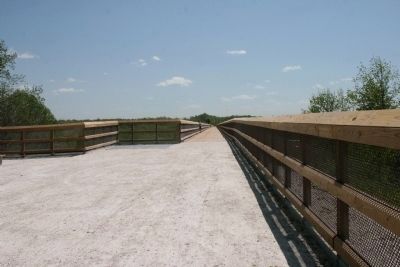