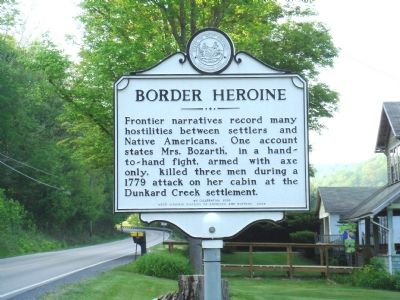 Photographed By J. J. Prats, May 15, 2007
1. Border Heroine Marker
Inscription.
Border Heroine. . Frontier narratives record many hostilities between settlers and Native Americans. One account states Mrs. Bozarth, in a hand-to-hand fight, armed with axe only, killed three men during a 1779 attack on her cabin at the Dunkard Creek settlement. . This historical marker was erected in 2004 by West Virginia Celebration 2000 and the West Virginia Division of Archives and History. It is Near Pentress in Monongalia County West Virginia

Frontier narratives record many hostilities between settlers and Native Americans. One account states Mrs. Bozarth, in a hand-to-hand fight, armed with axe only, killed three men during a 1779 attack on her cabin at the Dunkard Creek settlement.

Topics and series. This historical marker is listed in these topic lists: Native Americans • Settlements & Settlers. In addition, it is included in the West Virginia Archives and History series list. A significant historical year for this entry is 1779.

Other nearby markers. At least 5 other markers are within 2 miles of this marker, measured as the crow flies. Shanks Mill (approx. ¼ mile away); Catawba War Path (approx. 0.7 miles away); 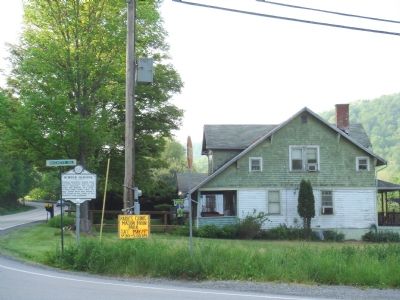 Regarding Border Heroine. “During these bloody wars, also, exploits were performed by females worthy of a record upon the pages of the world’s history. One occurred at Dunkard’s creek, about the same time as the former. Two or three families had fled for safety to the house of a Mr. Bozarth. The Indians came upon it when it contained only Mrs. Bozarth and two other men. Warned by the children, who were playing outside, that the ‘ugly red men’ had come, one of the men ran to the door. He received a shot and fell. The Indian, who had shot him, sprang in after him, and grappling with the other white man was thrown down. Having no weapon, he called upon Mrs. Bozarth for a knife. Not finding a knife, she seized an ax, and with a single blow cleft the head of the savage. At that moment another Indian shot the white man dead. Mrs. Bozarth, by a well-directed blow, leveled the savage with her ax. Others were crowding in behind; the first received a blow on the head. As the others drew back, she succeeded in closing and fastening the door. The two white men, though both severely wounded, aided the heroine in maintaining the defense, 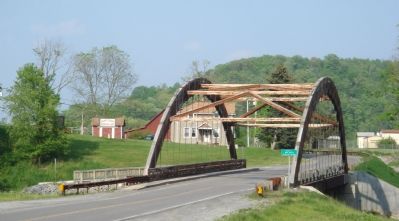 Photographed By J. J. Prats, May 15, 2007
3. Robert C. "Bob" Beach Memorial Bridge
This 2004 wooden arch bridge over Dunkard Creek is on Buckeye Road, in sight of this marker. The buildings in Mason Dixon Park can be seen beyond the bridge.
till a detachment from a neighboring settlement came up for their relief. All the children in the yard were butchered by the incarnate fiends. The whole transaction lasted hardly three minutes; and yet, considering the numbers and circumstances, it was a severe and bloody affair.” —paragraph from the 1857 book Life Among the Indians; or, Personal Reminiscences and Historical Incidents Illustrative of Indian Life and Character by Rev. James B. Finley and edited by Rev. D. W. Clark, D.D.