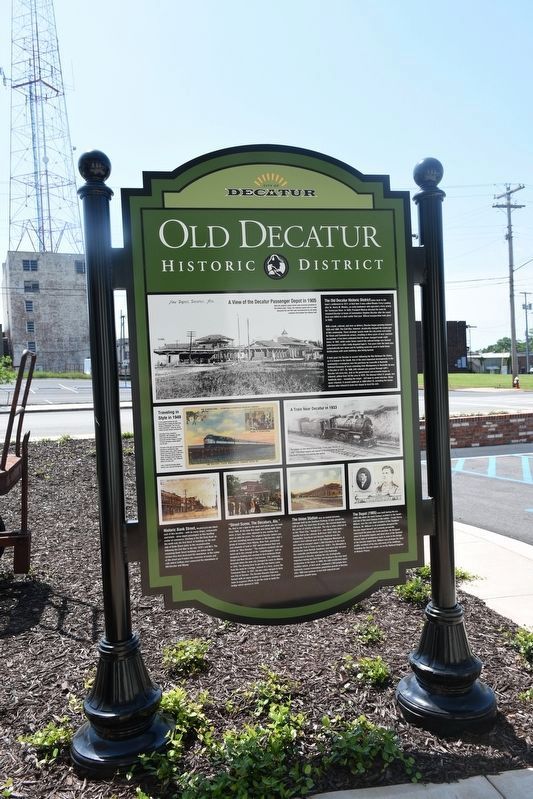 The Old Decatur Historic District dates Back to the town's settlement in 1817; at that time it was called Rhodes Ferry Landing after Dr. Henry W. Rhodes, an early landowner who operated a ferry across the Tennessee River. In 1820, President Monroe directed the town be renamed Decatur in honor of Commodore Stephen Decatur after the naval hero was killed in a duel earlier that year. Official incorporation took place in 1826.

With a bank, railroad, and river as drivers, Decatur began growing between 1830 and 1860. The Civil War, however, drastically changed the landscape of this community. Those strategic assets made the city prime real estate for Union and Confederate armies, resulting in three years of near constant occupation. It has been estimated that the town changed hands eight times. In 1862, while under Union control the railroad bridge was burned (who burned is still a hotly disputed topic)!. Two years later the town was systematically torn down and its building materials used to build Union fortifications with some buildings also being burned.

It took years for Decatur to recover following the War Between 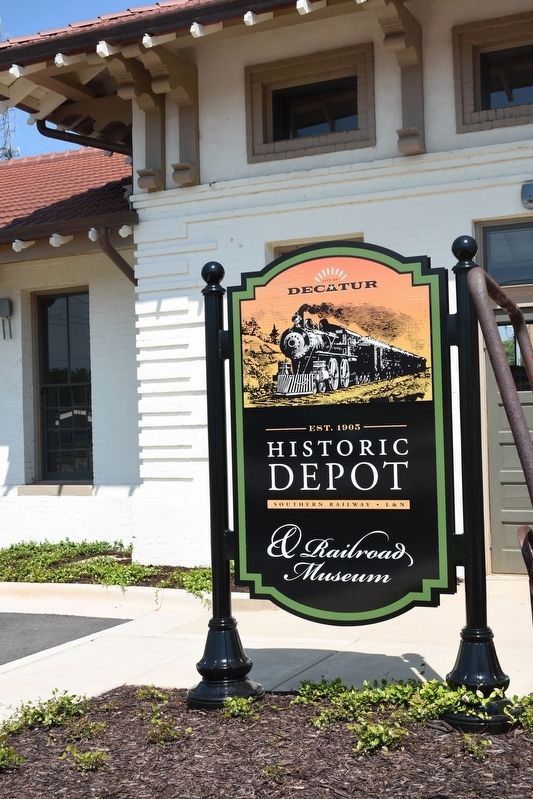 Click or scan to see
this page online
the States, as it is know in the South. One of the most important developments in the community's resurgence was the purchase by Louisville & Nashville Railroad Company of track extending from Montgomery to Nashville by way of Decatur in 1871. By 8886, 640 railroad cars passed through L&N's Decatur rail every day. Just as the government and economy began to rebound, yellow fever hit the area in 1878. The disease killed 51 people, but hundreds more — including the mayor — left town to avoid infection. Mayor never returned. A second outbreak in 1888 killed 35, including five heroic doctors who refused to leave but stayed to treat the sick.

Historic Bank Street, located just on block east of this location — with its many shops, restaurants and hotels-drew depot passenger to this bustling center of commerce. Stating at the Old State Bank on the north end, the first block of buildings on the east side of Bank Street dates to the reconstruction following the Civil War in the late 1870's and 80's. The remaining Bank Street buildings are newer due to various fires that destroyed the downtown. In the center of the street you'll notice the remnants of bricks and rails where trolleys once connected the downtowns of Old Decatur and Albany.

"Street Scene, The Decaturs, Ala." No, that is not a typo on the post card photo you see form circa 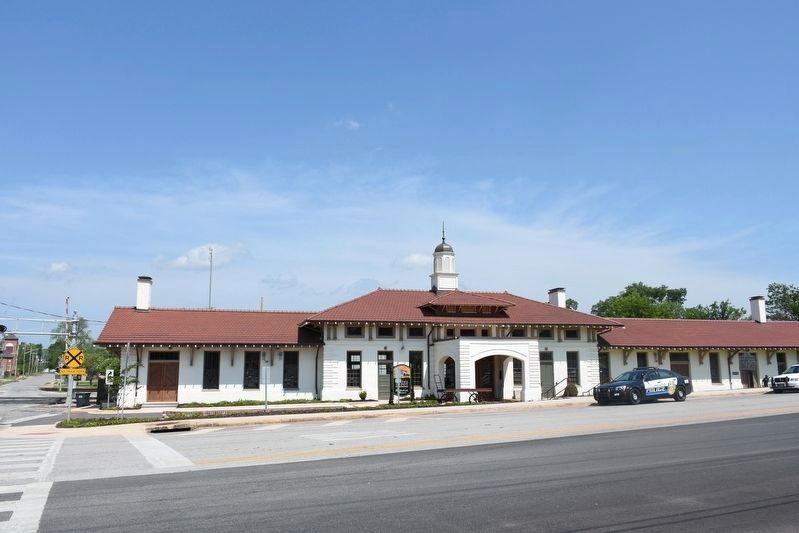 Photographed By Sandra Hughes, April 29, 2017
3. Train Depot
1905. At the time this depot was being built, there were, in fact, two cities adjacent to one another that were at odds for years. The original Decatur (where you are now standing)became known as Old Decatur after a group of investors from Albany, New York, purchased vast amounts of land in 1887 and positioned their real estate as "New Decatur." The southern residents did not warm up to the concept of the "carpetbaggers" and an imaginary dividing line seemed to form between Bank Street and New Decatur's 2nd Avenue. This animosity lessened when the new city changed its name to Albany in 1916. The driving force to join the two towns came from the need for a bridge, instead of a ferry, across the Tennessee River. In 1927, the two cities merged to form one City of Decatur. The Decatur Kiwanis Club was formed with an equal number of member from each town to organize efforts to get the state to build the bridge which opened in 1928.

The Union Station so named because, although built by the Southern Railway, it later served the L&N as well. For more that 50 years, the current depot was the center of activity in Decatur. The city is often referred to as the "River City," though it is — and always had been — equally tied to the railroad. Built from 1832-1834, the Tuscumbia, Courtland and Decatur Railroad was the nation's first railroad west of the Allegheny 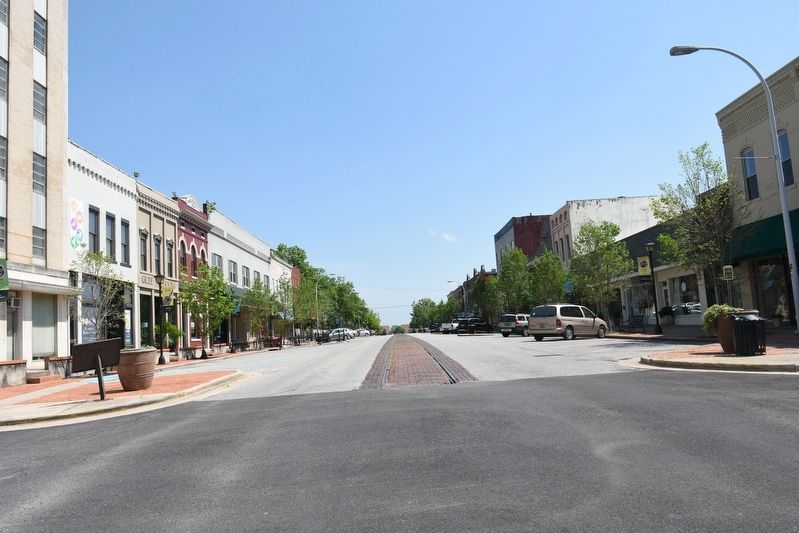 Photographed By Sandra Hughes, April 29, 2017
4. Old Downtown Decatur
Mountains. It was used to transport about 2,300 Cherokees to the west during the Trail of Tears in the late 1830's. The Memphis & Charleston (now Norfolk-Southern) and what later became the Louisville and Nashville (now CSX)Railroads intersected at Decatur, making the city strategically important during the Civil War and leading to the near total destruction of the town. In 1889, the L&N established repair facilities which, at their peak, employed 2,500 people here. Railroads caused tremendous population growth in Decatur after 1900 and continue to fuel both industrial and population growth today.

The Depot (1905) was built during the era (1902-06) when the most famous architect in the South - and one of the most famous in the nation - Frank Pierce Milburn, was the sole chief architect of the Southern Railway. Mr Milburn in all probability designed the Decatur depot himself, but certainly personally supervised the plans due to his position. He designed about 20 beautiful depots and most were of the Spanish Revival style of Architecture such as seen in the design of the Decatur depot here. Milburn was perhaps the most prolific architect of his day and many of his buildings, including the Decatur depot, are on the National Register of Historic places. 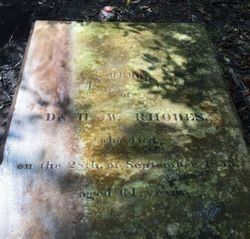 via Find A Grave, unknown
5. Dr. Henry W. Rhodes
Dr. Henry W. Rhodes (abt. 1788-1855) was a member of the Dancy and Sykes families through his marriage to Martha Mason Dancy in 1812. Dr. Rhodes owned the site of a ferry landing crossing the Tennessee River at an old Indian trail. He owned the land on the south side of the river which was known as Rhodes Ferry Landing. He operated this ferry from or before 1818 when this area was established by Alabama Territorial Legislature as Cotaco County (renamed Morgan County in 1821).
Link here:
Click for more information.
which was removed sometime in the distant past. Today, the restored cupola sits on a new terracotta tile roof that was manufactured by the same company that supplied the original roof.

Traveling in Style in 1949
A rare postcard shows the L&N Humming Bird Crossing the Biloxi Bay Bridge in Mississippi. This "de luxe coach steamliner" made the rounds weekly through Decatur (milepost 421).

According to the Louisville & Nashville's 1947 timetable, the Bird could make the jaunt between Cincinnati and New Orleans in exactly 19 hours averaging a speed slightly over 48 mph.

Later, it featured through-sleeper service to St. Louis and Montgomery.

Erected by City of Decatur.

Topics and series. This historical marker is listed in these topic lists: Industry & Commerce • Railroads & Streetcars • Settlements & Settlers • War, US Civil. In addition, it is included in the Former U.S. Presidents: #05 James Monroe series list.

Also see . . .
1. Frank Pierce Milburn (December 12, 1868-September 21, 1926). North Carolina Architects & Builders entry:
An energetic New South architect, Frank Pierce Milburn designed more than forty-five major buildings in North Carolina. He also established the first truly regional practice in the South. Milburn worked throughout the southern states and in Kentucky, West Virginia, and the District of Columbia. Historian Lawrence Wodehouse estimated that he designed at least 250 major structures and numerous domestic buildings. In North Carolina, his work included thirteen courthouses, six railroad stations, thirteen buildings at the University of North Carolina, and at least fifteen large commercial buildings. Working at first on his own, and beginning in 1909 with the firm of Milburn, Heister, and Company, he advanced his career through a combination of aggressive self-promotion, specialization in public and commercial buildings, and innovative business practices. Throughout his career, both alone and as Milburn, Heister and Company, Milburn published several well-illustrated promotional booklets, which contain images of his works. Several of these are listed in the bibliography. In many ways, he set a new standard for architectural practice in the South. (Submitted on May 5, 2017, by Sandra Hughes Tidwell of Killen, Alabama, USA.)