The Bodies of Three Confederate Cavalrymen 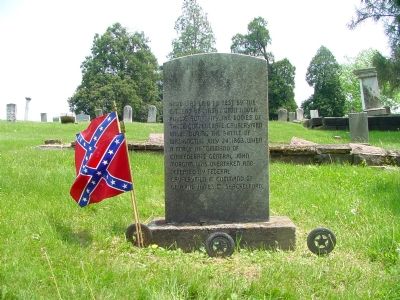 Photographed By J. J. Prats, May 15, 2007
1. The Bodies of Three Confederate Cavalrymen Marker
Inscription.
The Bodies of Three Confederate Cavalrymen. . Here was laid to rest by the citizens of Washington under public authority the bodies of three Confederate cavalrymen killed during the Battle of Washington July 24, 1863, when a force in command of Confederate General John Morgan was overtaken and defeated by Federal cavalrymen in command of General James M. Shackelford. . This historical marker was erected in 1947 by Freeman T. Eagleson with the approval and cooperation of the Village Council. It is in Old Washington in Guernsey County Ohio

Erected 1947 by Freeman T. Eagleson with the approval and cooperation of the Village Council.

Topics. This historical marker is listed in this topic list: War, US Civil. A significant historical date for this entry is July 24, 1965.

Location. 40° 2.2′ N, 81° 26.65′ W. Marker is in Old Washington, Ohio, in Guernsey County. Marker can be reached from Morgan Way (U.S. 40) near Exit 186 North (Interstate 70), on the right when traveling east. From the interstate, make the first turn right to climb up Cemetery hill. Touch for map. Marker is in this post office area: Lore City OH 43755, United States of America. Touch for directions. 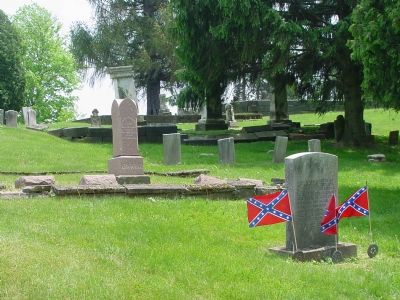 Photographed By J. J. Prats, May 15, 2007
2. The Bodies of Three Confederate Cavalrymen Marker

Also see . . .  Entry of Morgan’s Freebooters into Washington, Ohio. 1863 article and steel-cut illustration from Harper’s Weekly (Submitted on May 20, 2007.) 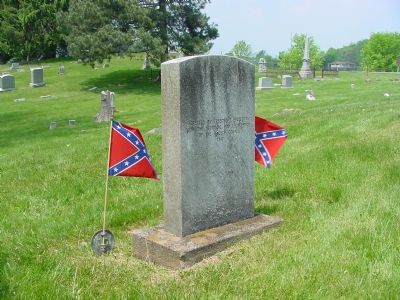