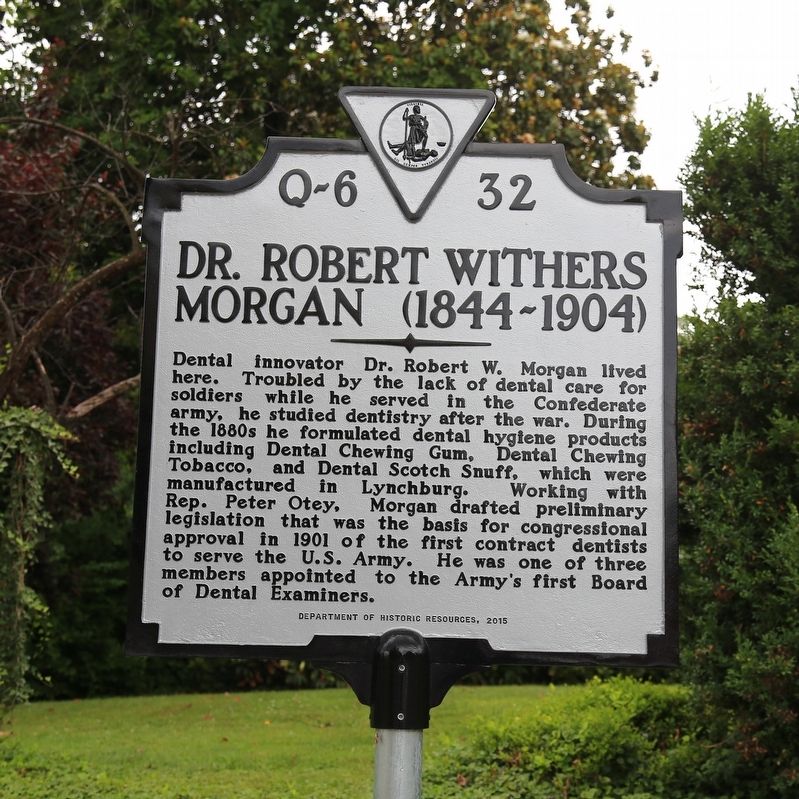 Photographed By J. J. Prats, June 8, 2017
1. Dr. Robert Withers Morgan Marker
Inscription.
Dr. Robert Withers Morgan. (1844–1904). Dental innovator Dr. Robert W. Morgan lived here. Troubled by the lack of dental care for soldiers while he served in the Confederate army, he studied dentistry after the war. During the 1880s he formulated dental hygiene products including Dental Chewing Gum, Dental Chewing Tobacco, and Dental Scotch Snuff, which were manufactured in Lynchburg. Working with Rep. Peter Otey, Morgan drafted preliminary legislation that was the basis for congressional approval in 1901 of the first contract dentists to serve the U. S. Army. He was one of three members appointed to the Army’s first Board of Dental Examiners. . This historical marker was erected in 2015 by Department of Historic Resources. It is in Lynchburg Virginia

Dental innovator Dr. Robert W. Morgan lived here. Troubled by the lack of dental care for soldiers while he served in the Confederate army, he studied dentistry after the war. During the 1880s he formulated dental hygiene products including Dental Chewing Gum, Dental Chewing Tobacco, and Dental Scotch Snuff, which were manufactured in Lynchburg. Working with Rep. Peter Otey, Morgan drafted preliminary legislation that was the basis for congressional approval in 1901 of the first contract dentists to serve the U. S. Army. He was one of three members appointed to the Army’s first Board of Dental Examiners.

Topics and series. This historical marker is listed in these topic lists: Military • Science & Medicine. In addition, it is included in the Virginia Department of Historic Resources series list. A significant historical year for this entry is 1880. 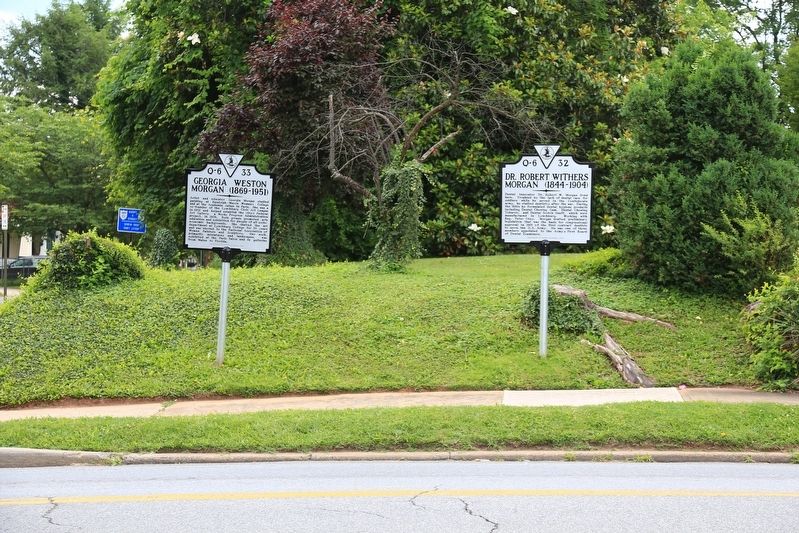 Click or scan to see
this page online
Avenue (Virginia Route 163) and Munford Street, on the left when traveling west on Memorial Avenue. Touch for map. Marker is at or near this postal address: 1900 Memorial Avenue, Lynchburg VA 24501, United States of America. Touch for directions.

Other nearby markers. At least 8 other markers are within walking distance of this marker. Georgia Weston Morgan (here, next to this marker); Horse Drawn Road Grader (about 700 feet away, measured in a direct line); Model 1474 Gallion Roller (about 700 feet away); Edward Christian Glass (1852-1931) (approx. ¼ mile away); Lucille Chaffin Kent (approx. ¼ mile away); Civil War in Lynchburg (approx. 0.3 miles away); Kemper Street Station (approx. 0.3 miles away); Mustered and Disbanded 1861-1865 (approx. 0.4 miles away). Touch for a list and map of all markers in Lynchburg.

Also see . . .  2000 National Register of Historic Places Inventory for Centerview. Excerpt from Statement of Significance by J Daniel Pezzoni. “On August 10, 1876, James and Sarah Irvine sold a parcel of slightly over seven acres including a ‘brick dwelling and other buildings’ to Robert W. Morgan for $2,450.00. A native of Campbell County, Robert Withers Morgan volunteered for service in Company E of the 11th Virginia Infantry early in the Civil War. He received wounds at the second battle of Manassas and was captured at an action at Milford Station in 1864 and held at the Point Lookout prisoner of war camp in Maryland. After the war he operated a store in Floyd County with his brother Buck, but he returned to the Lynchburg area in 1873 to study dentistry under Dr. Robert Lemon. Morgan opened 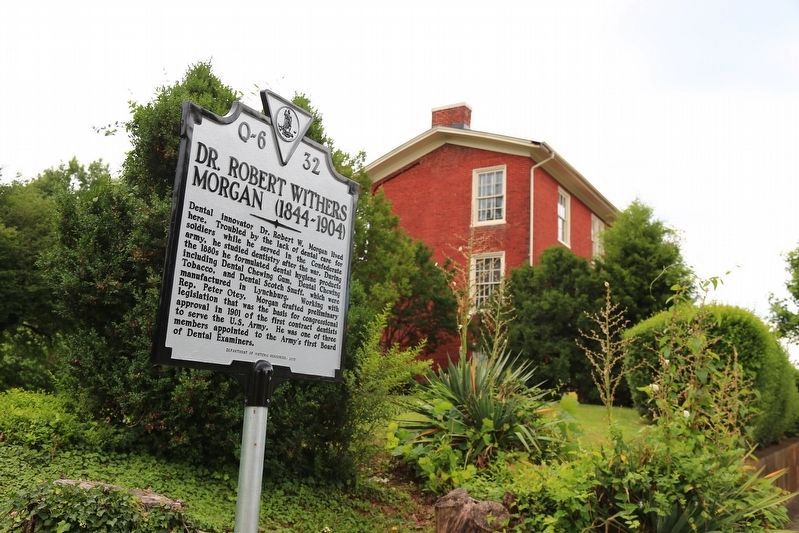 Photographed By J. J. Prats, June 8, 2017
3. Marker and view of Centerview, Dr. Morgan's Residence from 1876 until his death
a dentist’s office in Lynchburg in 1879, and two years later he enrolled at the Baltimore College of Dental Surgery, returning to Lynchburg upon graduation. During the years 1883 to 1885 Morgan associated with Dr. W. W. Moss, who lived with the Morgan family, and with Dr. Henry Wallace Canada after 1885. Morgan apparently moved his downtown office frequently during the 1880s-1890s period.)

“Morgan developed formulas for a number of products designed to inhibit tooth decay. One was ‘Dental Chewing Gum,’ manufactured by the Dental Chewing Gum Company, which circulated a photographic advertisement depicting Morgan’s sons Peyton and Hood in a mouth-to-mouth chewing gum tug-of-war. According to one account the business was ‘fairly successful,’ but problems in obtaining the chicle used to make the gum brought an end to the enterprise. Dr. Morgan also concocted recipes for dental chewing tobacco and snuff. A testimonial for ‘Dr. Morgan's Dental Chewing Tobacco’ explained the proper use of the substance: ‘You have only, after meals, to apply your quid and the acid secretions from between the teeth are at once removed, thus removing the first cause of all the trouble with our teeth.’ Morgan later sold his formulas to R. I. Owen and Willinm Chistopher Ivey, who manufactured the medicated tobaccos at their extensive ‘Dental Snuff Works’ at 4th and Federal streets 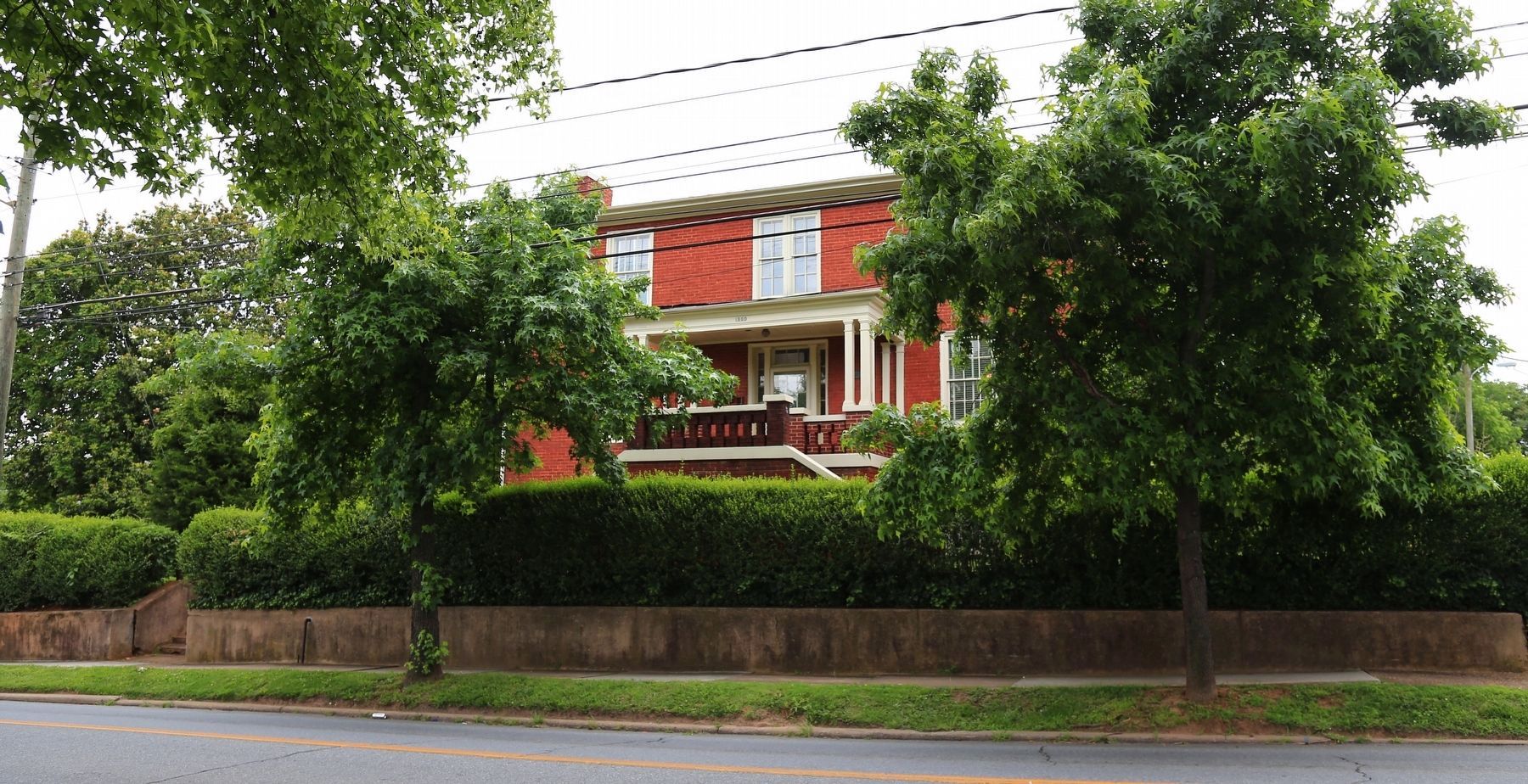 Photographed By J. J. Prats, June 8, 2017
4. Centerview.
Markers are out of frame on the left.
in Lynchburg. Ivey and Owen went into the snuff business in 1883, and they formed the Dental Snuff Company in 1898. Morgan probably used antiacid and antiseptic chemicals to give his preparations their advertised properties.

“Robert W. Morgan practiced dentistry during an era of growing professionalism in the specialty. Traditionally, barbers and other non-professionals had provided dental care to the public, the ‘care’ usually involving the extraction of diseased teeth. Professional dentists were a rarity; during the Civil War a single full-time dentist served federal forces. The situation changed dramatically after the war. State dental societies organized, a national organization—the American Dental Association—gained strength, and by one account there were 13,000 members of organized dentistry in 1870 (few of these individuals were probably professionally trained, however). New techniques, prostheses, and anaesthetics came into use, and germ theory provided a scientific basis for understanding dental problems.

“Dr. Morgan resolved to introduce these advances in dentistry to a grossly underserved sector of American society: the armed forces. Impetus came from Morgan’s Civil War experiences. ‘Seeing soldiers suffer from lack of attention to their teeth,’ wrote a historian, ‘suggested the idea of having a dental corps 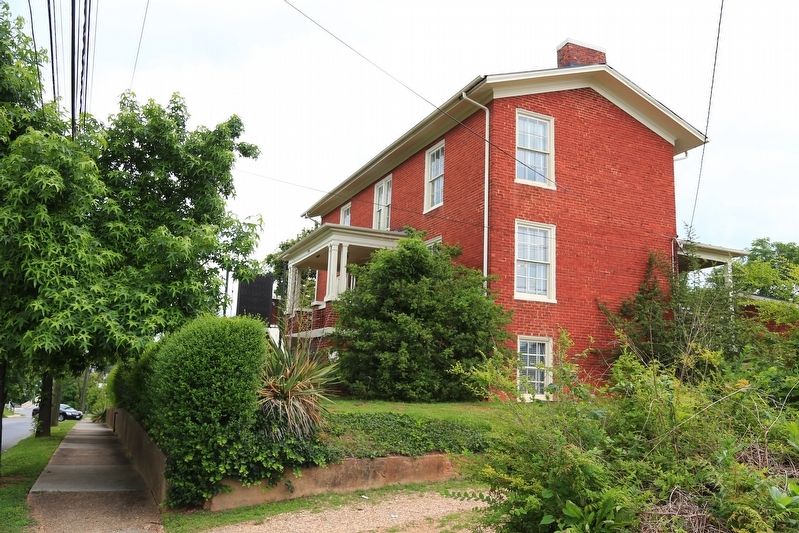 Photographed By J. J. Prats, June 8, 2017
5. Centerview
in the regular army.’ Morgan promoted his ideas during the era of the Spanish-American War, a health care disaster that convinced the government of the need to improve and reorganize military medical services. According to historian Mary Giett, it became obvious ‘that a handful of hospital corpsmen functioning as dentists could not successfully treat the rapidly decaying teeth of the large numbers of troops being sent to the tropics.’ Morgan drafted legislation to create a corps of professional dental surgeon, and with the sponsorship of U. S. Congressman Peter J. Otey of Lynchburg a version of the bill was passed into law in February 1901 and the U.S. Army Dental Corps (DC) established. Morgan did not labor alone; the profession had worked since the 1860s to pass legislation establishing dental care for the military, and in the late 1890s the National Dental Association lent its weight to passage of legislation based on Morgan's bill.

In recognition of his efforts, Morgan was appointed to a newly formed board of three dental examiners charged with approving dentists for the DC. He served with the first president of the Army Board of Dental Examiners, Dr. John Sayre Marshall, who had also worked for military dental care and who is generally acknowledged as the ‘father of the Army Dental Corps.’ The Board was short-lived at the end of 1901 the three examiners were assigned to field offices, Morgan’s in Havana. Morgan apparently considered leaving military service at this time, as revealed in a letter from Dr. John S. Marshall dated December 18, 1901. Marshall wrote: ‘I hope, if you do not remain in the service, that you will not loose your interest in our Corps, and that you will do all in your power to nourish and feed what may in a sense be called “your child.” For you through Major Otey presented the first bill looking to the formation of a Dental Corps, and prepared the way for the bill which finally passed.’

“Morgan decided to accept the assignment, but while in Cuba his health declined—according to one account he contracted malaria—and he returned to Lynchburg where he died in 1904. A better fortune awaited the ‘child’ that Morgan and Marshall had helped bring to term. The DC grew in size and efficacy over the years, and by 1994, 1,244 dentist-officers served in its ranks.

A few things are known about the character of the Centerview property during the period that Dr. Morgan, his wife Mary Jane (‘Janie’) Moorman (1843-1921), and the couple’s six children lived there. G. W. Baist’s 1891 map of Lynchburg shows three buildings on the property; two are likely the house and dependency, the third, which is located farther back on the lot, was probably a barn. A photograph dating to the early twentieth century shows what is probably the original porch, with square wood columns and sawn porch and step balustrades with vasiform slats. The names of Centerview’s surroundings and nearby streets evolved through time. The house stands on what was known as the Forest Road in the Civil War era. Fifth Street Extension at the end of the nineteenth century, and finally Memorial Avenue in the twentieth century. A Lynchburg city directory from the mid-1880s may refer to the area as Clover Valley. In 1909 Mary J. Morgan had all or a portion of her property subdivided as Morgan Heights, and in 1923 the property was resurveyed as Center View Square, the earliest known reference to the name Centerview. Orchard Street, which borders Centerview on the northeast, is said to have been named after Dr. Morgan’s large orchard planted with fruit, berry, and nut trees.” (Submitted on June 16, 2017.)
Credits. This page was last revised on April 17, 2020. It was originally submitted on June 15, 2017, by J. J. Prats of Powell, Ohio. This page has been viewed 371 times since then and 85 times this year. Photos:   1, 2. submitted on June 15, 2017, by J. J. Prats of Powell, Ohio.   3, 4, 5. submitted on June 16, 2017, by J. J. Prats of Powell, Ohio.
Share this page.