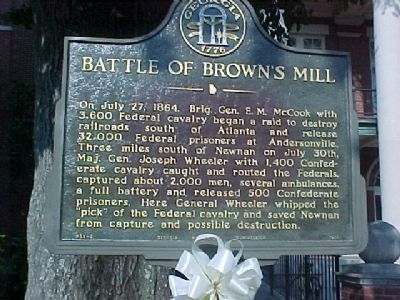 Topics and series. This historical marker is listed in this topic list: War, US Civil. In addition, it is included in the Georgia Historical Society series list. A significant historical month for this entry is July 1862. 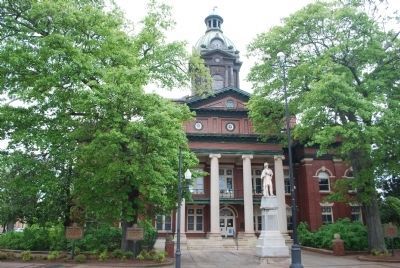 Click or scan to see
this page online
Courthouse (now the Coweta County Probate Court). Touch for map. Marker is at or near this postal address: 200 East Court Square, Newnan GA 30263, United States of America. Touch for directions. 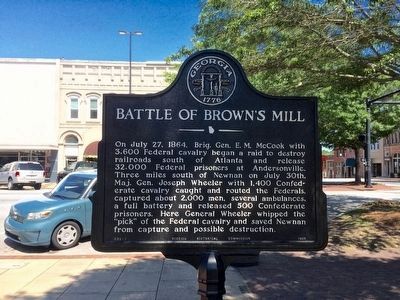 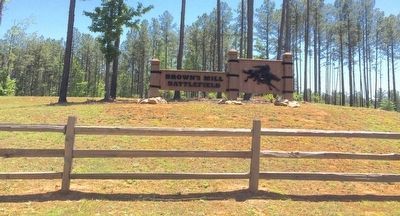 Photographed By Mark Hilton, May 15, 2016
4. Brown's Mill Battlefield located at 155 Millard Farmer Road
The Brown's Mill Battlefield Historic Civil War Site in Newnan, Ga., opened to the public in July 2013, nearly 149 years after the day of the significant battle. The 104-acre site is dedicated to the Confederate and Union soldiers who fought and died there on July 30, 1864, and to the Confederate and Union medical staffs who tended to the wounded after the battle. As a result of the battle, Major General William T. Sherman was forced to adopt new tactics for the Atlanta Campaign.
Credits. This page was last revised on May 30, 2020. It was originally submitted on August 19, 2008, by Dianne Wood of Newnan, Georgia. This page has been viewed 2,813 times since then and 134 times this year. Photos:   1. submitted on August 19, 2008, by Dianne Wood of Newnan, Georgia.   2. submitted on August 19, 2008, by Kevin W. of Stafford, Virginia.   3, 4. submitted on May 15, 2016, by Mark Hilton of Montgomery, Alabama. • Craig Swain was the editor who published this page.
Share this page.