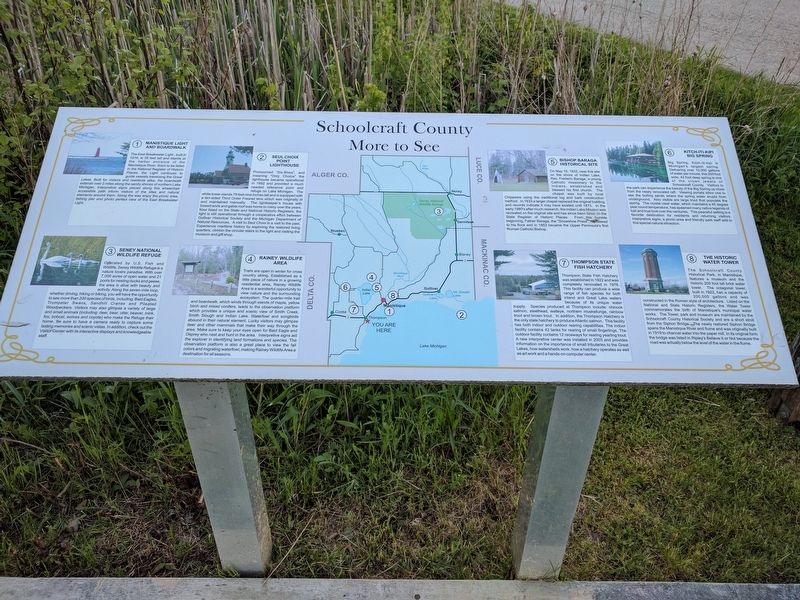 (1) Manistique Light and Boardwalk
The East Breakwater Light , built in 1916, is 35 feet tall and stands at the harbor entrance of the Manistique River. Soon to be listed in the National Register of Historic Places, the Light continues to guide vessels traversing the Great Lakes. Built for visitors and residents alike, the boardwalk extends over 2 miles along the sandy shores of northern Lake Michigan. Interpretive signs placed along this wheelchair accessible path inform visitors of the sites and natural elements around them. Along the way enjoy the picnic area, fishing pier and photo perfect view of the East Breakwater Light.

(2) Seul Choix Point Lighthouse
Pronounced "Sis-Shwa", and meaning "Only Choice" the lighthouse became operational in 1892 and provided a much needed reference point and refuge on Lake Michigan. The white tower stands 79 feet nine inches tall and is equipped with a ten-sided Third Order Fresnel lens which was originally lit and maintained manually. The lightkeeper's house with bowed ends and gable roof was home to many over the years. Now listed on the State 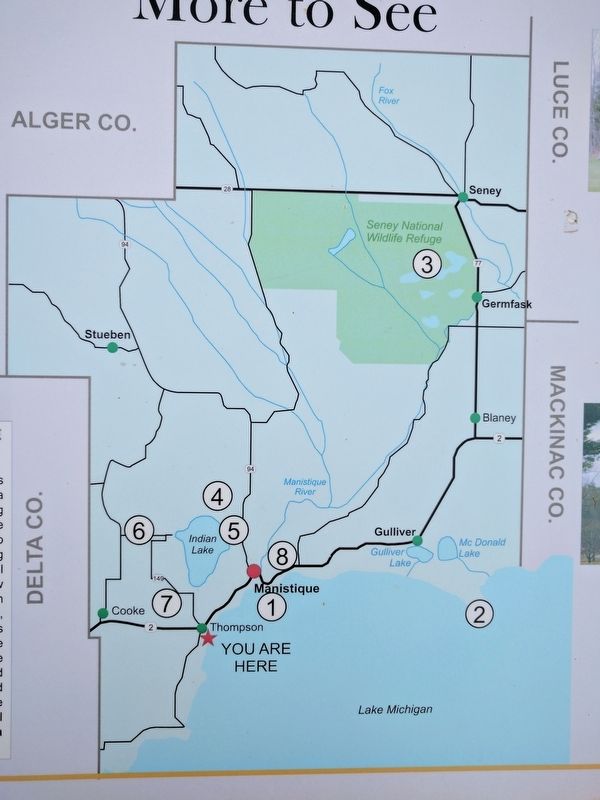 By Joel Seewald, May 31, 2017
2. Closeup of Map
and National Historic Registers, the light is still operational through a cooperative effort between Gulliver Historical Society and the Michigan Department of Natural Resources. A visit to Seul Choix is a visit to the past. Experience maritime history by exploring the restored living quarters, climbin the circular stairs to the light and visiting the museum and gift shop.

(3) Seney National Wildlife Refuge
Operated by U.S. Fish and Wildlife, Seney Wildlife Refuge is a nature lovers paradise. With over 7,000 acres of open water and 21 pools for nesting ducks and geese, the area is alive with beauty and activity. Along the seven-mile loop, whether driving, hiking or biking, you will have the opportunity to see more than 200 species of birds, including: Bald Eagles, Trumpeter Swans, Sandhill Cranes and Pileated Woodpeckers. Visitors may also glimpse a variety of large and small animals (including: deer, bear, otter, beaver, mink, fox, bobcat, wolves and coyote) who make the Refuge their home. Be sure to have a camera ready to capture some lasting memories and scenic vistas. In addition, check out the Visitor Center with its interactive displays and knowledgeable staff.

(4) Rainey Wildlife Area
Trails are open in winter for cross country skiing. Established as a little piece of nature in a growing residential area, 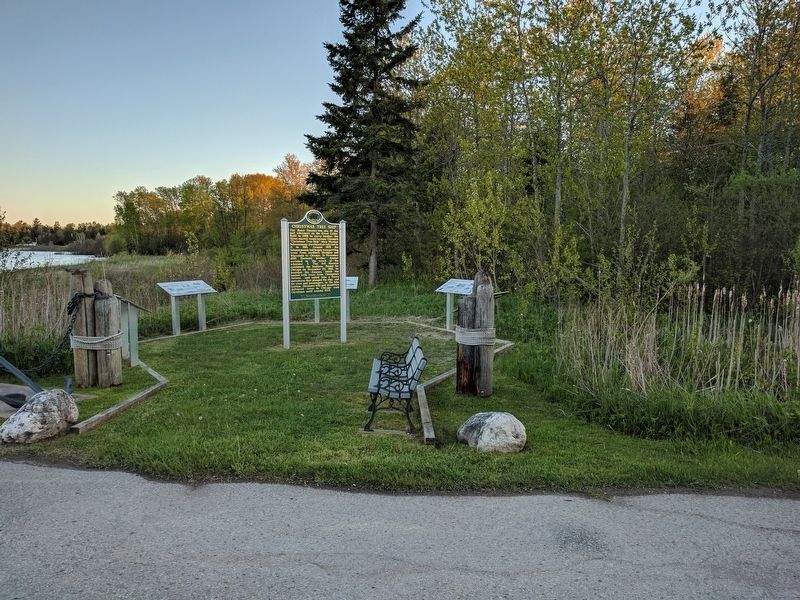 By Joel Seewald, May 31, 2017
3. Schoolcraft County Marker
This marker is the one on the far right (not facing the camera and partially obscured by the pilings).
Rainey Wildlife Area is a wonderful opportunity to view nature and the surrounding ecosystem. The quarter-mile trail and boardwalk, which winds through stands of maple, yellow birch and mixed conifers, leads to the observation platform which provides a unique and scenic view of Smith Creek, Smith Slough and Indian Lake. Waterfowl and songbirds abound in their natural element. Lucky visitors may glimpse deer and other mammals that make their way through the area. Make sure to keep your eyes open for Bald Eagle and Osprey who nest and hunt in the area. Interpretive signs aid the explorer in identifying land formations and species. The observation platform is also a great place to view the fall colors and migrating waterfowl, making Rainey Wildlife Area a destination for all seasons.

(5) Bishop Baraga Historical Site
On May 15, 1832, near this site on the shore of Indian Lake, Rev. Frederic Baraga, a young Catholic missionary to the Indians, established and blessed his first church. The chapel was built by local Chippewa using the traditional log and bark construction method. In 1833 a larger chapel replaced the original building and records indicate it may have existed until 1873. In the early 1980's after much research, the Indian Lake Mission was recreated on the original site and has since been listed on the State Register of Historic Places. From this humble beginning, Father Baraga, the "Snowhoe Priest", ministered to his flock and in 1853 became the Upper Peninsula's first Roman Catholic Bishop.

(6) Kitch-iti-kipi Big Spring
Big Spring, Kitch-iti-kipi is Michigan's largest spring. Delivering over 10,000 gallons of water per minute, this 200 foot wide, 42 foot deep spring is one of the crown jewels of Schoolcraft County. Visitors to the park can experience the beauty of the Big Spring up close from the newly renovated raft. Viewing portals allow one to see the boiling sands where the spring water erupts from underground. Also visible are large trout that populate the spring. The crystal clear water, which maintains a 45 degree year round temperature, has spawned many native legends of lost and true love over the centuries. This peaceful setting is a favorite destination for residents and returning visitors. Interpretive signs, a picnic area and a friendly park staff add to this special natural attraction.

(7) Thompson State Fish Hatchery
Thompson State Fish Hatchery was established in 1922 and was completely renovated in 1978. This facility can produce a wide range of fish species for both inland and Great Lake waters because of its unique water supply. Species produced at Thompson include: chinook salmon, steelhead, walleye, northern muskellunge, rainbow trout and brown trout. In addition, the Thompson Hatchery is the only state hatchery to produce Atlantic salmon. This facility has both indoor and outdoor rearing capabilities. The indoor facility contains 42 tanks for rearing small fingerlings. The outdoor facility contains 12 raceways for rearing yearling trout. A new interpretive center was installed in 2003 and provides information on the importance of small tributaries to the Great Lakes, how watersheds work, how a hatchery operates as well as art work and a hands-on computer center.

(8) The Historic Water Tower
The Schoolcraft County Historical Park, in Manistique, features a museum and the historic 200 foot tall brick water tower. The octagonal tower, built in 1922, has a capacity of 200,000 gallons and was constructed in the Roman style of architecture. Listed on the National and State Historic Registers, the Water Tower commemorates the birth of Manistique's municipal water works. The Tower, park and museum are maintained by the Schoolcraft County Historical Society and are a short stroll from the Siphon Bridge. The newly restored Siphon Bridge span the Manistique River and flume and was originally built in 1919 to channel water into the paper mill. In its original form the bridge was listed in Ripley's Believe It or Not because the road was actually below the surface of the water in the flume.