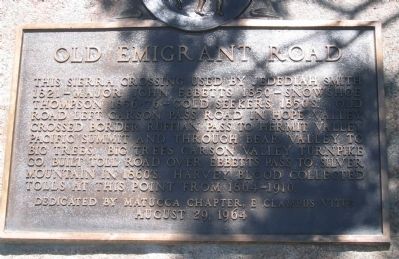 Topics and series. This historical marker is listed in these topic lists: Exploration • Roads & Vehicles • Settlements & Settlers. In addition, it is included in the E Clampus Vitus series list. A significant historical year for this entry is 1821.

Other nearby markers. At least 8 other markers are within 13 miles of this marker, measured 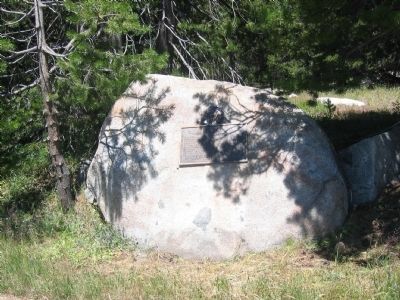 Additional commentary.
1. From the Journal of William H. Brewer
Murphys, California, August 13, 1863: “Recent reputed discoveries of silver ore at Silver Mountain, just east of the crest, on the head-waters of the Carson river, near Ebbetts Pass, have caused much excitement. An old immigrant road over the mountains, via the Big Trees, runs within ten or twelve miles of it and now, suddenly, travel is poring over this route. A stage runs part of the way until the road becomes very rough; then a “saddle train” with a few pack animals takes the passengers and their luggage to the promised land. At Silver Valley [now the site of Lake Alpine] the stages stop and the “saddle trains” start.”