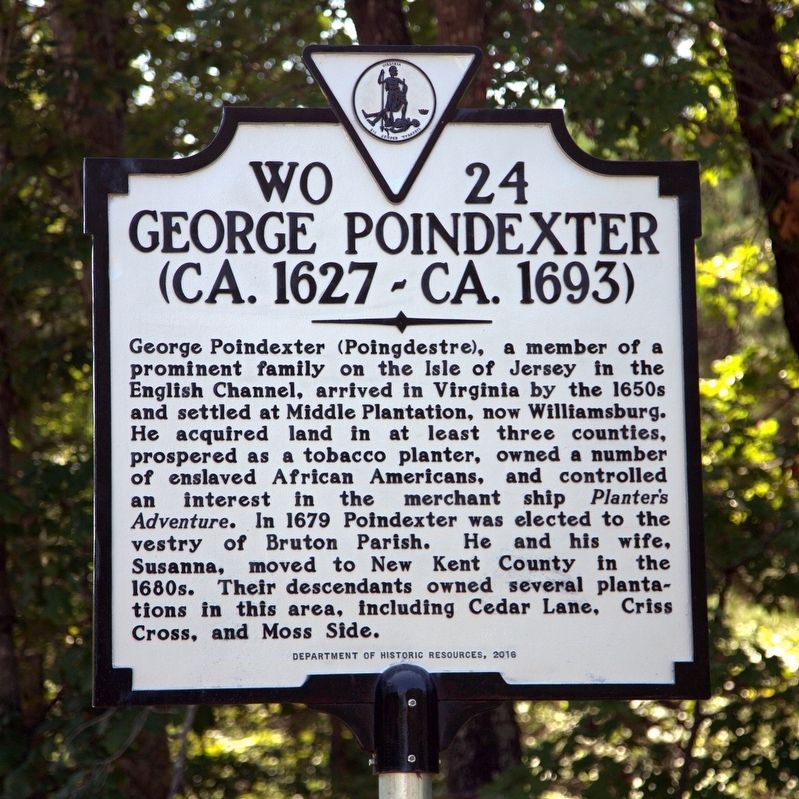 By J. J. Prats, August 20, 2017
1. George Poindexter Marker
Inscription.
George Poindexter (Poingdestre), a member of prominent family on the Isle of Jersey in the English Channel, arrived in Virginia by the 1650s and settled at Middle Plantation, now Williamsburg. He acquired land in at least three counties, prospered as a tobacco planter, owned a number of enslaved African Americans, and controlled an interest in the merchant ship Planter's Adventure. In 1679 Poindexter was elected to the vestry of Bruton Parish. He and his wife, Susanna, moved to New Kent County in the 1680s. Their descendants owned several plantations in this area, including Cedar Lane, Criss Cross, and Moss Side. . This historical marker was erected in 2016 by Department of Historic Resources. It is Near New Kent in New Kent County Virginia

George Poindexter (Poingdestre), a member of prominent family on the Isle of Jersey in the English Channel, arrived in Virginia by the 1650s and settled at Middle Plantation, now Williamsburg. He acquired land in at least three counties, prospered as a tobacco planter, owned a number of enslaved African Americans, and controlled an interest in the merchant ship Planter's Adventure. In 1679 Poindexter was elected to the vestry of Bruton Parish. He and his wife, Susanna, moved to New Kent County in the 1680s. Their descendants owned several plantations in this area, including Cedar Lane, Criss Cross, and Moss Side.

Erected 2016 by Department of Historic Resources. (Marker Number WO-24.)

Topics and series. This historical marker is listed in these topic lists: Colonial Era • Settlements & Settlers. In addition, it is included in the Virginia Department of Historic Resources series list. A significant historical year for this entry is 1679. 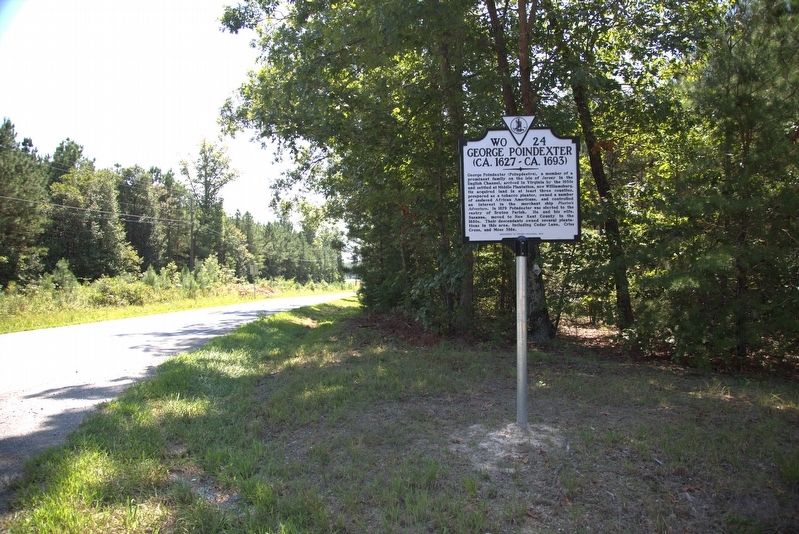 Click or scan to see
this page online
. Marker is at the intersection of North Courthouse Road (Virginia Route 155) and Poindexter Road (County Route 604), on the left when traveling north on North Courthouse Road. It is just north of Interstate 64 exit 214. Touch for map. Marker is in this post office area: New Kent VA 23124, United States of America. Touch for directions.

Also see . . .
1. Timeline of an Immigrant. (Submitted on August 23, 2017, by J. J. Prats of Powell, Ohio.)
2. 1973 NRHP Nomination Form for Criss Cross. Criss Cross stands on a gentle knoll surrounded by cultivated fields and woodland and is reached by unpaved state and private roads. The house enjoys an immediate environment whose character has changed little since it was built late in the seventeenth century. Although much altered, the house retains its original overall appearance and important late-seventeenth century detailing.

The brick house is T-shaped in plan, and like nearby Foster's Castle, and the Mathew Jones house in Newport News, it was a one or a one-and-a-half- 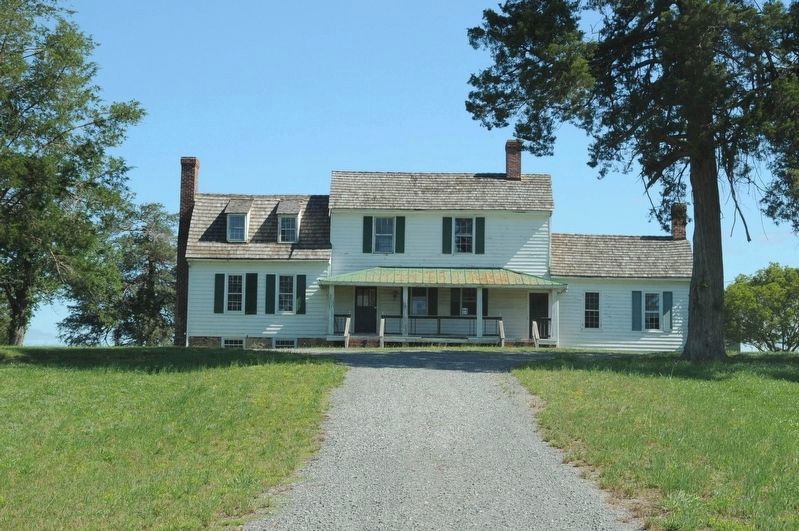 Jerrye & Roy Klotz M.D. via Wikipedia Commons, May 26, 2017
3. Cedar Lane Plantation House
story building with a two-story single-bay projection in the center of the facade. The original walls are Flemish bond with glazed headers, constructed of unusually thick bricks, averaging 8¾" x 4¼" x 3¼". The watertable consists of mixed Flemish and English bonds on the main body of the house, with predominantly Flemish on the porch projection. Much of the brickwork of the front wall of the projection has been replaced, but it retains belt course that wraps around the sides between the first and second floors and breaks upward on the front projection to emphasize the doorway.

The three brick gables were replaced with wood in the nineteenth century, the east end wall being completely rebuilt in wood. At that time the porch projection was raised several feet and given a less steeply pitched gable roof. The brick exterior end chimneys also date from the nineteenth century. However, the original ones apparently were in the same position since the interior summer beam runs the length of the rooms rather than being shortened by chimneys projecting inward. In the same period, the eastern half of the main body was raised to two stories. The window openings are in their original locations, but the trim and sash date from the nineteenth century. Exterior restoration in 1953 removed the addition above the porch chamber and returned its roof to the approximate original pitch. Also during this restoration the frame second floor was removed from the main body. The pitch of the western end of the main roof is believed to have remained unchanged, and Harden DeV. Pratt, the restoration architect, found one rafter in situ that he believed to be original. The later brickwork of the front wall of the projection was replaced with new Flemish bond, as was the frame east end. Wood was retained as the material of the new gables, rather than rebuilding them in brick.

Tradition has it that the frame back wing was added in 1790, and this addition appears to have been raised from one-and-a-half to two stories in the second half of the nineteenth century. As part of the restoration of 1953, the back wing was encased in one story of brick and given a gambrel roof. Pratt believed that he found evidence of an original north wing in the brickwork of the north wall. Such a wing, perhaps containing the original stair, could have mirrored the form of the existing porch chamber and formed a genuine cross plan, but no definite evidence was recorded and it can not be safely assumed that an original wing existed int1is location.

The original interior plan consisted of a hall-and-parlor on the first floor, the larger room being entered from the enclosed porch chamber. With the 1790 addition, the entrance front was changed from the south to the north, through the new wing. At some point, the eastern part of the large hall room was partitioned off to form a center hall plan. The partition was removed in the recent restoration and the main block of the house was returned to a hall-and-parlor plan.

The interior of Criss Cross retains its original structural system and several rare period details. The ceiling of the porch chamber exhibits an east-west transverse girder into which floor joists are set. This exposed framing is chamfered, the beam with ovolos and the joists with cyma curves. A large summer beam running the length of the building and chamfered with cavetto, soffit, and ovolo mouldings, and a wall plate are supported at the wall between the two rooms by a decorated vertical post. The east and west sides of the post, exposed in the dividing wall, exhibit unusual low-relief carvings. The post is slightly thickened just below the summer beam, forming a rectangular block with a heavy horizontal bead. Below is a “scrolled” heart topped by an inverted triangle. The ceiling joists of the hall and parlor arc covered with plaster, the visible minor framing being a 1953 cosmetic addition. An original set of double doors survives at the entrance from the porch chamber into the hall. They consist of flush vertical boards whose porch faces are developed with stiles a central muntin, and four rails. The elevation of each door consist of two vertical rectangles and squares above a lock rail and long vertical rectangles below, the flat panels being framed by s series of shallow ogee-curve mouldings. The door architrave also has a profile built up with moulding curves not typical of eighteenth century Virginia work. The hall-parlor doorway also retains its early frame, but the door is later. Other doors and several mantels in the original house and rear addition date from the late eighteenth and early nineteenth centuries, including the front door, which is constructed of vertical beaded boards. A Victorian stair with a heavy turned newel was moved but retained in the hall during restoration. Chair rail trim taken from old buildings in the area was added then, as was an interesting provincial Adam-type mantel in the parlor.

A cellar exists under the hall and back wing. Between, the cellar’s two rooms is a large square door of vertical and horizontal boards hung with strap hinges on pintles. A filled-in arched opening of undetermined purpose is visible in the east wall of the cellar below the hall-parlor dividing wall.

Statement of Significance. The exterior of Criss Cross has suffered a number of alterations, but significant exterior fabric survived and the building has now been returned to its general original appearance. As such, it is one of Virginia’s four existing Tudor-Stuart style structures with porch projections, the others being nearby Foster’s Castle, the Mathew Jones House in Newport News, and Bacon’s Castle in Surry County. The two story porch projection appears to represent a major seventeenth and very early eighteenth century Virginia building form. The interior contains especially rare period framing and details, the hall-porch door and post carving being the only such survivals in the state.

Little is known about Criss Cross’ early history, but according to tradition, it was built by George Poindexter about 1690. Poindexter had moved to New Kent County from Gloucester by 1681, when he is recorded as being in St. Peter's Parish. He was elected a vestryman of the parish in 1690, but he refused to serve. The back wing was added around 1790. The house is believed to have left the Poindexter family circa 1830, and J.F. Gilmer's 1863 map of the county shows that Criss Cross was occupied by S.P. Marsters, with Poindexters still living in the area. The house is said to have been used as a commissary during the War Between the States, and as a refuge for Mrs. Fitzhugh Lee after the destruction of nearby White House by Federal Forces in 1862. The present owners, Mr. and Mrs. E.E. Harrison, bought the house in 1953 and undertook extensive restoration. They did not attempt to return the house to its exact original form, however, and therefore interesting post-seventeenth century interior details were retained. —E.A.C. (Submitted on August 23, 2017.)
Credits. This page was last revised on March 2, 2021. It was originally submitted on August 23, 2017, by J. J. Prats of Powell, Ohio. This page has been viewed 468 times since then and 65 times this year. Photos:   1, 2, 3. submitted on August 23, 2017, by J. J. Prats of Powell, Ohio.
Share this page.