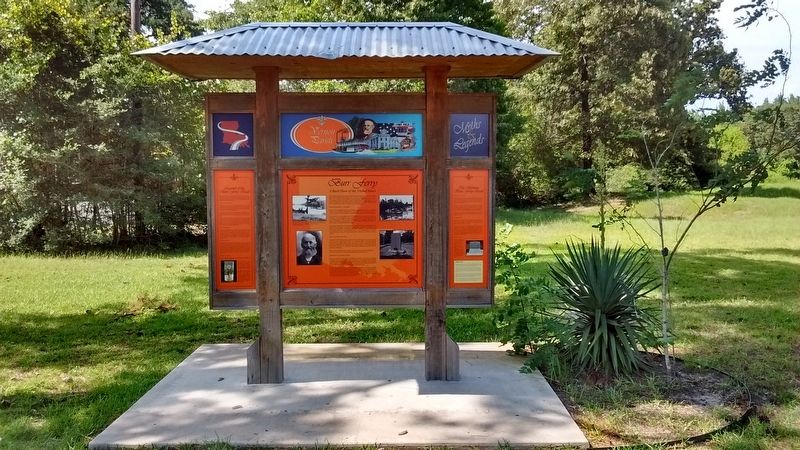 (center panel)
A Back Door of the United States

Throughout its history, Burr Ferry has stood as an important location in western Louisiana. Many Texas cattlemen relied on Burr Ferry to cross the Sabine river in order to drive their herds to Opelousas and Alexandria, and many pioneers heading west used the ferry as a jumping-off point to the frontier. Traders used the location to move goods across the Sabine, and people also claim that Aaron Burr considered it an excellent staging point for his secret plan to invade Texas and annex it for the United States.

Everyone Must Pay the Ferryman

Since few rivers had bridges, early travelers either crossed at fords or swam. As commercial needs increased, commerce demanded a more reliable means of transportation. Simple to construct and easy to operate, ferries became the common option for crossing waterways. Ferries varied in size and construction, but the familiar ferry in western Louisiana was a flat barge. A common technique in ferry operation was to stretch cables across the river. The ferryman used the cables not only as a guide but also 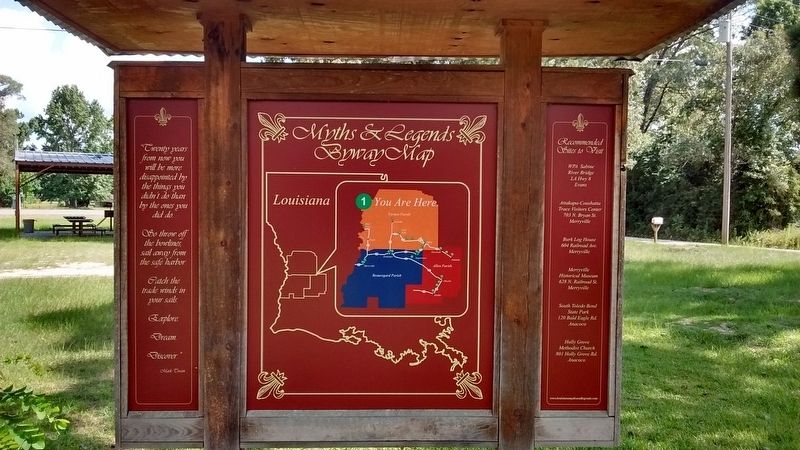 Click or scan to see
this page online
as a means of propulsion. The cables ran through a system of pulleys, and as the ferryman pulled cables hand over hand, the ferry was propelled through the water.

The ferryman charged to transport passengers to and fro. The fares were posted near the bank; however, passengers could expect a slight increase in fares if they wanted to cross at night or in bad weather. Cattle drovers also relied on ferries to transport wagons and other supplies while they swam their herds across rivers. Swimming the herd could be quite exhausting, so many ferries advertised a place to pasture the herd before or after a crossing.

During the Civil War, Texas suspected Federal forces would use Burr Ferry as an invasion point. To protect themselves from this very real threat, Texas constructed extensive breastworks (low earthen walls) on their side of the river and cut away all the timber to provide an unobstructed view for the guards. Defensive breastworks were built on the Louisiana shore as well. After the war started, men and supplies frequently crossed from Texas to supply the Confederacy.

However, even though the ferry became an important strategic point for the South, the only war action here was a small skirmish against Union cavalry scouts.

How Burr Ferry Earned Its Name 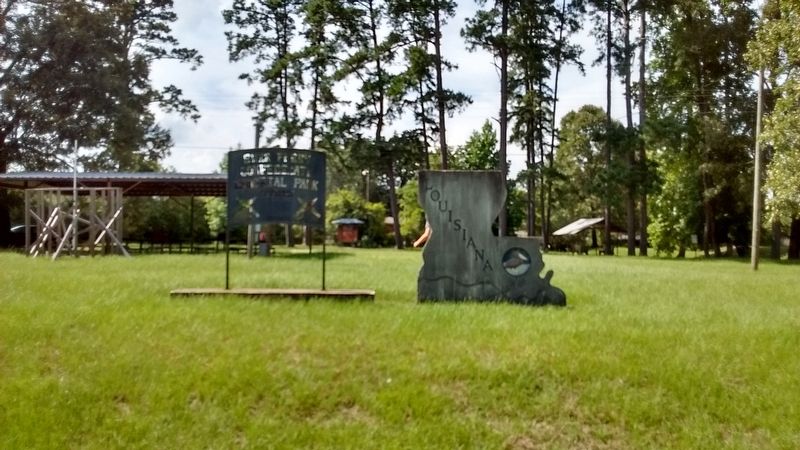 By Tom Bosse, July 4, 2017
3. Burr Ferry Marker
its name from Dr. Timothy Burr, a cousin of Aaron Burr. According to the family’s history, Dr. Burr and six other men left Ohio in 1807 and floated down the Ohio and Mississippi Rivers. Eventually, Burr crossed overland to Natchitoches and traveled the Sabine looking for a favorable place to settle. During the trip, he and his men settled at the site of a clear and beautiful stream, which they called Pearl Creek.

Dr. Burr was a physician, businessman, and farmer. He established a cotton gin, a gristmill, and a sawmill in his newly founded settlement, and he also build a ferry. According to legend, Dr. Burr’s farmlands were positioned on the Louisiana side of the Sabine River, hoever, he kept his slaves on the Texas side. Dr. Burr built a ferry to transport his workers back and forth. Other settlers asked if they too could be ferried from one bank to the other. Dr. Burr saw its potential and turned the ferry into a business.

Burr Ferry’s historical role as a crossing provides it with a rich body of lore. Legends grow here as thick as trees in the pine forests, and many of these stories tell of a ragged, lawless landscape. They also relate the lives of the sturdy men and women who braved it as well as the unscrupulous men and women who used it to their advantage.

“John Doe”, the most famous counterfeiter of No Man’s Land, duped unsuspecting westward travelers by trading them forged Mexican silver dollars. His forgeries looked real and tested as pure silver, even though they weren’t. Travelers were convinced they’d made a good deal until they traveled across the river and couldn’t spend the fakes.

Eventually word about the forgeries spread, and no one in America would buy his worthless Mexican coins. In response, John Doe moved to Texas and began making counterfeit American dollars for those travelers headed back east.

Natives of No Man’s Land did not consider John Doe a criminal. They knew a “John Doe silver dollar” was as good as legal tender since unsuspecting travelers were almost always willing to trade away their American silver for his forgeries. Legend says the counterfeiter remains unnamed to this day because one local man when questioned by authorities refused to give up John Doe’s identity. He didn’t believe John Doe was doing “all that much that wrong”. After all, he hadn’t killed anybody.

For smuggler and settler, the way to Burr Ferry was marked by a single sassafras tree., which stood alone on a high hill. Travelers looked to the tree as a reliable landmark indicating which direction they should head to reach the ferry. Over the years, the Lone Sassafras tree stood as a helpless spectator to countless thefts, murders, and hangings. Some even claim that the infamous Murrell Gang buried a stash of gold near its trunk. Holes once circled the tree – a sign of treasure hunters digging for the rumored treasure. The tree no long stands.

The traffic at Burr Ferry drew both upstanding citizens and outlaws. Cattlemen crossed at Burr Ferry on their way to sell their cattle at market and then would return with gold from the sale. Outlaws quickly realized the ferry was a prime spot to watch for returning cattlemen with sagging belts, heavy with gold. Then, the outlaws ambushed the unsuspecting cattlemen. Trusting that only a reckless few would pursue them, they swan their horses across the river to escape. Sometimes, though, the treacherous waters proved too dangerous even for brazen outlaws. Many were swept to their deaths. People say the pickings stolen by the outlaws wait to this day, somewhere at the bottom of the Sabine.

Not far from this spot lies Plunkaway Cemetery. The small cemetery contains many handmade concrete markers.

Some gravestones have inscriptions, but the cemetery also holds many “unknown” graves that mark travelers who died along the trail. The graveyard stands as a testament of the dangers travelers endured.

One legend says the cemetery acquired its unusual name from an outlaw who met his end sometime around 1850. The outlaw was in injured in a shootout (a result of his nefarious deeds), and before he died, the locals asked the man where he wanted to be buried. “Just plunk me away over there,” he said. The name stuck.

The road at Burr Ferry was one of four key roads that traversed the river and crisscrossed no Man’s Land. First animal trails, then walking paths, then small wagon trails – early roads were narrow and rutted. Many early roads stood as little more than vague paths winding through the pinewoods and thick brush.

Running through this remote and sparsely populated area, roads in No Man’s Land could be lonely and friendless places. While long-established settlers and squatters transported goods on these early roads, highwaymen also traveled them to prey on isolated travelers. Even inns and boarding houses along the roads could be dangerous.

Several legends circulate about treacherous innkeepers renting a room to a forlorn and exhausted traveler only to murder him in his sleep and steal his possessions.

Burr Ferry also served as a central crossing point for cattlemen. The Beef Trail, or Beef Road, ran from Liberty, Texas to the Sabine River. After crossing the Sabine, one branch went to Alexandria, Louisiana, and the other to Natchitoches, Louisiana.

Cattle drovers and traders used The Beef Trail to move goods from the woods and prairies of Texas to larger markets, like Alexandria or Opelousas, where cattle could be sold and shipped to New Orleans, and from there, to any place in the world. The road through Burr Ferry was one of many local paths that constituted the Beef Trail. Countless hooves and boots have traveled this road. Even though the road is no longer used as a major throughway into Texas, for a time every traveler into Texas knew of Burr Ferry.

Burr Ferry’s historical importance can be seen in its connection to Nolan Trace. This historic route earned its name because it follows the same route of adventurer and pathfinder Philip Nolan. Nolan blazed a trail from Louisiana to Texas, and highway LA 8 that runs through Burr Ferry is commonly known as Nolan’s Trace.

Prior to his adventures in Texas and no Man’s Land, Philip Nolan served as a shipping clerk for General James Wilkinson. Wilkinson had interests in New Spain, and his interest may have triggered Nolan’s westward journeys.

Using his connections, Nolan quickly secured rights from Spain and American to trade with Texas and to travel into the Spanish possession. Nolan made four major expeditions into Texas between 1791 and 1800, but Spanish officials began to suspect he was little more than a smuggler and a spy, trying to incite Indians to rebel.

In October 1800, Nolan left Nachez en route to Texas, he carried no official documents granting him passage into Texas. Spanish officials sent troops from... ...killed and his men were taken prisoner. (Marker Number 1.)

Other nearby markers. At least 3 other markers are within 11 miles of this marker, measured as the crow flies. Burr's Ferry Earthworks (within shouting distance of this marker); Site of Old Burr’s Ferry (approx. ¾ mile away in Texas); Cade Building (approx. 10.4 miles away in Texas).