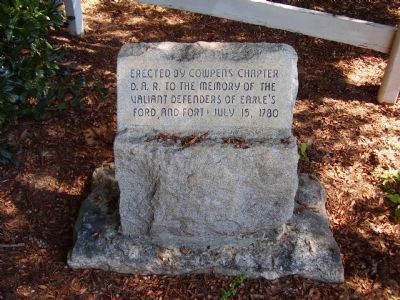 Erected By Cowpens Chapter D.A.R. to the Memory of The Valiant Defenders of Earle's Ford and Fort • July 15, 1780

Erected by Cowpens Chapter, National Society Daughters of the Revolution.

Topics. This historical marker is listed in these topic lists: Forts and Castles • Landmarks • Notable Events • War, US Revolutionary. A significant historical month for this entry is July 1943. 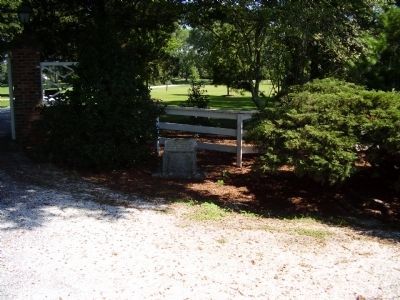 Additional commentary.
1. About Earle's Ford
Loyalist Colonel Zacharias Gibbs had learned that there was a Patriot force in the area (made up of the troops at McDowell's camp on the Pacolet River), and he sent Alexander Chesney to infiltrate the camp. Chesney wrote that he wanted to "learn their numbers, their commanders names, what carriages they had, how many horse and foot, and whenever they made any movement towards Col. Ferguson, to return and let him know, and there would be a handsome reward."

Chesney "set out immediately and at Pacolet got a man to go with me, who was acquainted 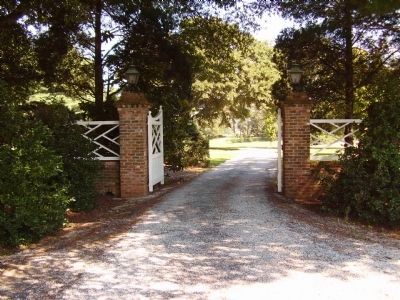 Photographed By Stanley and Terrie Howard, September 4, 2008
3. Four Columns Farm
This is the Entrance to the Four Columns Farm. Marker is sitting on right side of entrance.
with the North Carolina people; we went down to McDole's camp at night without being noticed, counted all their tents and wagons, found out who were their leaders, and that 500 horsemen were gone down to attack Nicholas's Fort. With this news I returned, and on my way found a loyalist in whom I could confide and sent him with the particulars by one route to Col. Ferguson whilst I went by another." Captain James Dunlap rode to attack McDowell's camp without knowing that Jones' forces had joined McDowell's.

Early in the morning of July 15 Dunlap discovered the camp and began moving across the North Pacolet River to attack. A lone sentry saw them and ran back to warn the camp. Dunlap rushed into the camp with sabers drawn, and surprised Jones' men still sleeping in their blankets. Jones' men received the bulk of the attack, and he lost two killed and six wounded. Jones received eights cuts on the head with a saber. Lt. Freeman rallied the men and moved them back to join Maj. Singleton behind a rail fence.

Cols. McDowell and Hampton formed the rest of the militia on Singleton's right, and ordered a charge into the Loyalists. Dunlap quickly retreated. In the counterattack McDowell lost six men killed and eighteen wounded.

One of the dead was Hampton's son, Noah. When the Loyalists has him sleeping in the camp, they asked him his name. He said "Hampton." The Loyalists were enraged by the name of the family who had done so much damage to their cause, and ran a bayonet through him. When the Patriots learned of this atrocity they demanded revenge. McDowell picked out fifty-two men from the two commands, and sent them with Cap. Edward Hampton to pursue the Loyalists.

Five miles from the fort Hampton caught Dunlap and his dragoons on the Blackstock Road, and attacked. Dunlap's men had been riding quietly and were unaware of their pursuers, when a volley of rifle fire tore into their ranks, killing five men. The Loyalists broke and fled to Prince's Fort, with Hampton's men hot on their heels. They made it to the fort, but only after they lost thirteen men killed and one captured.