Lewis and Clark on the Columbia 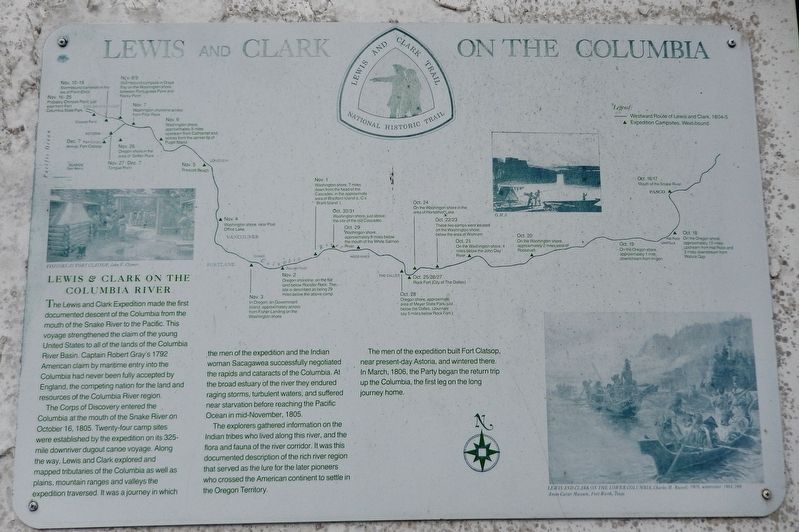 Lewis & Clark on the Columbia River

The Lewis and Clark Expedition made the first documented descent of the Columbia from the mouth of the Snake River to the Pacific. This voyage strengthened the claim of the young United States to all of the lands of the Columbia River Basin. Captain Robert Gray's 1792 American claim by maritime entry into the Columbia had never been fully accepted by England, the competing nation for the land and resources of the Columbia River region.

The Corps of Discovery entered the Columbia at the mouth of the Snake River on October 16, 1805. Twenty-four camp sites were established by the expedition on its 325-mile downriver dugout canoe voyage. Along the way, Lewis and Clark explored and mapped tributaries of the Columbia as well as plains, mountain ranges and valleys the expedition traversed. It was a journey in which the men of the expedition and the Indian woman Sacagawea successfully negotiated the rapids and cataracts of the Columbia. At the broad estuary of the river they endured raging storms, turbulent waters, and suffered near starvation before reaching the Pacific 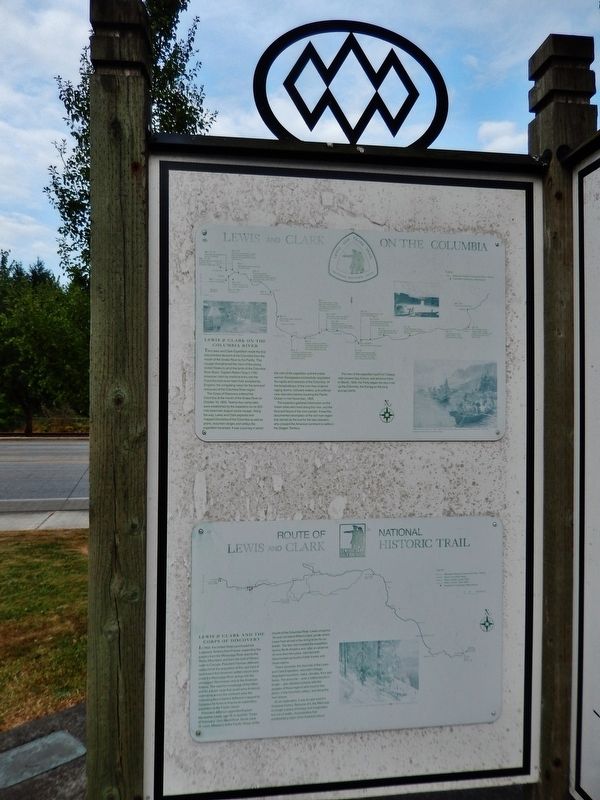 By Cosmos Mariner, July 10, 2015
2. Lewis and Clark on the Columbia Marker (tall view; showing related marker below)
Ocean in mid-November, 1805.

The explorers gathered information on the Indian tribes who lived along this river, and the flora and fauna of the river corridor. It was this documented description of the rich river region that served as the lure for the later pioneers who crossed the American continent to settle in the Oregon Territory.

The men of the expedition built Fort Clatsop, near present-day Astoria, and wintered there. In March, 1806, the Party began the return trip up the Columbia, the first leg on the long journey home.

Topics and series. This historical marker is listed in these topic lists: Exploration • Native Americans • Waterways & Vessels. In addition, it is included in the Lewis & Clark Expedition series list.

Location. 45° 44.897′ N, 122° 52.648′ W. Marker is in Scappoose, Oregon, in Columbia County. Marker is at the intersection of Columbia River Highway (U.S. 30) and SW Old Portland Road, on the left when traveling north on Columbia River Highway. Marker is located in a small plaza on the west side of the highway, across the highway from Scappoose High School. Touch for map. Marker is at or near this postal address: 51891 SW Old Portland Road, Scappoose OR 97056, United States of America. Touch for directions. 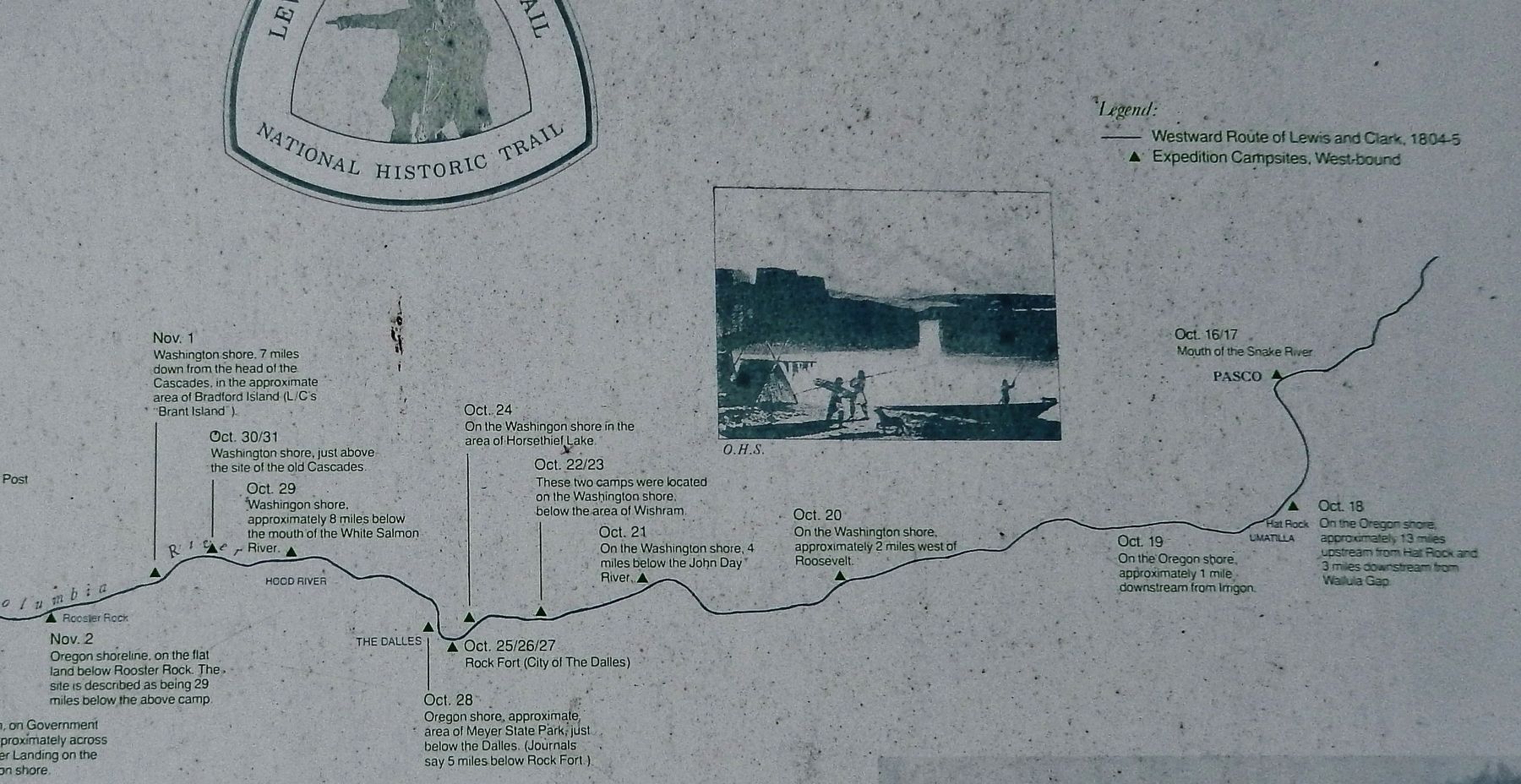 Also see . . .
1. Lewis and Clark Expedition reaches the Pacific Ocean on November 15, 1805.
On November 15, 1805, Lewis and Clark and the Corps of Volunteers for Northwestern Discovery reach the Pacific Ocean at the mouth of the Columbia River, one year, six months, and one day after leaving St. Louis, Missouri, in search of the legendary "Northwest Passage" to the sea. By the time they arrived at the ocean, Lewis and Clark knew that the Northwest Passage did not exist. Even if it had been possible to carry a canoe from the headwaters of the Missouri (in present-day Montana) and slide it into the nearest tributary of the Columbia, western rivers were not the slow, smooth waterways of the East. On the upper Missouri and on the Columbia, 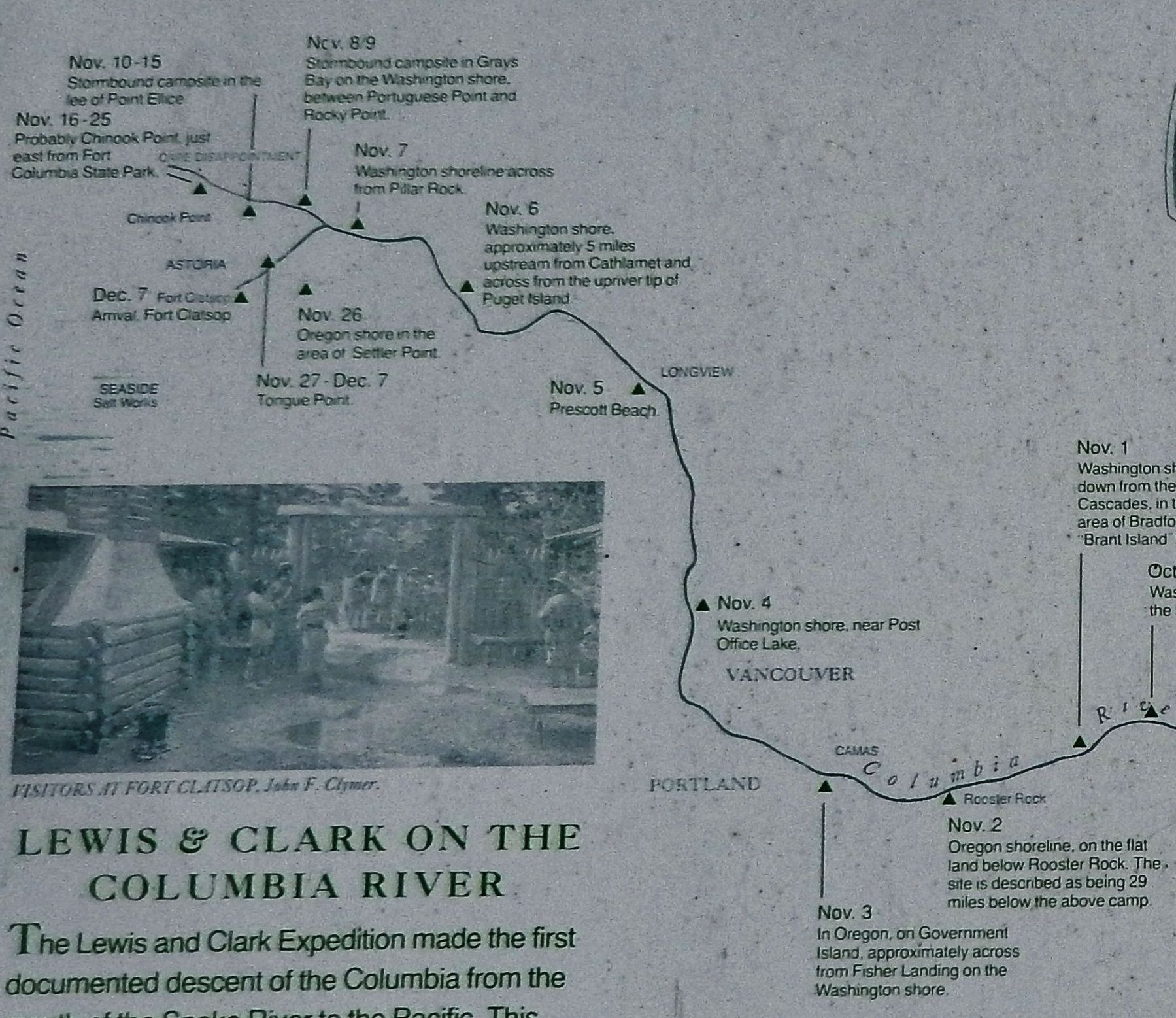 By Cosmos Mariner, July 10, 2015
4. Marker detail: November 1805 Campsites along the Columbia
the explorers faced rapids and cataracts that were bigger, swifter, and more dangerous than anything they had ever experienced. (Submitted on January 22, 2018, by Cosmos Mariner of Cape Canaveral, Florida.)