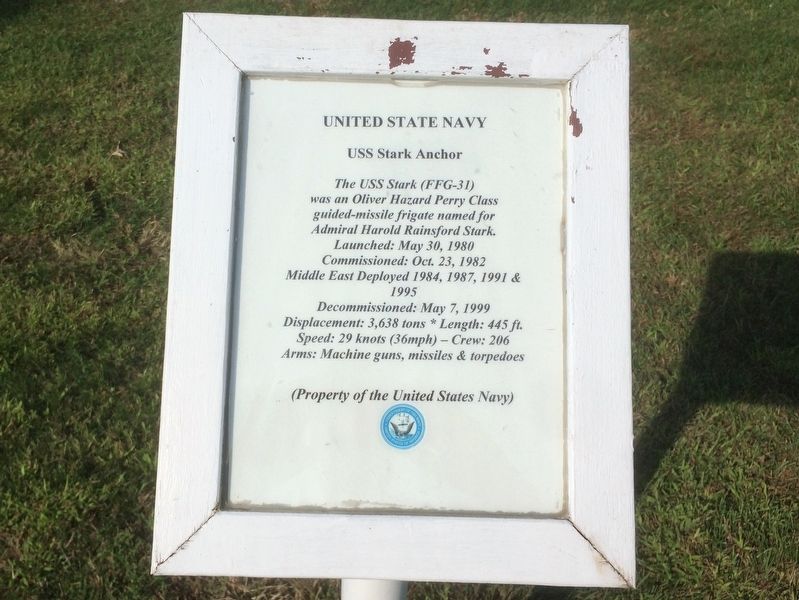 (Property of the United States Navy)

Topics. This historical marker is listed in these topic lists: War, 1st Iraq & Desert Storm • Waterways & Vessels. A significant historical date for this entry is May 17, 1987. 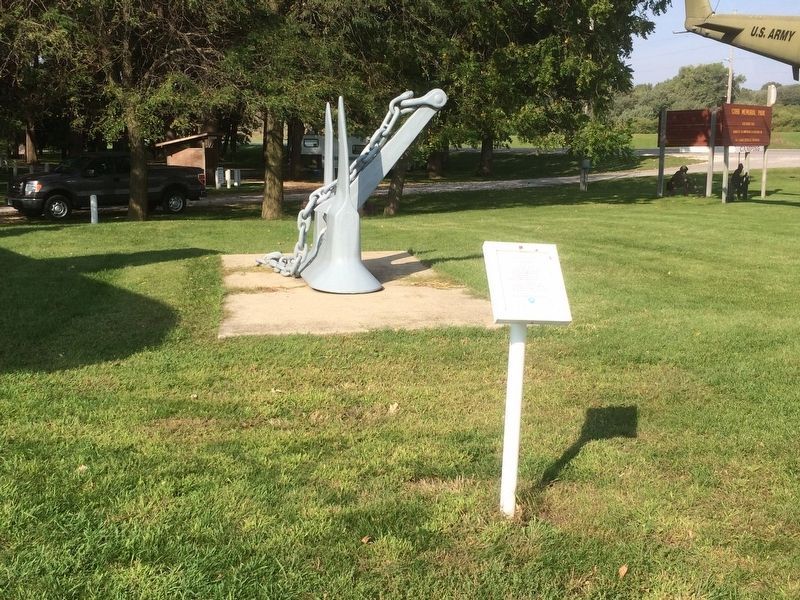 Click or scan to see
this page online
(within shouting distance of this marker); Holstein Freedom Rock Veterans Memorial (approx. 9.1 miles away).

Also see . . .  USS Stark incident (Wikipedia). "The USS Stark incident occurred during the Iran–Iraq War on 17 May, 1987, when an Iraqi jet aircraft fired missiles at the American frigate USS Stark. Thirty-seven United States Navy personnel were killed and twenty-one were injured...Stark arrived at Bahrain the following day, 18 May 1987, under her own power. There she was temporarily repaired by the destroyer tender USS Acadia before setting a course for Mayport Naval Station, Florida, the ship's home port. A court of inquiry under Rear Admiral Grant Sharp was formed to investigate the incident and later Captain Brindel was recommended for court-martial. It was found that Stark was 2 miles (3.2 km) outside the exclusion zone and had not violated neutrality as the Iraqis claimed. Iraq apologized, and Saddam Hussein said that the pilot mistook Stark for an Iranian tanker. American officials claimed that the Iraqi jet's pilot was not acting under orders from his government and that he was later executed. This has been disputed, as an Iraqi Air Force officer later stated that the pilot was not punished and that he was still alive....Washington used the incident to pressure Iran, which it later blamed for the whole situation. President Reagan said "We’ve never considered them [Iraq's military] hostile at all", and "the villain in the piece is Iran"....Ironically, the Pentagon said that an Iranian helicopter had joined a Saudi Arabian vessel in rescue operations. Furthermore, the Joint Chiefs of Staff investigation into the incident recommended that Iraq be held accountable, a finding the government of Iraq eventually complied with....Captain Brindel was relieved of duty and retired for not defending his ship and Tactical Action Officer Lieutenant Basil E. Moncrief resigned." (Submitted on January 27, 2018.)
Credits. This page was last revised on January 27, 2018. It was originally submitted on January 27, 2018, by Ruth VanSteenwyk of Aberdeen, South Dakota. This page has been viewed 205 times since then and 33 times this year. Photos:   1, 2. submitted on January 27, 2018, by Ruth VanSteenwyk of Aberdeen, South Dakota. • Andrew Ruppenstein was the editor who published this page.
Share this page.