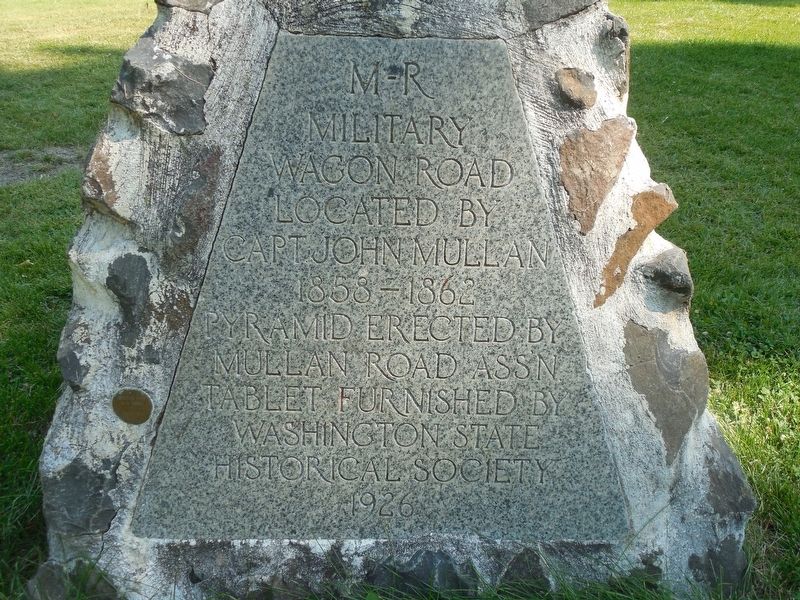 Location. 46° 35.746′ N, 118° 13.155′ W. Marker is in Starbuck, Washington, in Columbia County. Marker can be reached from Washington State Highway 261 (U.S. 261). Marker is just east of the bathrooms at Lyons Ferry Park, next to the Drewyers River Lewis & Clark historical marker. Touch for map. Marker is in this post office area: Starbuck WA 99359, United States of America. Touch for directions.

Also see . . .  Mullan Road (Wikipedia). Mullan Road was the first wagon road to cross the Rocky Mountains to the Inland of the Pacific Northwest. It was built by U.S. Army troops under the command of Lt. John Mullan, between the spring of 1859 and summer 1860. It led from Fort Benton, which at the time was in the Dakota Territory, then Idaho Territory from July 1863, and Montana Territory beginning in May 1864, and the navigational head of the Missouri River (and once farthest inland port in the world). The road connected to Fort Walla Walla, Washington Territory, near the Columbia River. The road previewed the route approximately followed of modern-day Interstate 15 and Interstate 90 through present-day Montana, Idaho, and Washington....The portion of Mullan Road south of SR 26 in Washington, which follows the course of the Palouse River as it descends to the Snake River, has been reverted to grazing and is not accessible to the public. After crossing the Snake River near the confluence with the Palouse River, the Mullan Road continues south along the Fort Walla Walla Fort Colville Military Road to its terminus at Fort Walla Walla near Walla Walla. (Submitted on January 29, 2018.)
Credits. This page was last revised on January 29, 2018. It was originally submitted on January 28, 2018, by Martin Schrattenholzer of Renton, Washington. This page has been viewed 98 times since then and 15 times this year. Photo   1. submitted on January 28, 2018, by Martin Schrattenholzer of Renton, Washington. • Andrew Ruppenstein was the editor who published this page.
Share This Page.