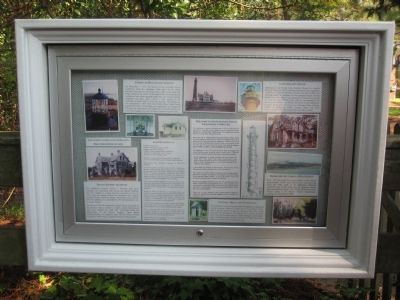 On December 1, 1875, the beacon of the Currituck Beach Lighthouse filled the remaining "dark spot" on the North Carolina coast between the Cape Henry light to the north and Bodie Island to the south. To distinguish the Currituck Beach Lighthouse from the other regional lighthouses, its exterior remains unpainted and today gives visitors a clear picture of the multitude of bricks used to form the structure. The lighthouse was automated in 1939 when the United State Coast Guard assumed the duties of the Bureau of Lighthouses. At a height of 158 feet, the night beacon still flashes at 20-second intervals to warn ships hugging the chain of barrier islands along the coast.

The Lighthouse Keepers' House, a victorian stick style dwelling, was constructed from pre-cut and labeled materials that were shipped on a barge and then assembled on site. In 1876, when the Keepers' House was completed, three keepers and their families shared the duplex. The keepers were removed after the Lighthouse was 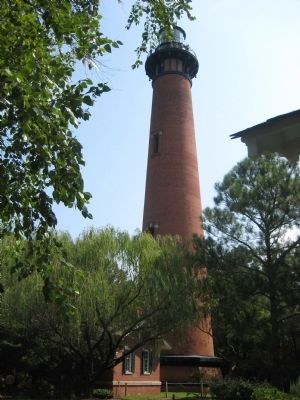 By F. Robby, August 11, 2008
2. Currituck Beach Light Station
automated in 1939 and attendants were no longer needed.

By the late 1970s, the Lighthouse Keepers' House stood open to the elements with no windows or doors; porches had decayed and vines invaded the north side. Concerned about the preservation of the historic property, Outer Banks Conservationists, Inc. signed a lease with the State of North Carolina in 1980 to begin a phased restoration of the property.

As i t had reported in previous years, the U.S. Light-House Board in 1872 stated that ships, cargoes and lives continued to be lost along the 40 miles of dark coastline that lay beyond the reaches of existing lighthouses. Southbound ships sailing closer to shore to avoid the Gulf Stream were expecially in danger. In response, construction began on the Currituck Beach Lighthouse in 1873 with completion two years later. 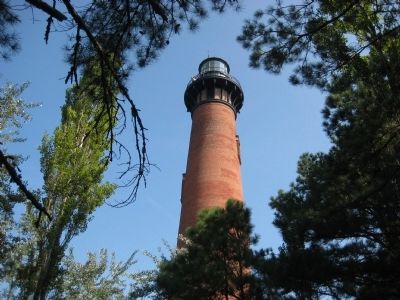 Before the advent of electricity, a mechanical means was required to rotate the huge lenses that made the light appear to flash. A system of weights suspended from a line powered a clockwork mechanism beneath the lantern - much like the workings of a grandfather clock. The keeper cranked the weights up by hand every two and a half hours.

Like th eother lighthouses on North Carolina's Outer Banks, the one still serves as an aid to navigation. The beacon comes on automatically every evening at dusk and ceases at dawn.

With a 20-second flash cycle (on for 3 seconds, off for 17 seconds), the light can be seen for 18 nautical miles. The distinctive sequence enables the lighthouse not only to warn mariners but also to help identify their locations.

The Currituck Beach Lighthouse was the last major brick lighthouse built on the Outer Banks.

The Lighthouse is open for climbing daily 9:00 a.m. until 5:00 p.m. (until 8 p.m. Thursdays in the summer) from the week before Easter through the weekend after Thanksgiving. 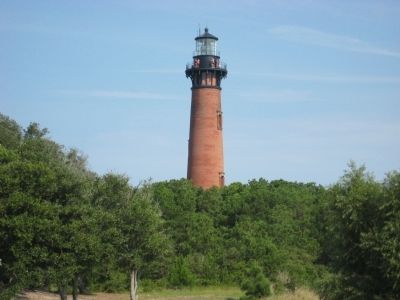 Please feel free to wander about the grounds during visitors' hours. For those hoping to climb the 214 stairs to the outside fallery, $7 a person will be collected inside the lighthouse. Childre seven years old and under are admitted free, but we ask that you sign in and note their age. We accept cash an checks. You must be eighteen years or older to climb - or be accompanied by an adult.

The lighthouse is over 130 years old and it does not comply with current building codes, structural codes or saftey codes. Therefore, you will be required to sign the following waiver before climbing:

We the undersigned do hereby indemnify and hold harmless the United State Coast Guard, Outer Banks Conservationss, their officers, agents and employees from all responsibility and liability for death or injury resulting from our visit to the Currituck Beach Lighthouse and Compound.

The weather on the Outer Banks is dramatic and can change quickly. Because of its height and exposure, the lighthouse may close during high winds and extreme weather. As you might expect, visitors will be asked to descend if there is a threat of lightning!

Finally, be thoughful of others as you visit. We ask that you not eat, smoke or drink while in the lighthouse tower. Also, remember your voice 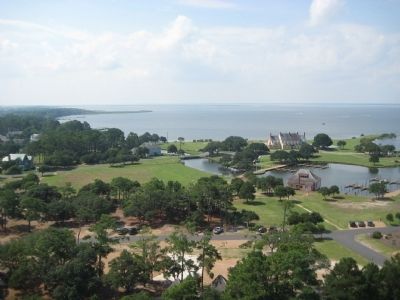 By F. Robby, August 11, 2008
5. View from the Top
Looking over Whalehead Club Park and Currituck Sound.
carries a considerable distance, both within the lighthouse itself and from its outside gallery to the surrounding neighborhood. Please help us be a good neighbor.

Thank you for your interest in the Currituck Beach Lighthouse Compound; whether you climb the lighthouse or not, we hope you enjoy your visit!

Other historic structures located within the lighthouse compound include louvered cisterns on either end of the Keepers' House and a cement cistern beside the Museum Shop that stored rainwater for th ekeepers. The interior of a restored two-hole privy near the Museum Shop is visible through a clear plastic door. A former storage building with its four sharp finials now serves as an office for the lighthouse staff.

Identical in style to the large Keepers' House is a smaller Keepers' House, an 1870's dwelling moved from the Long Point Lighthouse Station on Currituck Sound to this site in 1920. The dwelling served as residence for the principal keeper and his family until 1939, when it was abandoned. It became so covered by vines and brush that for many years no one realized it was there. It was rediscovered during restoration of the Lighthouse Keepers' House and now serves as a Museum Shop, offering models of lighthouses, books, pictures, shirts, and other lighthouse 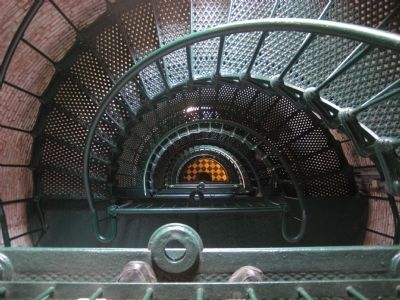 Where are the Corolla Wild Horses?

Since 1995 the horses have roamed freely in the wild on approximately 15,000 acres beyond the ocean-to-sound fence two miles north of the lighthouse. Although sometimes seen on the beach, they are generally elusive and prefer isolated settings. The Corolla Wild Horse Fund, located nearby in the Historic Corolla Schoolhouse, counted over 100 horses in 2006. 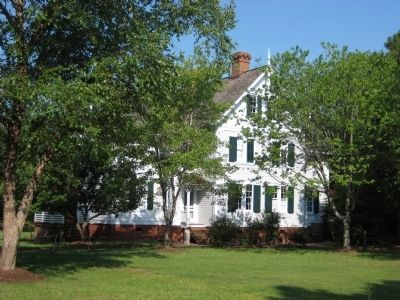 Related markers. Click here for a list of markers that are related to this marker. Currituck Beach Lighthouse 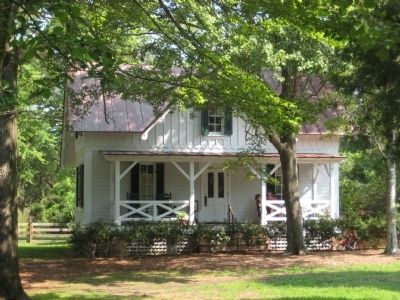 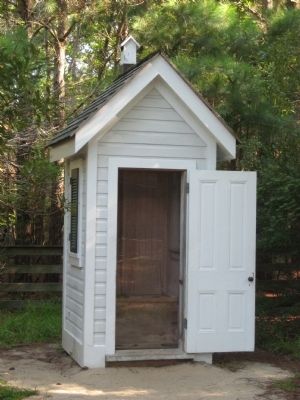