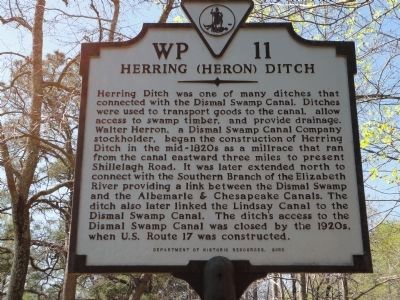 Photographed By Larry Hazelwood, April 3, 2011
1. Herring (Heron) Ditch Marker
Inscription.
Herring (Heron) Ditch. . , Herring Ditch was one of many ditches that connected with the Dismal Swamp Canal. Ditches were used to transport goods to the canal, allow access to swamp timber, and provide drainage. Walter Herron, a Dismal Swamp Canal Company stockholder, began the construction of Herring Ditch in the mid-1820s as a millrace that ran from the canal eastward three miles to present Shillelagh Road. It was later extended north to connect with the Southern Branch of the Elizabeth River providing a link between the Dismal Swamp and the Albemarle and Chesapeake Canals. The ditch also later linked the Lindsay Canal to the Dismal Swamp Canal. The ditch's access to the Dismal Swamp Canal was closed by the 1920s, when U.S. Route 17 was constructed. . This historical marker was erected in 2003 by Department of Historic Resources. It is in Chesapeake Virginia

Topics and series. This historical marker is listed in these topic lists: Bridges & Viaducts • Man-Made Features • Waterways & Vessels. In addition, it is included in the Virginia Department of Historic Resources series list. 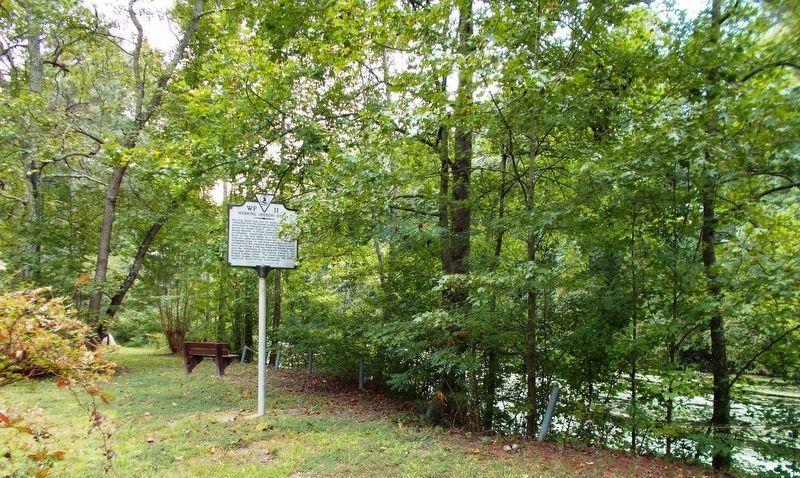 Click or scan to see
this page online
36° 40.875′ N, 76° 21.689′ W. Marker is in Chesapeake, Virginia. Marker is on Dismal Swamp Canal Trail, 0.8 miles south of George Washington Highway (U.S. 17), on the right when traveling south. The marker is located on what used to be old Rt 17. Touch for map. Marker is in this post office area: Chesapeake VA 23323, United States of America. Touch for directions.

More about this marker. Enter from the parking area at the entrance of the City of Chesapeake's Dismal Swamp Canal Trail. No motorized vehicles are allowed. Enter on foot, bicycle, or horseback.

Regarding Herring (Heron) Ditch. The marker refers to Walter Herron, a stockholder in the Dismal Swamp Canal company. His Grandson, Walter Herron Taylor, (b. June 13, 1838 - d. March 1, 1916) was a native of Norfolk, VA. He was a local banker, lawyer, soldier, politician, author, and railroad executive. During the War Between the States, he served as General Robert E. Lee's Aide-de-Camp. Today, the City of Norfolk has an elementary school named after him in Norfolk's West Ghent neighborhood. 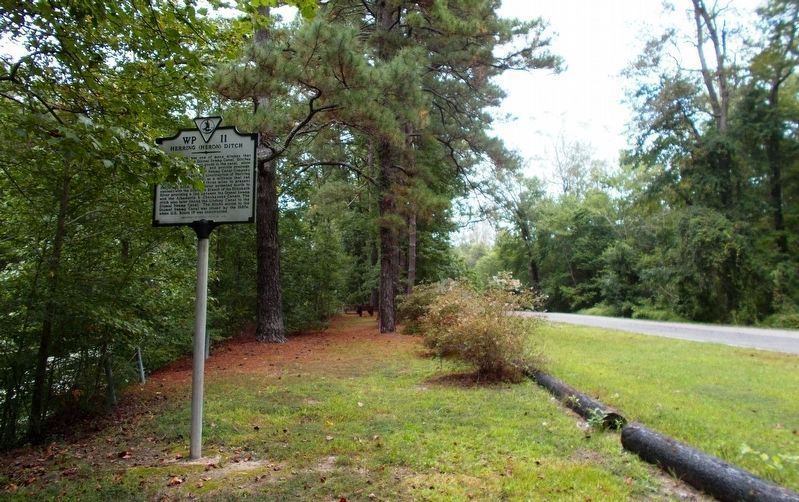 Photographed By Cynthia L. Clark, September 22, 2017
3. Herring (Heron) Ditch Marker, looking north.
A brownish wood bench and picnic table are pictured in the far center background.
Click here for a list of markers that are related to this marker. Dismal Swamp Canal 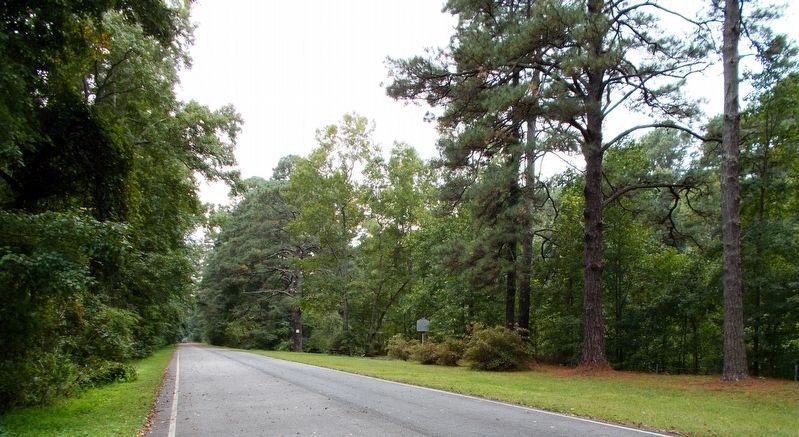 Photographed By Cynthia L. Clark, September 22, 2017
4. Herring (Heron) Ditch Marker, from afar.
In this southward view, the marker appears to hold a solitary position on a long alcove clearing along the Dismal Swamp Canal Trail. It catches the eye about midway of the first 1/4-mile and 1/2-mile markers.
Credits. This page was last revised on April 20, 2022. It was originally submitted on April 8, 2011, by Larry Hazelwood of Chesapeake, Virginia. This page has been viewed 1,457 times since then and 72 times this year. Last updated on March 1, 2018, by Cosmos Mariner of Cape Canaveral, Florida. Photos:   1. submitted on April 8, 2011, by Larry Hazelwood of Chesapeake, Virginia.   2, 3, 4. submitted on September 24, 2017, by Cynthia L. Clark of Suffolk, Virginia. • Bernard Fisher was the editor who published this page.
Share this page.