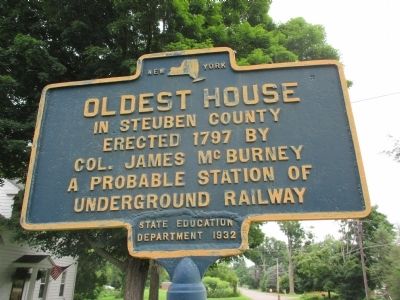 Location. 42° 17.219′ N, 77° 37.385′ W. Marker is in Hornellsville, New York, in Steuben County. Marker is at the intersection of McBurney Road and Magee Road on McBurney Road. Google maps shows the road as Dineen Road east of the intersection, but the U.S. Postal Service calls it McBurney Road. Locals think of the house as north of Canisteo, not as being in Hornellsville. While it is in the town of Hornellsville, that name, confusingly similar to the city of Hornell, whose borders are quite different, is only used in legal or real estate matters, never in conversation. Prior to creation of the Route 36 arterial about 1970, McBurney Road was NY 36, the main road between Canisteo and Hornell, the busiest road out of Canisteo, where a trolley line 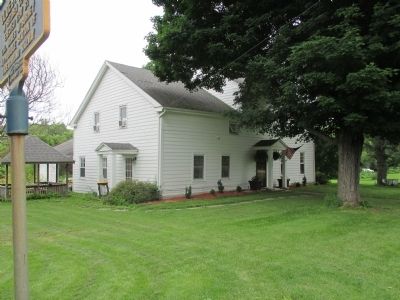 By Anton Schwarzmueller, July 20, 2014
2. Oldest House in Steuben County Marker
Edge of marker, west and south sides of house.
ran in the early twentieth century. Touch for map. Marker is at or near this postal address: 5872 McBurney Road, Hornell NY 14843, United States of America. Touch for directions. 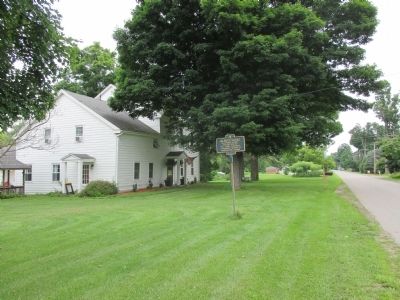 By Anton Schwarzmueller, July 20, 2014
3. Oldest House in Steuben County Marker
McBurney Road at right. This is looking east from the intersection with Magee Road. Magee Road is off of NY 36. 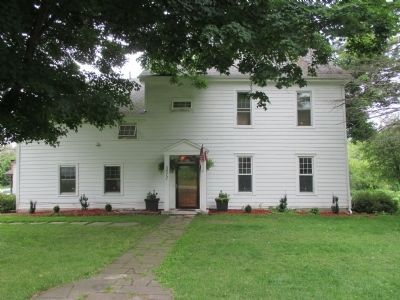 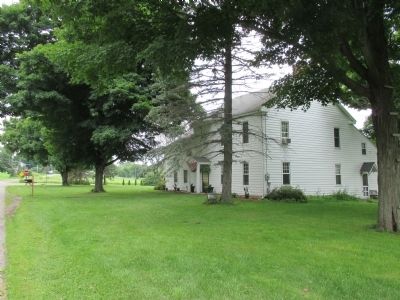