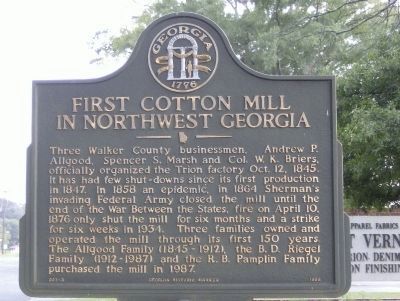 By David Tibbs, September 13, 2008
1. First Cotton Mill Historical Marker
Inscription.
First Cotton Mill In Northwest Georgia. . Three Walker County businessmen, Andrew P. Allgood, Spencer S. Marsh and Col. W.K. Briers, officially organized the Trion factory Oct. 12, 1845. It has had few shut-downs since its first production in 1847. In 1858 an epidemic, in 1864 Sherman's invading Federal Army closed the mill until the end of the War Between the States, fire on April 10, 1876 only shut the mill for six months and a strike for six weeks in 1934. Three families owned and operated the mill through its first 150 years. The Allgood Family (1845-1912), the B.D. Riegel Family (1912-1987) and the R.B. Pamplin Family purchased the mill in 1987. . This historical marker was erected in 1995. It is in Trion in Chattooga County Georgia

Topics and series. This historical marker is listed in these topic lists: Industry & Commerce • War, US Civil. In addition, it is included in the Georgia Historical Society series list. 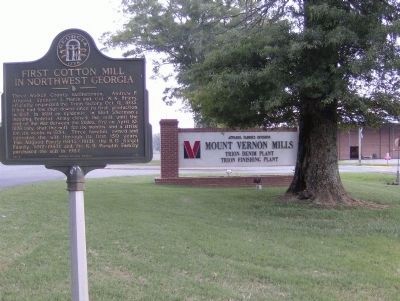 Also see . . .
1. Mount Vernon Mills History. This link is to the Mount Vernon Mills website. The site gives a history of the mills that A.P. Allgood founded. It is a good read and shows the intricate part A.P. Allgood and the mill played from the 1800's, through the War Between the States and into present day Trion. (Submitted on September 14, 2008, by David Tibbs of Resaca, Georgia.) 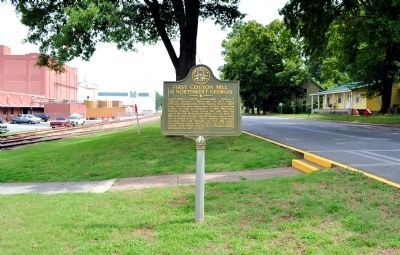 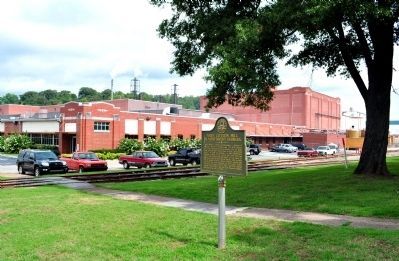 By David Seibert, July 15, 2012
4. First Cotton Mill In Northwest Georgia Marker
The marker with the mill office and mill in the background. 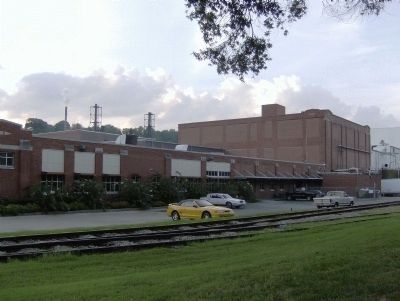 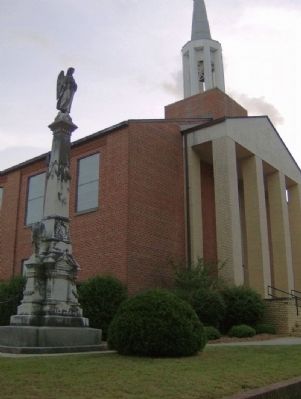 By David Tibbs, September 13, 2008
6. Allgood Monument and Church
This monument is dedicated to A.P. Allgood one of the people mentioned on the marker. It is located across town on Church Street in front of the First Baptist Church and reads: