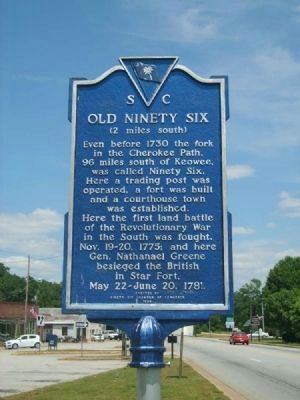 By Brian Scott, July 10, 2015
1. Old Ninety Six Marker
Inscription.
Old Ninety Six. (2 miles south). . Even before 1730 the fork in the Cherokee Path 96 miles south of Keowee, was called Ninety Six. Here a trading post was operated, a fort was built and a courthouse town was established. Here the first land battle of the Revolutionary War was fought, Nov. 19-20, 1775; and here Gen. Nathanael Greene besieged the British in Star Fort, May 22-June 20, 1781. . This historical marker was erected in 1959 by Ninety Six Chamber of Commerce. It is in Ninety Six in Greenwood County South Carolina

Even before 1730 the fork in the Cherokee Path 96 miles south of Keowee, was called Ninety Six. Here a trading post was operated, a fort was built and a courthouse town was established. Here the first land battle of the Revolutionary War was fought, Nov. 19-20, 1775; and here Gen. Nathanael Greene besieged the British in Star Fort, May 22-June 20, 1781.

Location. 34° 10.517′ N, 82° 1.392′ W. Marker is in Ninety Six, South Carolina, in Greenwood County. Marker is on Highway 246 South (State Highway 246), on the right when traveling west. Marker was located near the entrance to the Ninety Six Visitor's Center. The photo shown was taken during 2002. Touch for map. Marker is in this post office area: Ninety Six SC 29666, United States of America. Touch for directions.

Other nearby markers. At least 10 other markers are within 2 miles of this marker, measured as the crow flies. In Memoriam (approx. 0.2 miles away); M-60 A3 Main Battle Tank (approx. 0.2 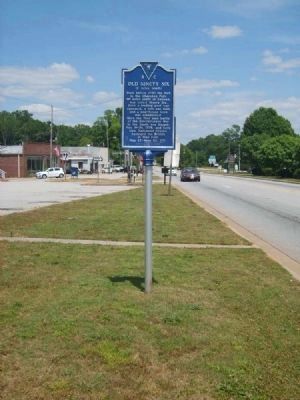 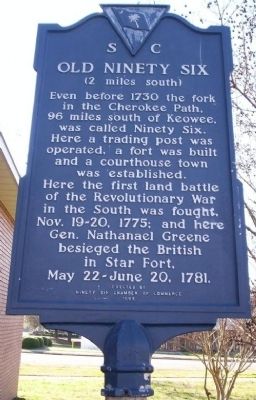 Additional comments.
1. Old Ninety Six and Star Fort
In Greenwood County is the site of the once-flourishing Colonial village of Ninety Six, renamed Cambridge after the Revolution. Even before 1730, the fork laying 96 miles south of the Cherokee Indian town of Keowee was an important place on the Cherokee Trail. Later the site of a frontier trading post and of Indian and Revolutionary War fortifications, Ninety Six was also a busy courthouse town, its gaol and courthouse described as brick buildings. It has also been described as a “snug village of 15 or 20 houses and stores.” As many as 17 stores were noted at one point…and the population included “4 merchants, as many lawyers, hotel keepers, tailor, blacksmith, carriage and harness shops, and three physicians…there was also belonging to the place [with] a large and well-selected library, and a flourishing academy…there was a church there…” 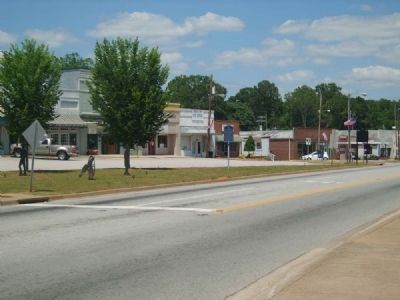 By Brian Scott, July 10, 2015
4. Old Ninety Six Marker
grant lying astride the Cherokee Path, which later ran through the center of town. Gouedy’s store was supposedly the largest above the fall line. Extant from this period is the grave of Gouedy’s son, James, in a wooded area south of Star Fort and perhaps near the site of the original Gouedy homeplace.

Gov. William Henry Lyttleton’s 1759 expedition built a fort around Gouedy’s barn, and this stockade, described as 90’ square, provided protection of settlers from a wide surrounding area.

First of the town’s Revolutionary fortifications was built in November 1775 at Colonel’s Savage’s plantation, or Savage’s Old Field. Separated from Ninety Six courthouse and gaol by a ravine and spring, this was a “temporary stockade fort of fence rails, straws, beeves’ hides and other such materials…a square of about 185 yards…the curtains of defense extended from a barn and store to some outhouses; and at a distance of 250 yards from the gaol.”

When the British occupied Ninety Six in 1780, they added fortifications to the existing stockade. Major defensive feature was a redoubt on the southeast tip of the village. This was Star Fort and it was surrounded by a ditch. Three cannon on wheels strengthened the earthwork fort from within. The entire village was surrounded by a stockade, and the gaol was fortified. Further strengthening was added by an embankment 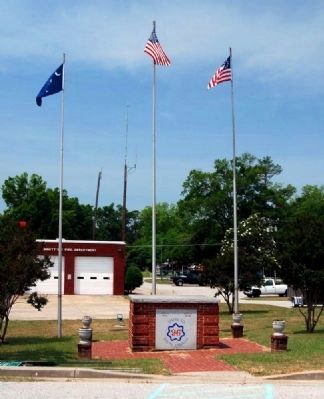 By Brian Scott, May 13, 2010
5. Ninety Six Centennial Time Capsule -
Base Reads:
Sept 6 1996 --- Sept 6 2096
Ninety Six,
South Carolina
of earth surrounding the village and by abates, a type of defense using felled trees with the branched ends sticking outward. Within the village, blockhouses were erected and covered ways built for safe communication. On the north side of the village a small stream supplied the garrison with water. A stockade fort with two blockhouses was built to defend the stream on the side opposite the village palisade. A covered way led to the stream between these two strong points. Added to the military engineering of the British was that of the besieging American forces: three parallels, two trenches, a mine reaching almost to the Star Fort ditch, [and] two log towers for firing into the fort.

The 1964 National Survey of Historic Sites and Buildings (Colonials and Patriots) describe Star Fort as “an earthwork with eight salients and right reentrant angles, enclosing about one-half acre northeast of the village.”

This same authority reports that “the Star Fort outlines are still readily discernible at earthwork embankments 4 or 5 feet high. Scattered brick fragments mark the location of the town, which was burned by the British, later rebuilt include the knoll on which the 1775 siege occurred and on which stood the British stockade fort of 1781, the ravine in which flowed the stream supplying water to the garrison, the jail site, the old Charleston Road, 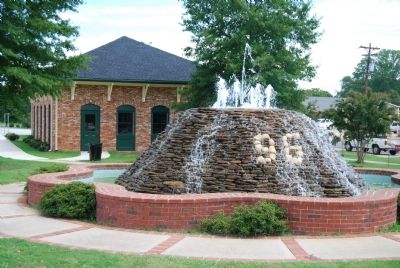 By Brian Scott, September 5, 2008
6. Ninety Six Fountain and Visitor's Center
and some distance from the village site, the 1759 fortification.

Significance
One of the oldest English place names in upper South Carolina, one this is significant in total South Carolina history and that has a bearing on U.S. history, Ninety Six was of prime importance in upcountry development of the state. Its early history reflects the activity, color, and romance of the typical frontier community of the Colonial era.

The importance of Ninety Six has three distinct phases:

1. As a trading and meeting junction in Colonial years, reflecting South Carolina’s Indian and frontier period. On George Hunter’s 1730 map of South Carolina’s northwest frontier, “96” appears as a special designation on the Cherokee Path, well-traveled pack trail to and from Charleston before 1700. (The original of this map is in the Library of Congress.) Its importance as a trading post is indicated in the 1738 Journal of the House of Assembly. And Gov. James Glen recognized its strategic location by choosing it for his 1746 Indian conference. (This colorful meeting was attended by the S.C. emperor of the Cherokees and 60 of his headmen accompanying the governor were 4 companies of troops and 200 additional gentlemen.)

2. As the northwestern area’s farthest English settlement from the coast, a thriving Colonial village from as early as 1740 and 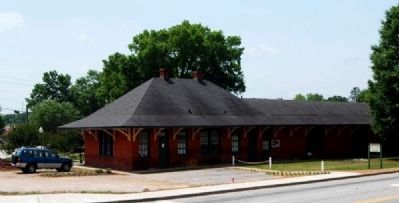 By Brian Scott, May 13, 2010
7. Ninety Six Depot -
Eastern Corner of S.C. 34 and S.C. 248
a busy courthouse town for the huge Ninety Six District from 1768 until shortly after 1800. After the 1768 Commons House of Assembly Bill establishing courts, building jails, appointing sheriffs, etc., the development of Ninety Six as a seat of government and justice was part of a significant South Carolina development – the growing importance of the state overall. Reflected here is the back country struggle for recognition and representation that led to such significance milestones as the establishment of a new capital city in mid-state, beginning in 1786.

During the Colonial period, Ninety Six was a key location in a number of historic expeditions:

a. Col. George Chicken’s 1715 journey inland during the Yemassee War. His journal possibly representing the first English account of a Carolina back country traveler and including the only mention of buffalo hereabouts (“we kill’d a boflow this day”).

b. Gov. Glen’s 1746 expedition to confer with the Cherokee.

c. Gov. Lyttleton’s 1759 expedition which built, en route, a stockade at Ninety Six that protected area settlers during the 1759-1761 Cherokee War. (In March 1760, the garrison withstood a 36-hour Cherokee attack.) Ninety Six also served as a supply center and base of operations for ranger and militia companies and from this time until the Revolution had numerous links with 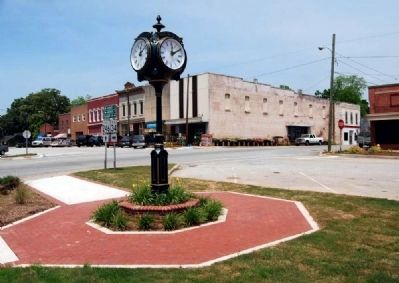 d. The 1775 mission to the back country by William Henry Drayton and the Rev. William Tennent sent from Charleston by the Council of Safety to explain the American-British disputes and to enlist patriot aid.

3. As a Revolutionary War Stronghold and also as a focal point of violent Patriot-Tory strife. Pre-Revolutionary activity included the raising of a Ranger troop in the Ninety Six area (June 1775) which made the first overt act of the Revolutionary War in South Carolina – the July 1775 seizure of Fort Charlotte from the British. Ranger commander was James Mayson, who lived near Ninety Six. In August 1775, Ninety Six District sent nine representatives to the Second Provincial Congress. One of these was Commander Mayson.

The Revolution’s first land battle south of New England took place at Ninety Six, Nov. 19-21, 1775. Patriot forces, besieged inconclusively, finally defeated and dispersed the Tories in December. In this battle, James Birmingham was the first South Carolina patriot to give up his life in the Revolution. Andrew Pickens, who later became one of South Carolina’s three famous partisan generals, was a company commander in this action.

Old Ninety Six reached the peak of its fame in 1780-1781 when it was a British garrison and scene of the siege of Star Fort, one of the most interesting 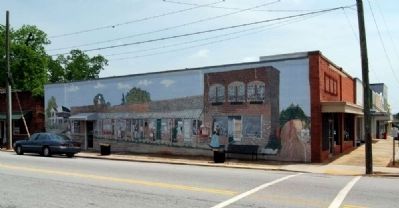 By Brian Scott, May 13, 2010
9. Murial of Pender Row, circa 1923
and spectacular operations of the Revolution’s closing months.

In 1779, the British returned to their earlier plan of trying to roll up the states from south to north, and after the 1780 capture of Charles Town, ordering three expeditions to the interior to gain control of the state. Ninety Six became important to the most advanced British post, supporting the other two posts, at Augusta and Camden, also covering loyalist settlements and serving as a recruiting depot for Tory fighters.

The Star Fort, built at this time, continued as a British outpost, manned by regulars and Tories, until May-June 1781, when Gen. Nathanael Greene’s American force invested and assaulted the fort. The siege was unsuccessful since the fort’s star form gave the enemy complete command and exposed the attackers to close cross-fire. Advancing British reinforcements spurred American withdrawal. The British, however, evacuated the fort at the end of the 27-day siege. This relinquishment of the inland South Carolina foothold helped weaken the south-to-north British offensive and was a contributing factor to the war’s outcome.

Associated with Old Ninety Six are such historically significant names as Patrick Calhoun (father of John C.), Andrew Pickens, and Se. John Lewis Gervais, who was instrumental in changing the state capital from Charleston.

In post-Revolutionary years, Ninety Six achieved some importance as a college town. Site of one of three colleges authorized by the S.C. General Assembly in March 1785, the town changed its name to Cambridge in 1787 in honor of the college. The institution enjoyed no lasting success, however, and by the mid-1820s, the once-flourishing town had almost ceased to exist.