Delivered Afloat in the Harbor 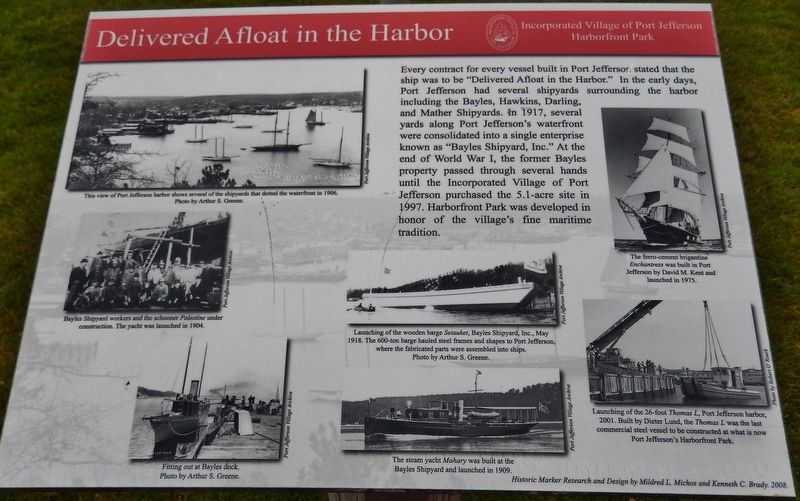 Every contract for every vessel built in Port Jefferson stated that the ship was to be "Delivered Afloat in the Harbor." In the early days, Port Jefferson had several shipyards surrounding the harbor including the Bayles, Hawkins, Darling, and Mather Shipyards. In 1917, several yards along Port Jefferson's waterfront were consolidated into a single enterprise known as "Bayles Shipyard, Inc." At the end of World War I, the former Bayles property passed through several hands until the Incorporated Village of Port Jefferson purchased the 5.1-acre site in 1997. Harborfront Park was developed in honor of the village's fine maritime tradition. Other nearby markers. At least 8 other markers are within 2 miles of this marker, measured as the crow flies. Well-Worn Ways (within shouting distance of this marker); The Anchor of Our Community (within shouting distance of this marker); Bayles Chandlery (about 500 feet away, measured in a direct line); "Bucket of Blood" (about 700 feet away); First Baptist Church of Port Jefferson (approx. ¼ mile away); Roe Tavern (approx. 1.7 miles away); Setauket School (approx. 2 miles away); Selah B. Strong - Kate Strong House (approx. 2 miles away). Touch for a list and map of all markers in Port Jefferson.

Also see . . .
1. Port Jefferson History.
Incorporated in 1963, Port Jefferson was originally called Drowned Meadow because the downtown area was tidal and "drowned" by the tide twice a day. Today’s Main Street was created when Capt. William L. Jones built a causeway across the 22 acre salt marsh in 1836. The marsh was then gradually filled in. Today’s Main Street was first called Jones Street. Its businesses supplemented the village’s shipbuilding industry which was the largest in Suffolk County. Four out of ten ships built in the county were constructed 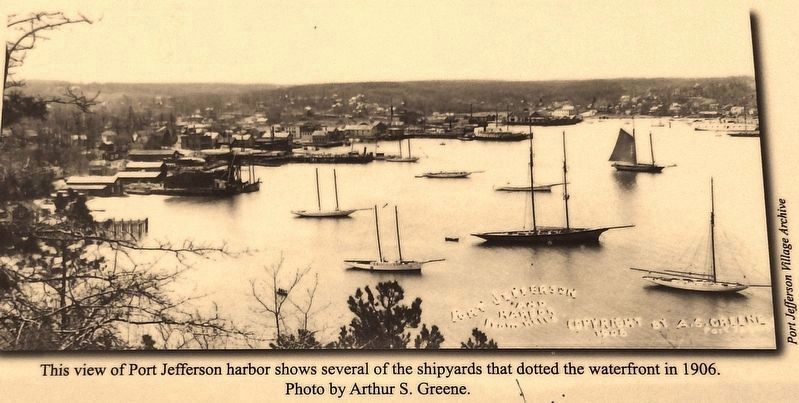 Arthur S. Greene, courtesy of the Port Jefferson Village Archive, 1906
3. Marker detail: Port Jefferson Harbor, 1906
here. The village was the home of coastal schooner captains, blue water sailors and seamen. Most families had at least one or two members building ships or at sea. (Submitted on March 8, 2018, by Cosmos Mariner of Cape Canaveral, Florida.)

2. The History of Port Jeff.
The Village’s shipbuilding industry spanned over a century, from approximately 1797 (when its first shipyard was built) to its close in the 1920’s. As a shipbuilding hub, Port Jefferson’s main role was to build and support ships that participated in coastal freighting trades. Well-known circus owner P.T. Barnum owned a segment of land running through the Village. He aimed to establish Port Jefferson as the home base for his circus, but would eventually sell his land after disapproving residents put a stop to his plans. (Submitted on March 8, 2018, by Cosmos Mariner of Cape Canaveral, Florida.) 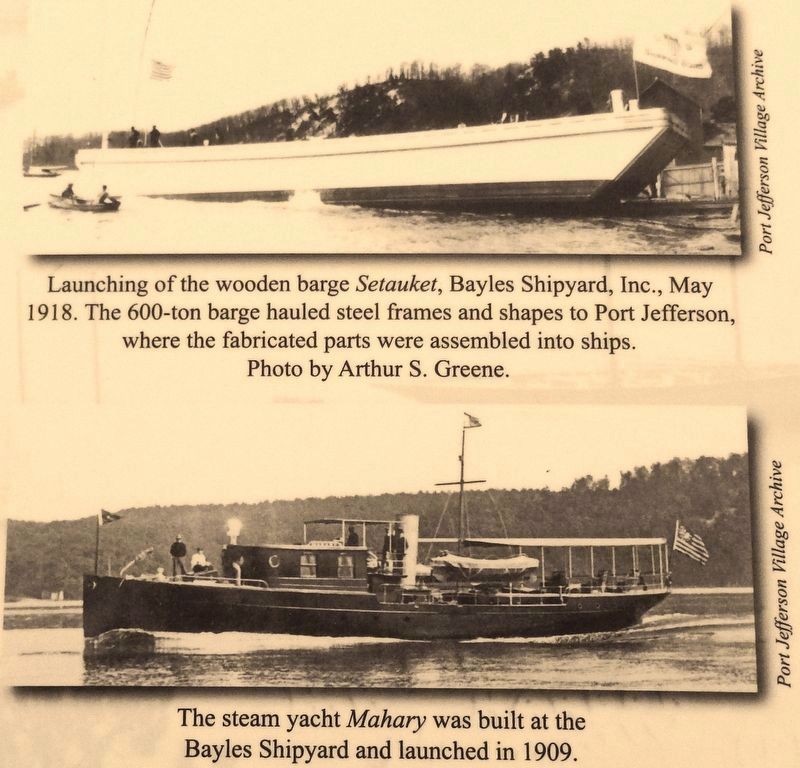 The steam yacht Mahary was built at the Bales Shipyard and launched in 1909. 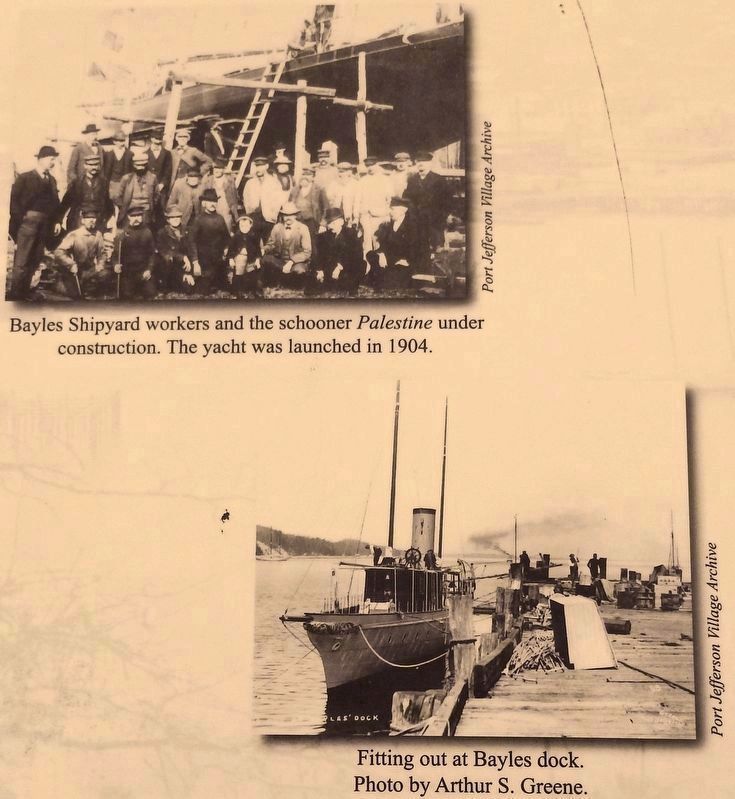 Fitting out at Bayles dock. 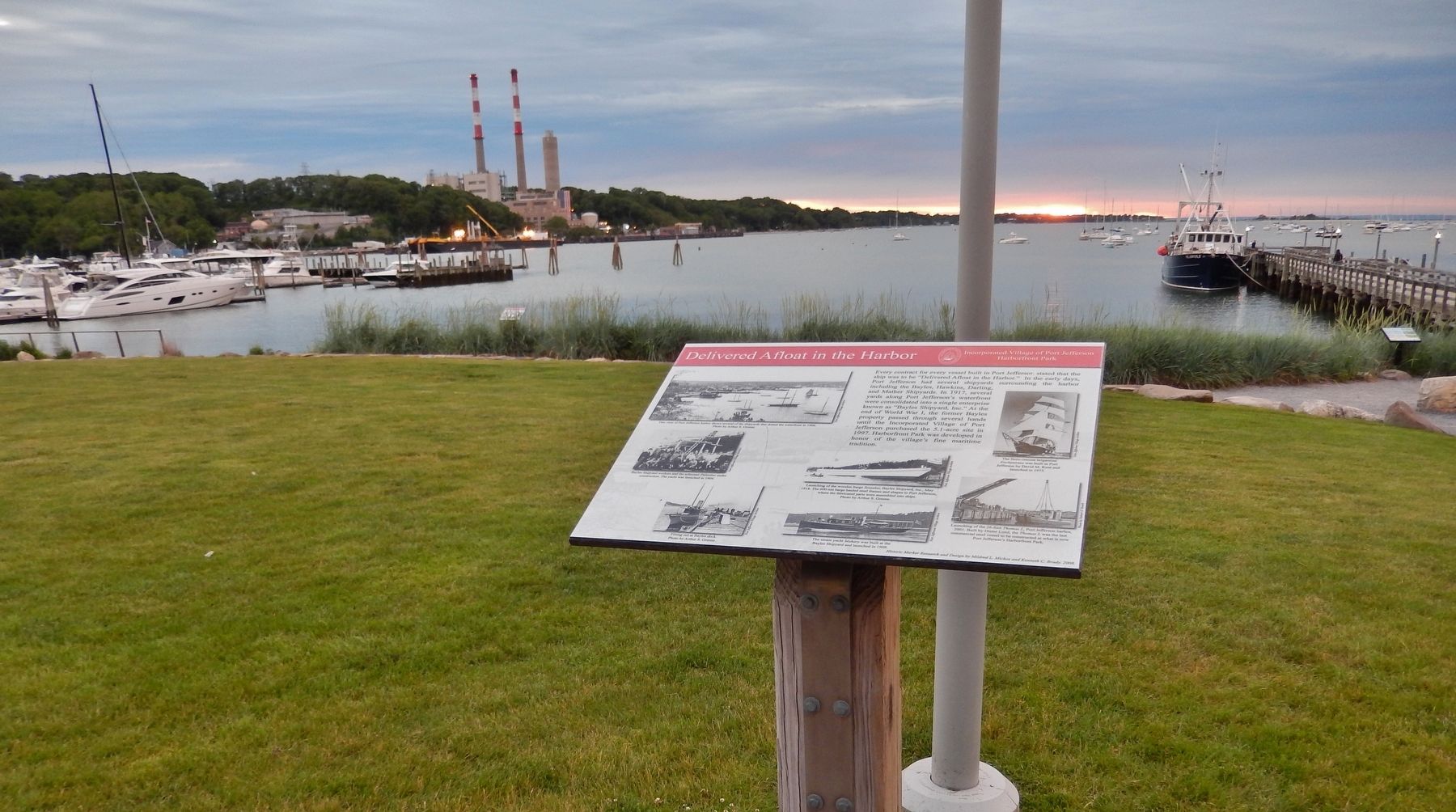