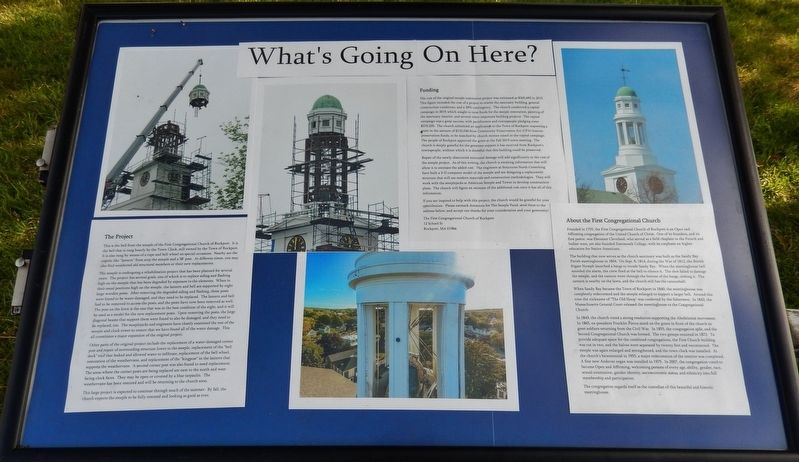 The Project
This is the bell from the steeple of the First Congregational Church of Rockport. It is the bell that is rung hourly by the Town Clock, still owned by the Town of Rockport. It is also rung by means of a rope and bell wheel on special occasions. Nearby are the cupola-like "lantern" from atop the steeple and a 38' post. At different times, you may also find weathered old structural members or their new replacements.

The steeple is undergoing a rehabilitation project that has been planned for several years. The project has several goals, one of which is to replace siding and flashing high on the steeple that has been degraded by exposure to the elements. When in their usual positions high on the steeple, the lantern and bell are supported by eight large wooden posts. After removing the degraded siding and flashing, these posts were found to be water damaged, and they need to be replaced. The lantern and bell had to be removed to access the posts, and the posts have now been removed as well. The post on the lawn is the one that was in the best condition of the eight, and it will be used as a model for the 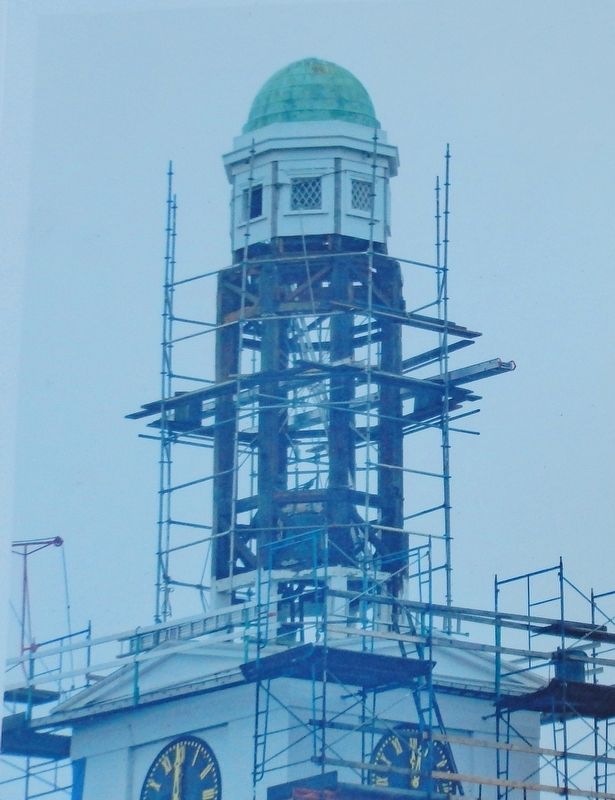 Click or scan to see
this page online
new replacement posts. Upon removing the posts, the large diagonal beams that support them were found to also be damaged, and they need to be replaced, too. The steeplejacks and engineers have closely examined the rest of the steeple and clock tower to ensure that we have found all of the water damage. This all constitutes a major expansion of the original project.

This large project is expected to continue through much of the summer. By fall, the church expects the steeple to be fully restored and looking as good as ever.

Funding
The cost of the original steeple restoration project was estimated as $265,692 in 2015. This figure included the cost of a project to rewire the sanctuary 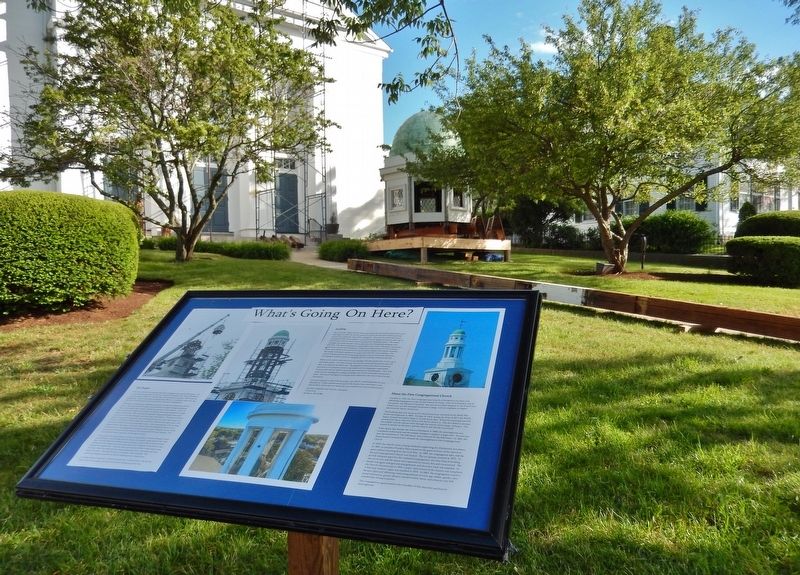 Photographed By Cosmos Mariner, June 23, 2017
3. First Congregational Church of Rockport Steeple Rehabilitation Marker (wide view)
building, general construction conditions, and a 20% contingency. The church conducted a capital campaign in 2015 which sought to raise funds for the steeple restoration, painting of the sanctuary interior, and several other important building projects. The capital campaign was a great success, with parishioners and townspeople pledging some $370,335. The church submitted an application to the Town of Rockport requesting a grant in the amount of $132,046 from Community Preservation Act (CPA) historic preservation funds, to be matched by church monies raised in the capital campaign. The people of Rockport approved the grant at the Fall 2015 town meeting. The church is deeply grateful for the generous support it has received from Rockport's townspeople, without which it is doubtful that this building could be preserved.

Repair of the newly-discovered structural damage will add significantly to the cost of the steeple project. As of this writing, the church is awaiting information that will allow it to estimate the added cost. The engineers at Structures North Consulting have built a 3-D computer model of the steeple and are designing a replacement structure that will use modern materials and construction methodologies. They will work with the steeplejacks at American Steeple and Tower to develop construction plans. The church will figure an estimate of the additional 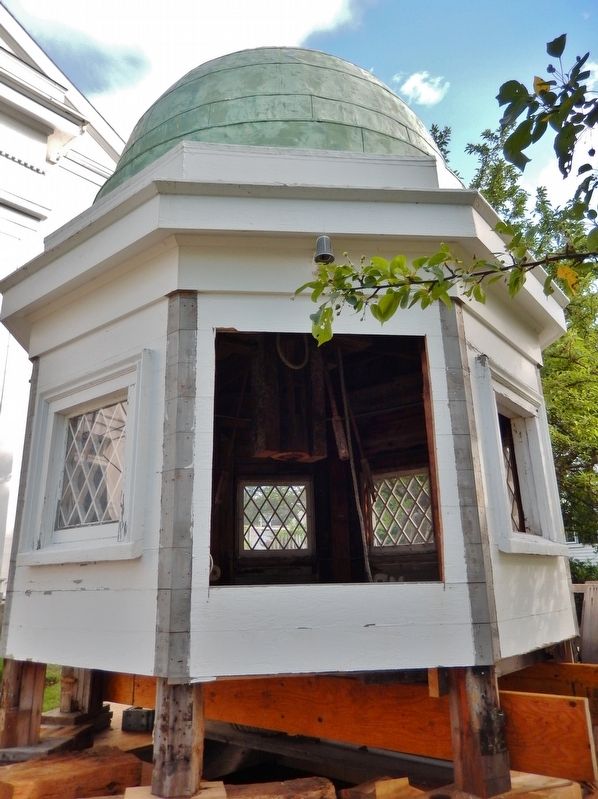 Photographed By Cosmos Mariner, June 23, 2017
4. First Congregational Church of Rockport Cupola
cost once it has all of this information.

About the First Congregational Church
Founded in 1755, the First Congregational Church of Rockport is an Open and Affirming congregation of the United Church of Christ. One of its founders, and its first pastor, was Ebenezer Cleveland, who served as a field chaplain in the French and Indian wars, yet also founded Dartmouth College, with its emphasis on higher education for Native Americans.

The building that now serves as the church sanctuary was built as the Sandy Bay Parish meetinghouse in 1804. On Sept. 8, 1814, during the War of 1812, the British frigate Nymph launched a barge to invade Sandy Bay. When the meetinghouse bell sounded the alarm, the crew fired at the bell to silence it. The shot failed to damage the steeple, and the cannon went through the bottom of the barge, sinking it. The cannon is nearby on the lawn, and the church still has the cannonball.

When Sandy Bay became the Town of Rockport in 1840, the meetinghouse was completely redecorated and the steeple enlarged to support a larger bell. Around this time the nickname of "The Old Sloop" was conferred by the fishermen. In 1842, the Massachusetts General Court released the meetinghouse to the Congregational Church.

In 1843, the church voted a strong resolution supporting the Abolitionist movement. In 1865, ex-president 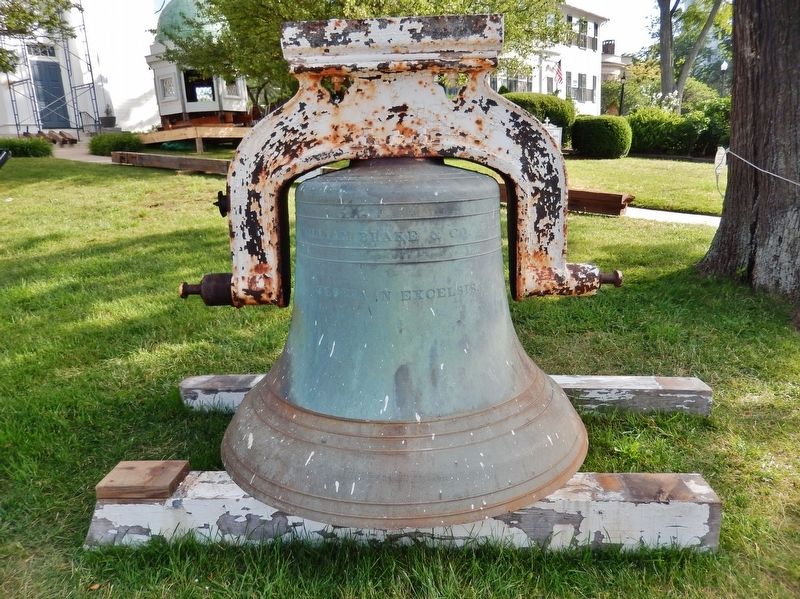 Photographed By Cosmos Mariner, June 23, 2017
5. First Congregational Church of Rockport Bell
Franklin Pierce stood on the green in front of the church to greet soldiers returning from the Civil War. In 1855, the congregation split, and the Second Congregational Church was formed. The two groups reunited in 1872. To provide adequate space for the combined congregations, the First Church building was cut in two, and the halves were separated by twenty feet and reconnected. The steeple was again enlarged and strengthened, and the town clock was installed. At the church's bicentennial in 1955, a major redecoration of the interior was completed. A fine new Andover organ was installed in 1975. In 2007, the congregation voted to become Open and Affirming, welcoming persons of every age, ability, gender, race, sexual orientation, gender identity, socioeconomic status, and ethnicity into full membership and participation. The congregation regards itself as the custodian of this beautiful and historic meetinghouse.

Topics and series. This historical marker is listed in these topic lists: Abolition & Underground RR • Churches & Religion • War of 1812. In addition, it is included in the Former U.S. Presidents: #14 Franklin Pierce series list. 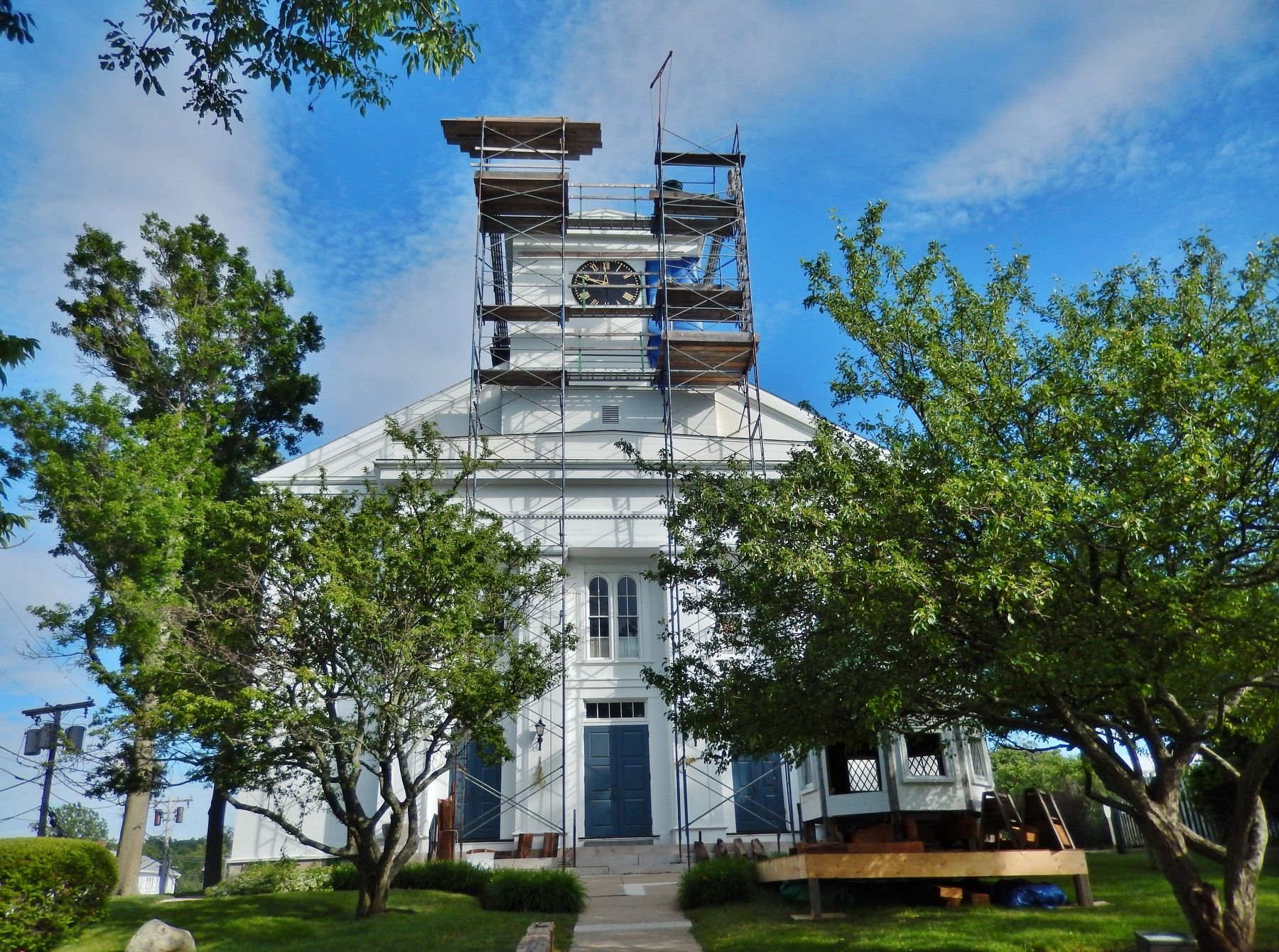 Photographed By Cosmos Mariner, June 23, 2017
6. First Congregational Church of Rockport Steeple Rehabilitation
W. Marker is in Rockport, Massachusetts, in Essex County. Marker is at the intersection of Main Street and School Street, on the left when traveling west on Main Street. Marker is located at the northeast corner of the church grounds, by the sidewalk, near the intersection. Touch for map. Marker is at or near this postal address: 22 Main Street, Rockport MA 01966, United States of America. Touch for directions. 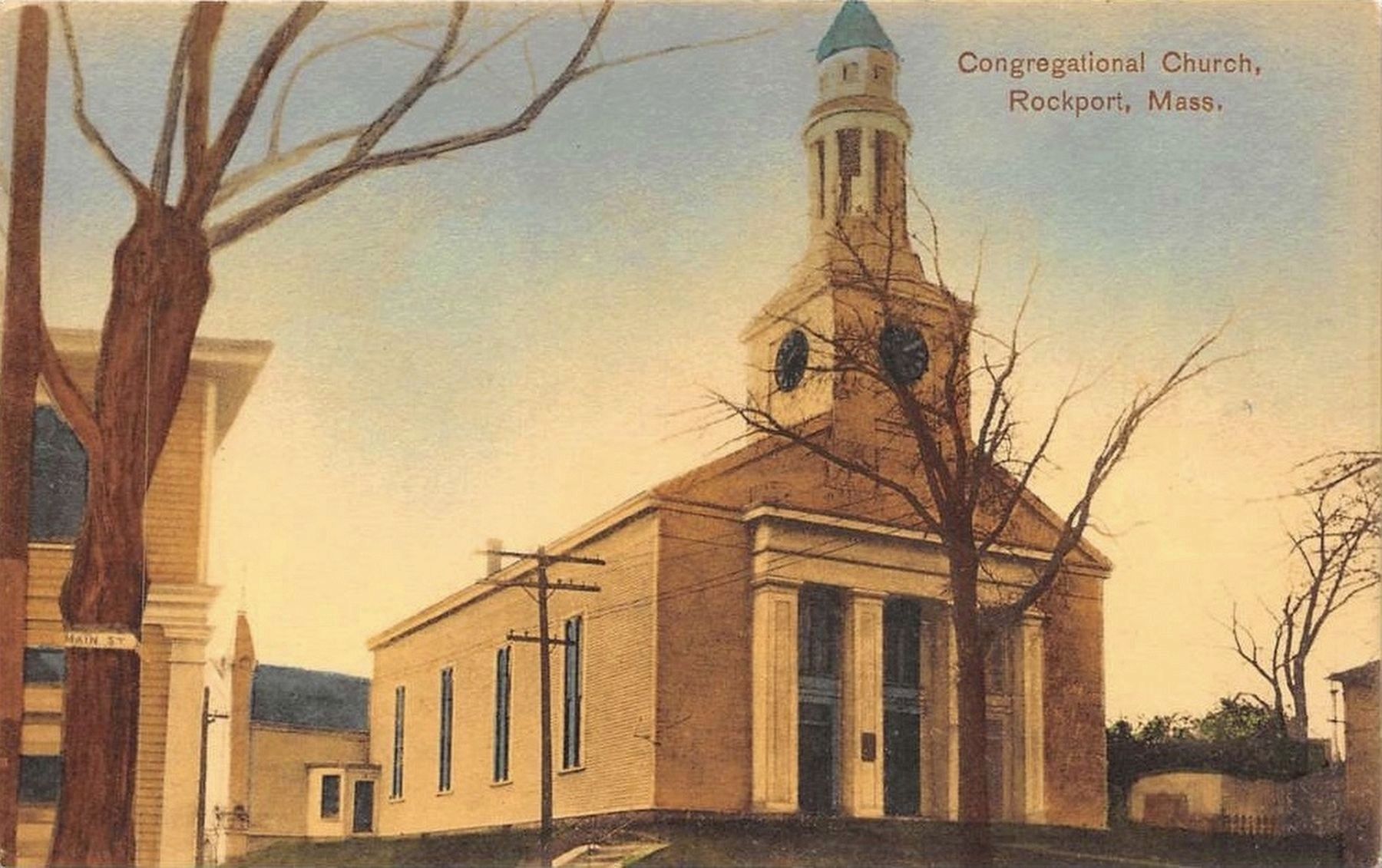