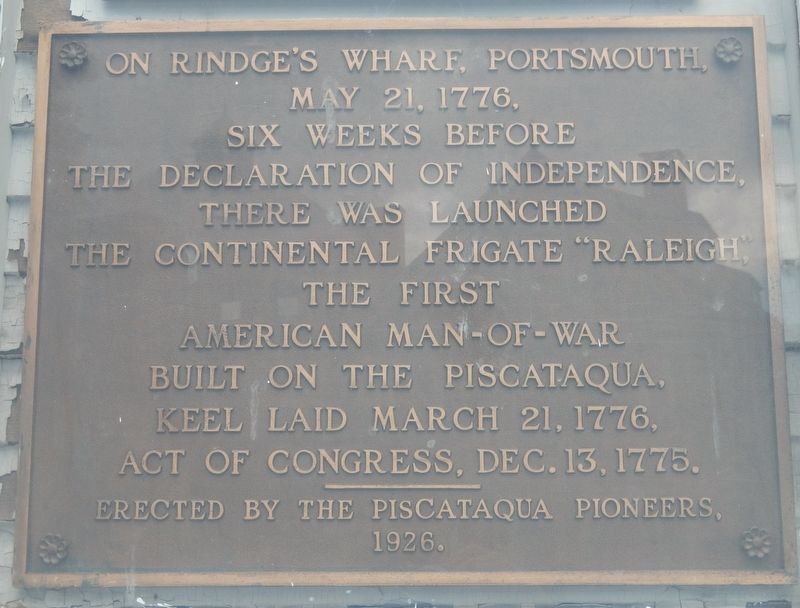 On Rindge’s Wharf, Portsmouth,
May 21, 1776,
six weeks before
The Declaration of Independence,
there was launched
The Continental Frigate “Raleigh,”
the First
American Man-of-War
built on the Piscataqua,
keel laid March 21, 1776,
Act of Congress, Dec. 13, 1775.

Location. 43° 4.51′ N, 70° 45.626′ W. Marker is in Portsmouth, New Hampshire, in Rockingham County. Marker is on Middle Street (U.S. 1) north of State Street, on the right when traveling north. Marker is a metal plaque mounted above eye level on the east side of the Historic John Paul Jones House, near the southeast corner of the house. Touch for map. Marker is at or near this postal address: 43 Middle Street, Portsmouth NH 03801, United States of America. Touch for directions.

Other nearby markers. At least 8 other markers are within walking distance of this marker. In This House Admiral (John) Paul Jones Resided (here, next to this marker); John Paul Jones House 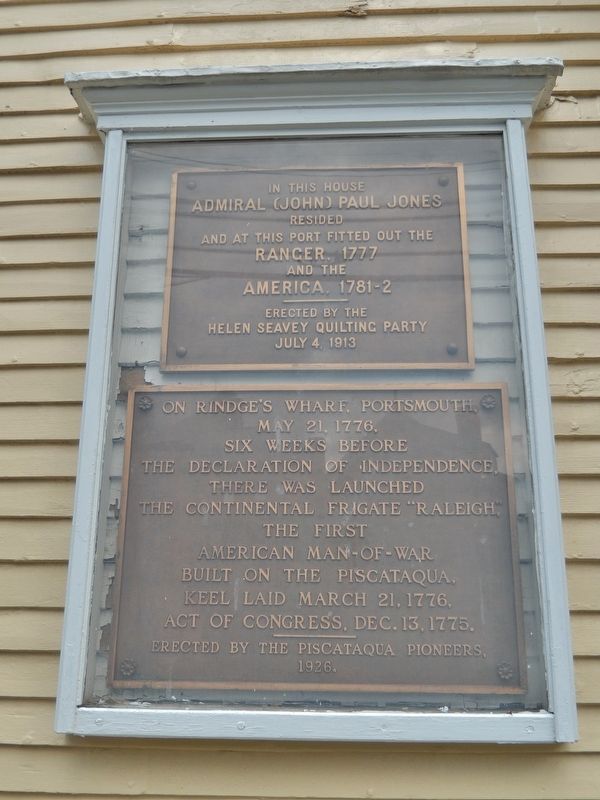 More about this marker. This marker and an unrelated marker are mounted on the wall, between a window and the southeast corner of the house, and protected by a frame holding a transparent plastic cover.

Also see . . .
1. Continental Frigate Raleigh (1775).
One of the Revolutionary War frigates, Raleigh was authorized by the Continental Congress in December, 1775, laid down in March of 1776 and launched in May of the same year, a remarkably short time for construction of a frigate. Designed and built by Hackett, Hill, and Paul at Portsmouth, NH, the Raleigh appears on the great seal of the state of New Hampshire. (Submitted on April 7, 2018, by Cosmos Mariner of Cape Canaveral, Florida.) 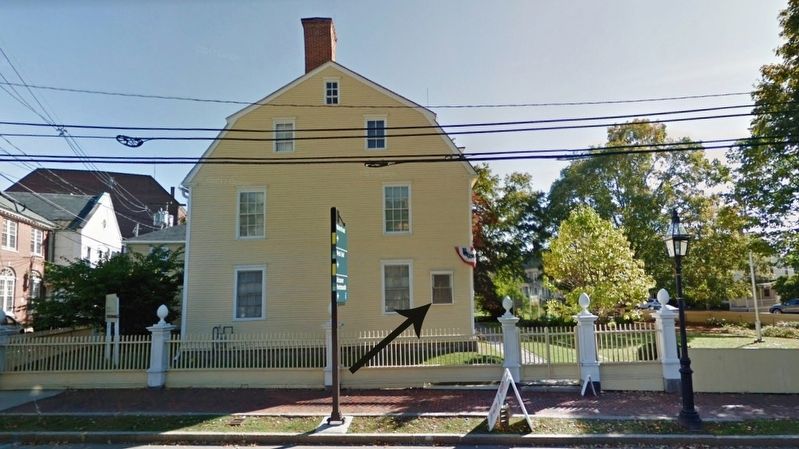 3. John Paul Jones House (east side; marker visible near corner at right)
Thomas Thompson was relieved of command due to his failure to stop the capture on March 9, 1778, of her companion. Captain John Barry assumed command on June 24 and brought the frigate to seaworthy status. On September 27, after a chase of nearly three days departing Boston, Raleigh was engaged by the Royal Navy ships Unicorn, Experiment, and Wallace. Run ashore during the engagement, she had to be abandoned at Wooden Ball Island, Matinicus Islands, and was captured. (Submitted on April 7, 2018, by Cosmos Mariner of Cape Canaveral, Florida.)

3. Frigates, Brigs, Sloops, Schooners, and the Early Continental Navy’s Struggle for Success.
In 1775, Americans were no strangers to the ways of the sea, either in peace or in war. In the years immediately before the outbreak of the rebellion, Americans demonstrated their growing disenchantment with British rule by taking action against ships collecting revenue or delivering tea in Boston Harbor. Once the revolution began, Americans recognized that events in the Atlantic Ocean theater would have a major, and potentially decisive, impact on the course of the war in North America. The USS Raleigh was one of thirteen ships that the Continental Congress authorized for the Continental Navy in 1775. Following her capture in 1778, she served in the Royal Navy as HBMS Raleigh. (Submitted on April 7, 2018, by Cosmos Mariner of Cape Canaveral, Florida.) 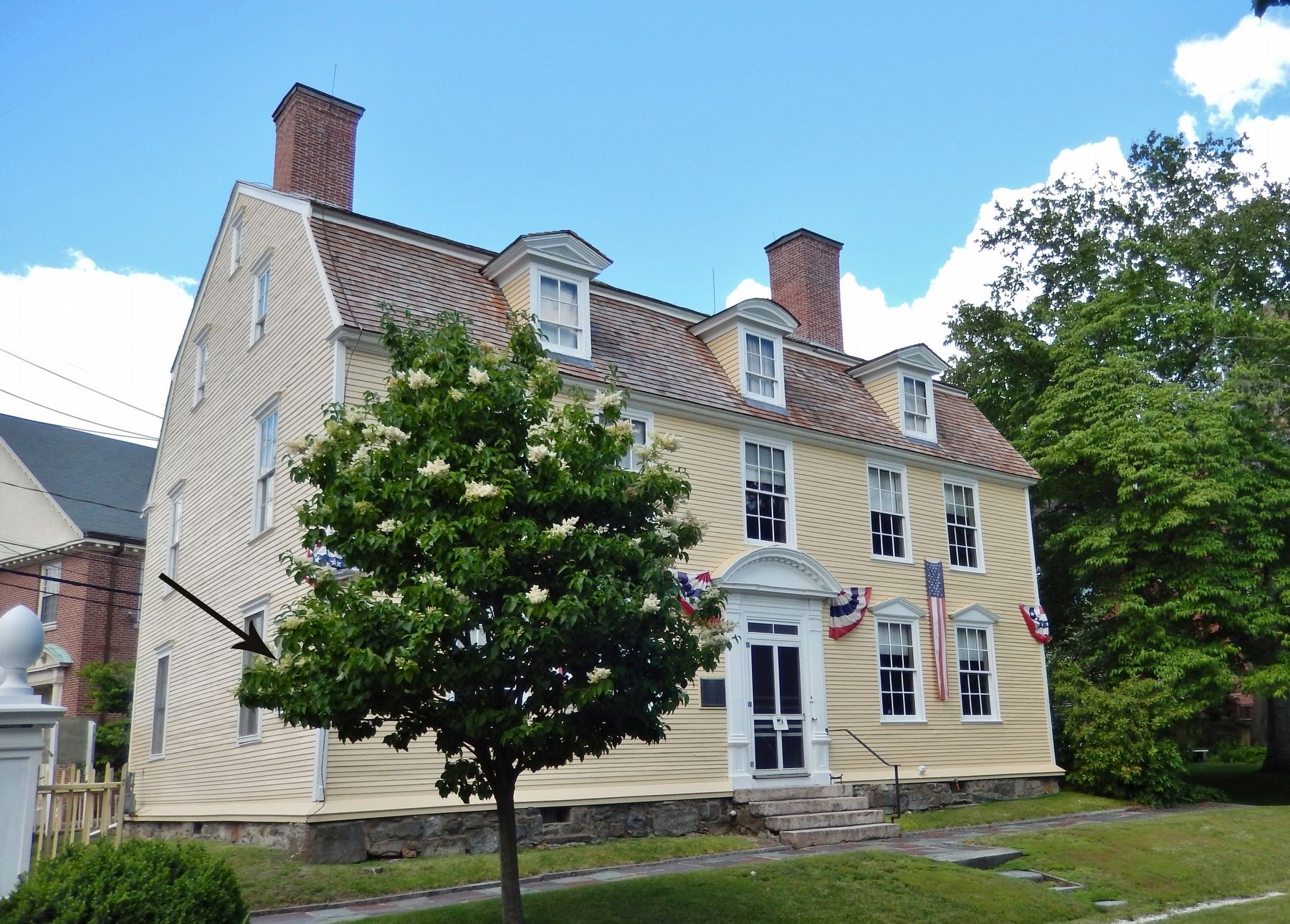