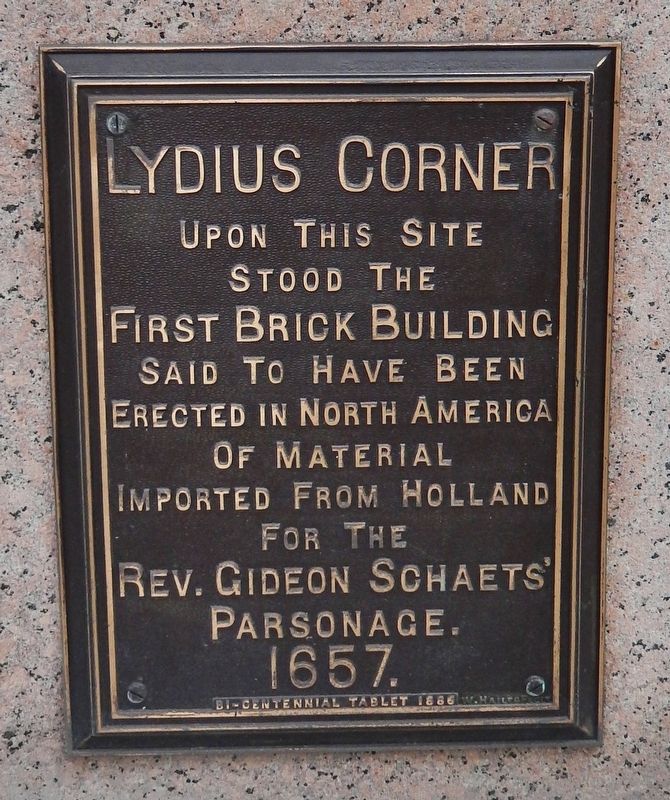 Photographed By Cosmos Mariner, July 12, 2017
1. Lydius Corner Marker
Inscription.
Lydius Corner. .
Upon this site stood the First Brick Building said to have been erected in North America of material imported from Holland for the Rev. Gideon Schaets’ Parsonage 1657 , Bi-centennial Tablet 1886 . . This historical marker was erected in 1886. It is in Albany in Albany County New York

Upon this site
stood the
First Brick Building
said to have been
erected in North America
of material
imported from Holland
for the
Rev. Gideon Schaets’
Parsonage
1657

Topics. This historical marker is listed in these topic lists: Churches & Religion • Colonial Era • Notable Places • Settlements & Settlers. A significant historical year for this entry is 1657. 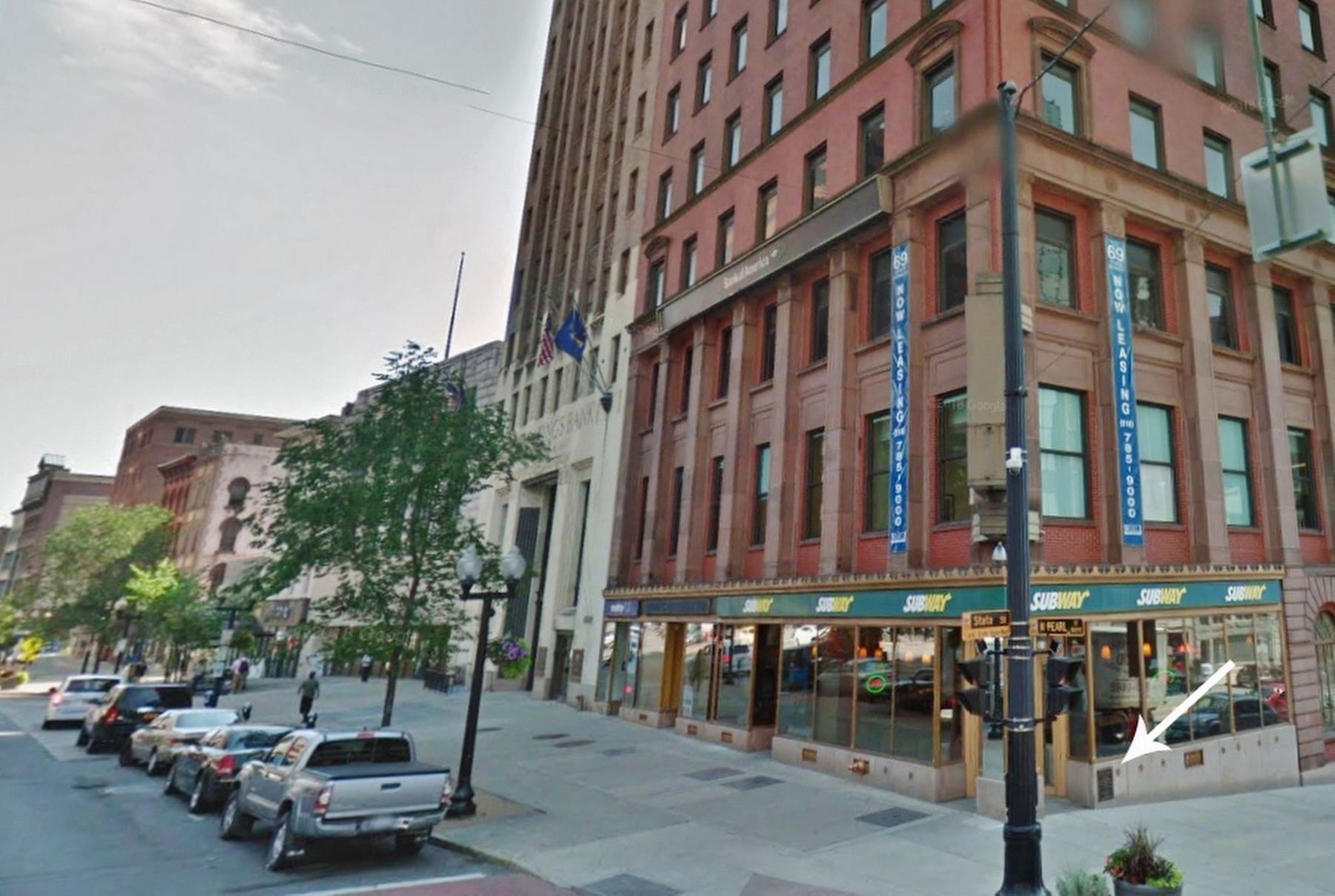 More about this marker. Tablet No. 18 of the Bi-Centennial Tablets of 1886 - and one of the few still in its original location.

Related markers. Click here for a list of markers that are related to this marker. Albany 1886 Bi-Centennial Tablets

Also see . . .
1. The First Church in Albany.
The Dutch Reformed Church was the centerpiece of Dutch culture in early Albany and its predecessor the village of Beverwyck. The church building itself was the most prominent feature on the community landscape. It was situated in the middle of the city’s main intersection from the 1650s to 1806. Enlarged about 1715, was the largest building in colonial Albany and was described by a number of visitors. The Dutch church clearly was colonial Albany's premier social institution! (Submitted on April 23, 2018, by Cosmos Mariner of Cape Canaveral, Florida.)

2. Domine Gideon Schaets.
According to traditional sources, Gideon Schaets was born in South Holland in 1607 or 1608. Gideon was educated chiefly by his father to become a schoolteacher and tutor. Sometime later, he began to study for the ministry. In May 1652, he was ordained in the Dutch Reformed Church. In that year, he accepted a call to replace Johannes Megapolensis in the church serving Rensselaerswyck and Beverwyck. He moved his family into a house in Beverwyck provided by Governor Stuyvesant and successfully served several terms as minister in Albany. The new church was built in Albany under his auspices. (Submitted on April 23, 2018, by Cosmos Mariner of Cape Canaveral, Florida.)

3. Domine Johannes Lydius.
Johannes Lydius was born in Maesden, South Holland, the eldest son of Reverend Hendricus Lydius. Following his father's profession, he entered the ministry. By 1692 he had become domine of the Reformed Church of Antwerp, Belgium. The Lydiuses sailed to America - arriving at New York in July 1700. By late September, they had taken up residence and he had been installed as the minister in Albany. The minister's status and his dependable service made his family welcome across Albany society. They were given what became a landmark house on the corner of State and Pearl Streets and he also owned a share of an Albany brewery. This Dutch minister was the founder of the Lydius family in America! (Submitted on April 23, 2018, by Cosmos Mariner of Cape Canaveral, Florida.)

4. John Henry Lydius.
John Henry Lydius was christened in Albany in July 1704. He was the only son of Domine Johannes and Isabella Rachels Lydius. He was deprived of paternal guidance when his father died before the boy was five. Raised by his mother and stepfather and mentored by his brother-in-law, Albany trader Jacob Staats, young John Henry went into the north woods to make his way in the Indian trade. By the late 1720s, he had settled in New France - establishing himself in the fur trade and marrying Genevieve Masse, a French and Indian woman. The son of a beloved and pious Dutch Reformed minister, he made his name in the Indian trade and in land speculation. His career was both aided and compromised by conflicting perceptions of him. Called an English agent by the French, a forked-tongued serpent by the Indians, a traitor by provincial authorities, and a swindler by embarrassed title holders from several colonies, he left that notoriety for posterity when he left New York in 1765. The subject of frequent romanticized and antiquarian profiles during the two centuries that followed, the legend of this frontier maverick lives on! (Submitted on April 23, 2018, by Cosmos Mariner of Cape Canaveral, Florida.)
Credits. This page was last revised on April 25, 2018. It was originally submitted on April 23, 2018, by Cosmos Mariner of Cape Canaveral, Florida. This page has been viewed 303 times since then and 54 times this year. Photos:   1, 2. submitted on April 23, 2018, by Cosmos Mariner of Cape Canaveral, Florida. • Bill Pfingsten was the editor who published this page.
Share this page.