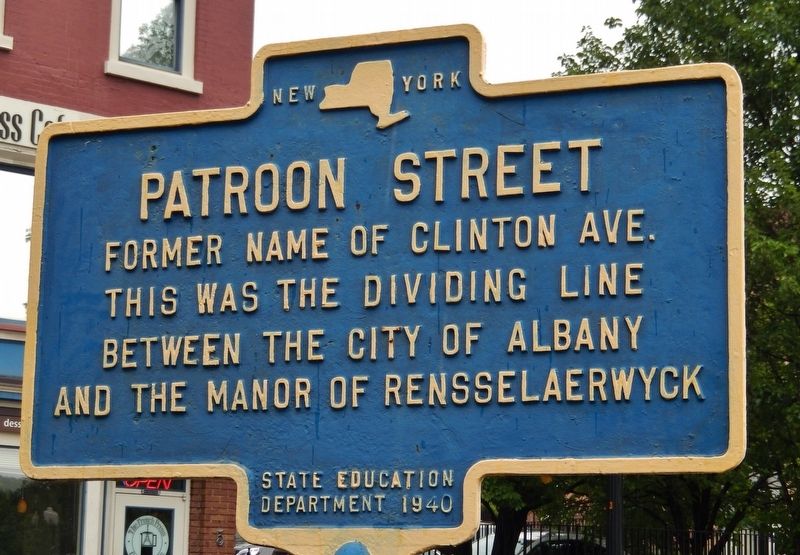 Photographed By Cosmos Mariner, July 12, 2017
1. Patroon Street Marker
Inscription.
Patroon Street. . Former name of Clinton Ave. This was the dividing line between the City of Albany and the Manor of Rensselaerwyck . This historical marker was erected in 1940 by New York State Education Department. It is in Albany in Albany County New York

Former name of Clinton Ave. This was the dividing line between the City of Albany and the Manor of Rensselaerwyck

Location. 42° 39.235′ N, 73° 45.015′ W. Marker is in Albany, New York, in Albany County. Marker is on North Pearl Street (New York State Route 32) 0.1 miles south of Clinton Avenue (U.S. 9), on the right when traveling south. Marker is located in Clinton Square, at the north end of the triangular plaza. Touch for map. Marker is at or near this postal address: 1 Clinton Square, Albany NY 12207, United States of America. Touch for directions. 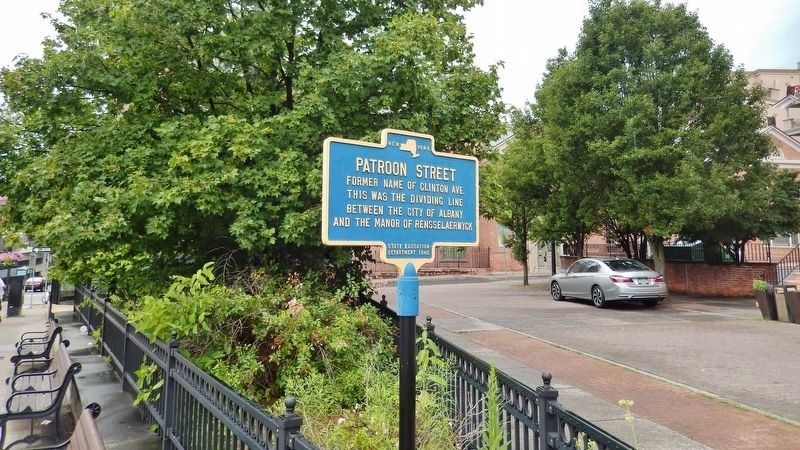 Also see . . .
1. North Albany, Albany, New York.
North Albany was settled in the mid-17th century by the Patroon of Rensselaerswyck and his tenants. The area of North Albany was originally woodland and farmland as part of the patroonship of Rensselaerswyck, a feudal land patent covering present-day Albany and Rensselaer counties. Due to the Erie Canal being constructed in 1825, North Albany saw immense growth, with the Albany Lumber District and an influx of Irish immigrants. (Submitted on April 23, 2018, by Cosmos Mariner of Cape Canaveral, Florida.)

2. Manor of Rensselaerswyck.
The estate was originally deeded by the Dutch West India Company in 1630 to Kiliaen van Rensselaer, a Dutch merchant and one of the company's original directors. Rensselaerswyck extended for miles on each side of the Hudson River near present-day Albany. It included most of what are now the present New York counties of Albany and Rensselaer, as well as parts of Columbia and Greene counties. The patroon had nearly total jurisdictional authority, establishing 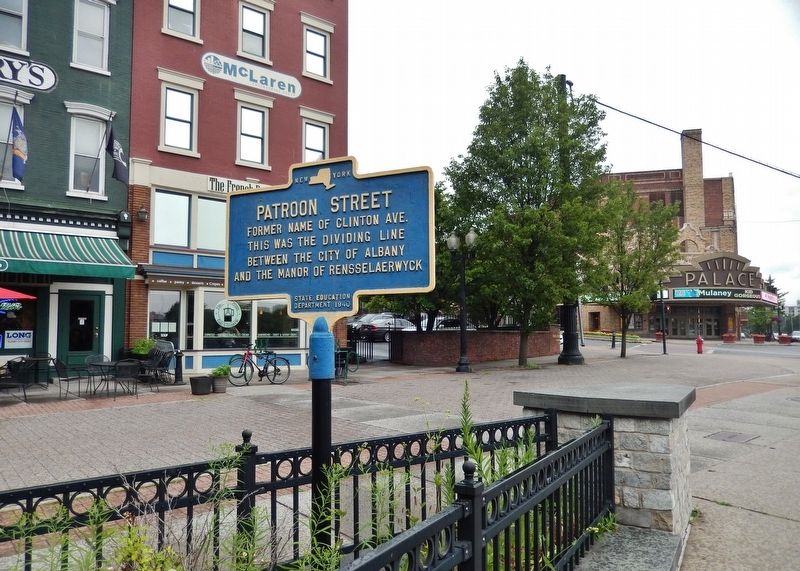 Photographed By Cosmos Mariner, July 12, 2017
3. Patroon Street Marker (wide view; looking north across Clinton Avenue)
civil and criminal law, villages, and a church. Tenant farmers were allowed to work on the land, but had to pay rent to the owners, and had no rights to property. The patroonship was maintained intact by Rensselaer descendants for more than two centuries. It was split up after the death of its last patroon, Stephen van Rensselaer III in 1839 (Submitted on April 23, 2018, by Cosmos Mariner of Cape Canaveral, Florida.)

3. Clinton Avenue Historic District (Albany, New York).
It originated with the city's creation of Clinton Square at its east end, shortly after the opening of the Erie Canal. Herman Melville lived for a year in one of the early rowhouses on the square. The rowhouse became the standard form as development continued to the west in later decades as the city industrialized. Today 92% of its nearly 600 buildings are 19th-century rowhouses in different architectural styles, predominantly Italianate, many built as speculative housing for the city's middle class. (Submitted on April 23, 2018, by Cosmos Mariner of Cape Canaveral, Florida.) 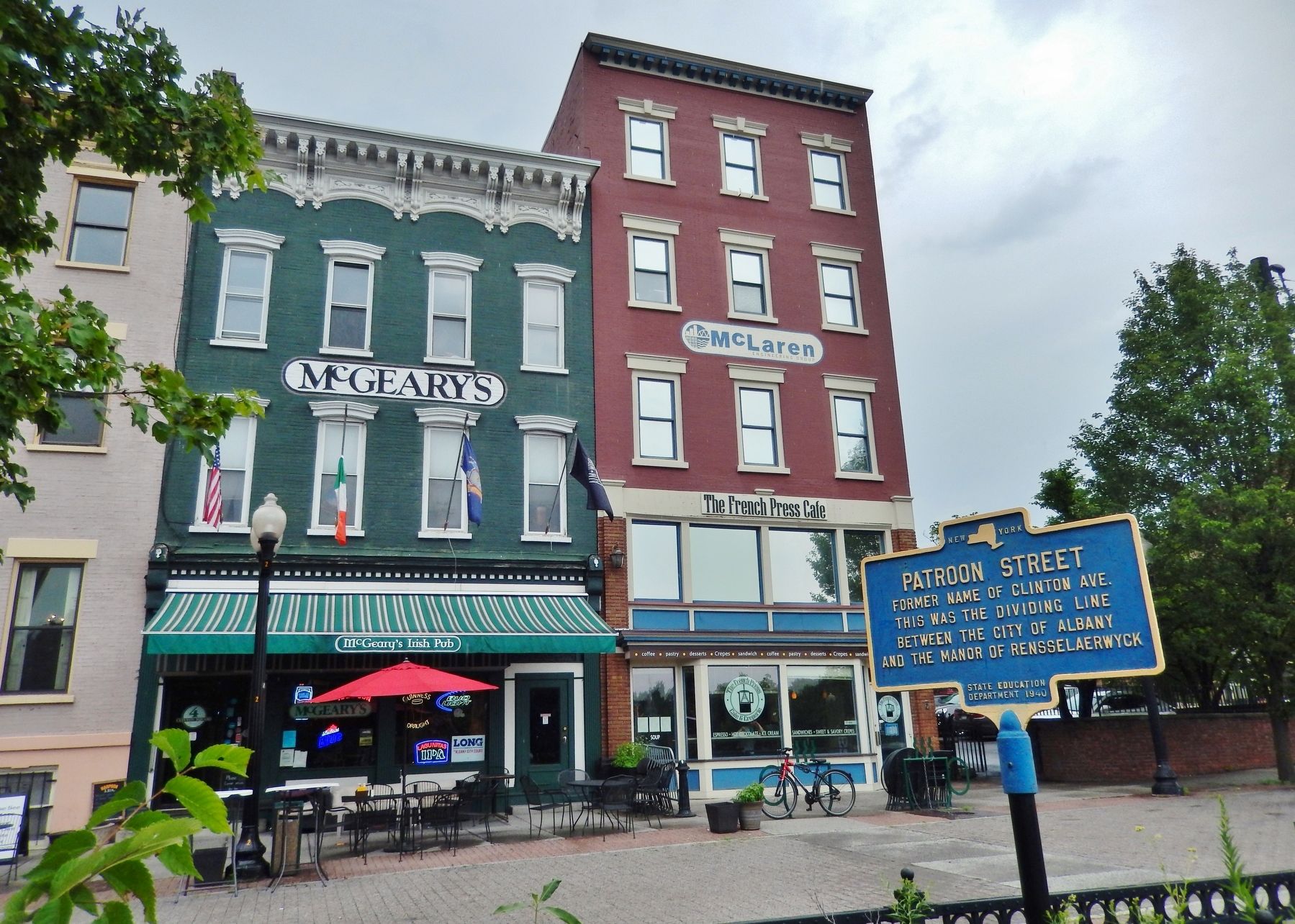