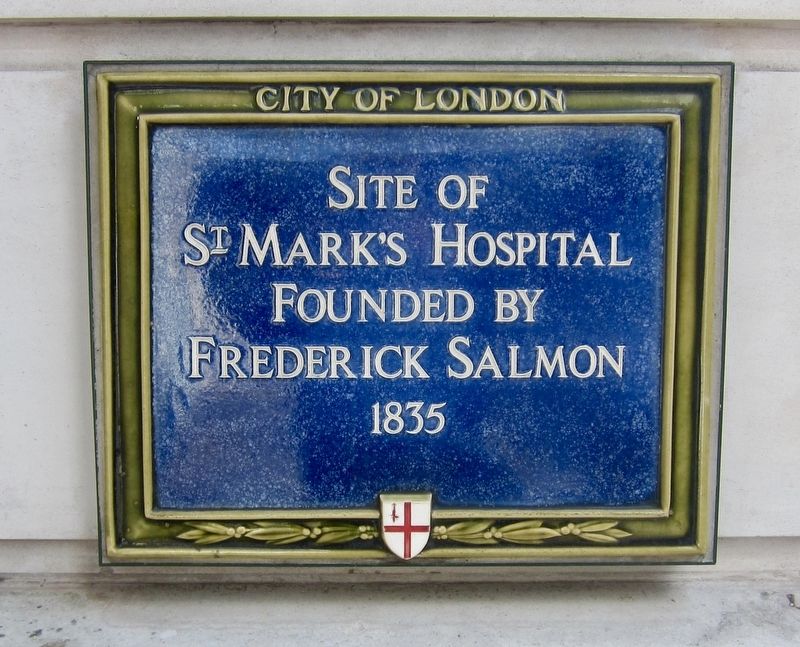 Topics and series. This historical marker is listed in this topic list: Science & Medicine. In addition, it is included in the UK, England, City of London Corporation series list. A significant historical year for this entry is 1835. 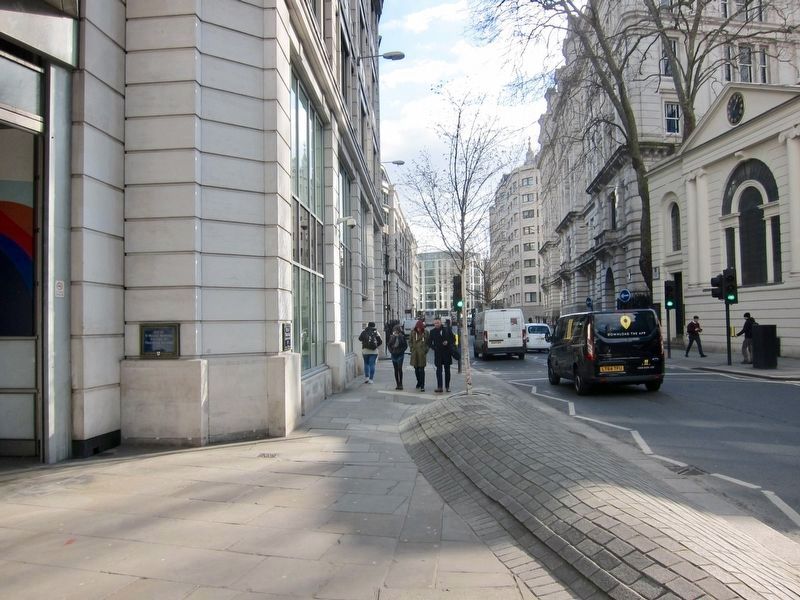 Photographed By Andrew Ruppenstein, March 20, 2018
2. St Mark's Hospital Marker - Wide View
The St Mark's Hospital marker is visible here on the left, with the Cooks Hall marker barely visible just a few feet to the right of that.

More about this marker. The marker is mounted just to the right of the entrance to the overhead pedestrian way that leads to the London Museum.

Also see . . .  St. Mark's Hospital (Wikipedia). "The beginnings of St Mark's Hospital were in a small room at No 11 Aldersgate Street where, in 1835, Frederick Salmon opened 'The Infirmary for the Relief of the Poor afflicted with Fistula and other Diseases of the Rectum'. There were just seven beds and in the first year 131 patients were admitted....Salmon decided to found his own institution to provide treatment for those conditions which were regarded as 'the most distressing that can afflict our common nature'. So the 'Fistula Infirmary', as it came to be known, was started. Much of the financial support came from the City of London. The Lord Mayor, William Taylor Copeland, was a grateful patient of Salmon's and became the first President. Another benefactor was Charles Dickens, who blamed his need for Salmon's surgical attentions on 'too much sitting at my desk'! There was an overwhelming need for such an institution giving specialist treatment free of charge to London's poor. Therefore, in 1838, when the number of patients had trebled, Salmon moved to larger premises at 38 Charterhouse Square, where there were fourteen beds and more space for treating out-patients...." (Submitted on May 5, 2018.)
Credits. This page was last revised on January 27, 2022. It was originally submitted on May 5, 2018, by Andrew Ruppenstein of Sacramento, California. This page has been viewed 98 times since then and 9 times this year. Photos:   1, 2. submitted on May 5, 2018, by Andrew Ruppenstein of Sacramento, California.
Share this page.