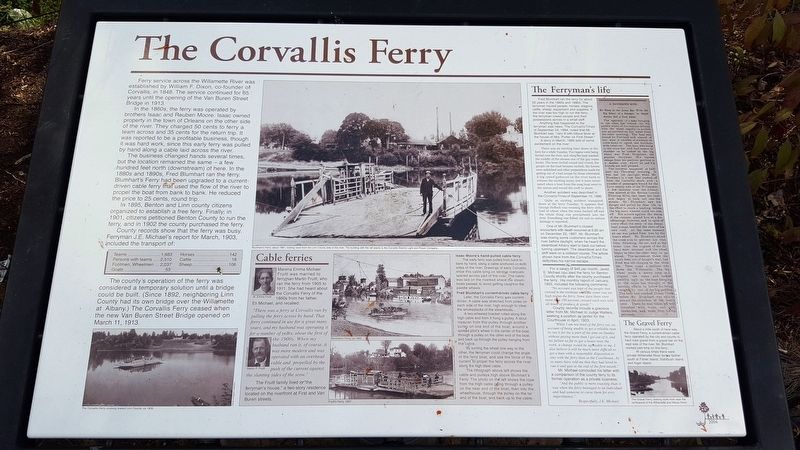 Ferry service across the Willamette River was established by William F. Dixon, co-founder of Corvallis, in 1848. The service continued for 65 years until the opening of the Van Buren Street Bridge in 1913.

In the 1860s, the ferry was operated by brothers Isaac and Reuben Moore. Isaac owned property in the town of Orleans on the other side of the river. They charged 50 cents to ferry a team across and 35 cents for the return trip. It was reported to be a profitable business, though it was hard work, since this early ferry was pulled by hand along a cable laid across the river.

The business changed hands several times, but the location remained the same – a few hundred feet north (downstream) of here. In the 1880s and 1890s, Fred Blumhart ran the ferry. Blumhart’s Ferry had been upgraded to a current-driven cable ferry that used the flow of the river to propel the boat from bank to bank. He reduced the price to 25 cents, round trip.

In 1895, Benton and Linn County citizens organized to establish a free ferry. Finally, in 1901, citizens petitioned Benton County to run the ferry, and in 1902 the county purchased 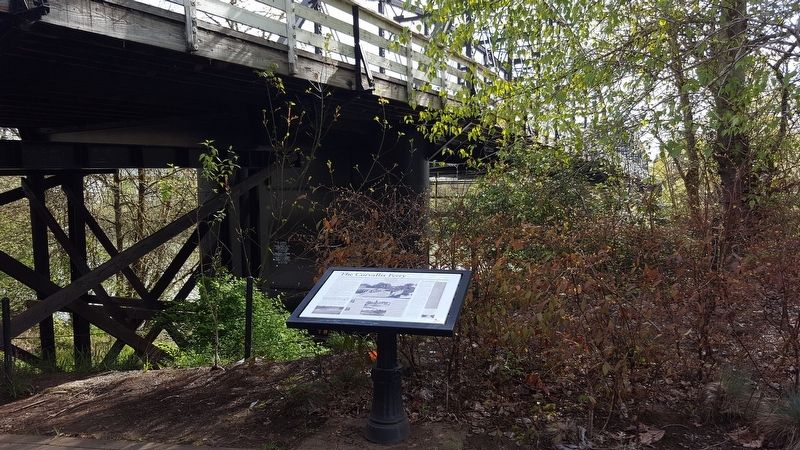 By Douglass Halvorsen, April 21, 2018
2. The Corvallis Ferry Marker
the ferry.

The county’s operation of the ferry was considered a temporary solution until a bridge could be built. (Since 1892, neighboring Linn County had its own bridge over the Willamette at Albany.) The Corvallis Ferry ceased when the new Van Buren Street Bridge opened on March 11, 1913.

(Inset)
Cable ferries
Marena Emma Michael Fruitt was married to ferryman Martin Fruitt, who ran the ferry for 1905 to 1911. She had heard about the Corvallis Ferry of the 1860s from her father, Eli Michael and recalled:

“There was a ferry at Corvallis run by pulling the ferry across by hand. That ferry continued in use for a great many years, and my husband was operating it for a number of years, about the first of the 1900s. When my husband ran it, of course, it was more modern and was operated with an overhead cable and propelled by the push of the current against the slanting sides of the scow.”

The Fruitt family lived in “the ferryman’s house,” a two-story residence located on the riverfront at First and Van Buren streets. 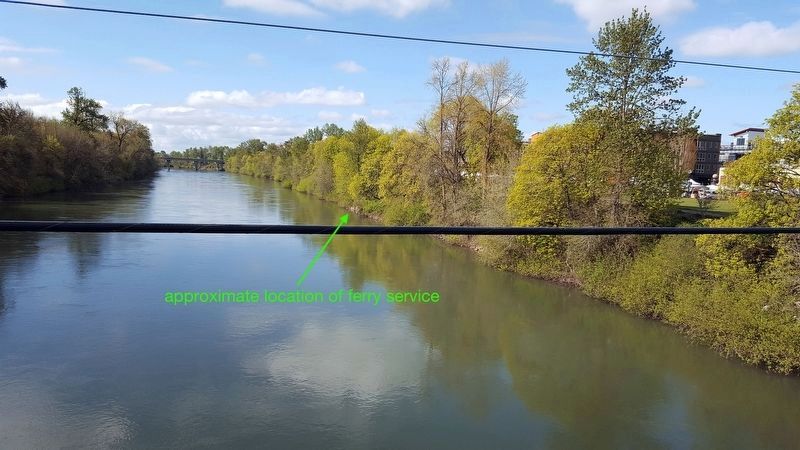 By Douglass Halvorsen, April 21, 2018
3. The Corvallis Ferry location
View looking south from Van Buren Street bridge
hand-pulled cable ferry
The early ferry was pulled from bank to bank by hand, along a cable anchored on both sides of the river. Drawings of early Corvallis show this cable lying on several rowboats spaced across part of the river. The cable was laid on the riverbed where the steamboats passed, to avoid getting caught in the paddle wheels.

Fred Blumhart’s current-driven cable ferry
Later, the Corvallis Ferry was current-driven. A cable was stretched from poles on each side of the river, high enough to clear the smokestacks of the steamboats.

By turning the wheel one way or the other, the ferryman could change the angle of the ferry boat, and use the force of the current to propel the ferry across the river along the high cable.

The Ferryman’s life
Fred Blumhart ran the ferry for about 20 years in the 1880s and 1890s. The ferryman hauled people, horses, wagons, cattle, sheep, equipment and supplies. If the river was too high to run the ferry, the ferryman rowed people and their possessions across in a small skiff.

Anything that happened to the ferryman was news. The CorvallisTimes of September 24, 1894, noted that Mr. Blumhart was “very ill with bilious fever at the house of Mrs. Porter on First Street.”

A story in March, 1895 told of some excitement on the river:

There was an exciting time down at the ferry for a while Tuesday. Two teams were being ferried over the river, and when the boat reached the middle of the stream one of the guy ropes broke. The boat circled round and round, the people on the boat became excited, the horses were unhitched and other preparations made forgetting out of a bad scrape by those interested. A big crowd gathered on the river bank to witness the exciting scene, but it soon terminated when a boat from the snag boat went to the rescue and towed the craft to shore

Another accident was described in the CorvallisTimes of September 10, 1896:

Quite an exciting accident transpired down at the ferry Tuesday. It appears that George Hofleck was crossing the ferry with a load of wheat when the team backed off and the whole thing was precipitated into the river. Everything was fished out and no serious damage is reported.

One of Mr. Blumhart’s closest encounters with death occurred at 6:30 am on December 22, 1897. Mr. Blumhart was rowing some customers across the river before daylight, when he heard the steamboat Albany start to back out before turning upstream. The steamboat and the skiff were on a collision course. The article shown here from the CorvallisTimes describes his narrow escape.

For a salary of $45 per month, Jared E. Michael operated the ferry for Benton County shortly after the county purchased the ferry. His monthly report of January, 1903, included the following comments:

No account was kept of the people that crossed in the rowboats when the water was too high to run the ferry. Some days there were more than 100 persons crossed each way with all kinds of produce & goods.

County records include a gracious letter from Mr. Michael to Judge Watters, seeking a position as janitor for the Courthouse in April 1903:

“While I am not tired of the ferry yet, on account of being unable to get a reliable man to run it for me a part of the time on Sunday without paying more than I get out of it, and my failure so far to get a house near the work, a change would be agreeable to me. I also believe it will be much more difficult to get a man with a reasonable disposition to stay with the ferry than at the Courthouse. As so many have told me that they had hired to run it and quit at the end of the first month.”

Mr. Michael concluded his letter with a comparison of the county ferry to its former operation as a private business:

And the public is more exacting than it was when the ferry belonged to an individual and had someone to curse them for every impertinence.
Respectfully, J.E. Michael

The Gravel Ferry
About a mile south of here was the Gravel Ferry, a current-driven cable ferry operated by the city and county to haul road gravel from a gravel bar on the east side of the river. Mr. Blumhart worked part-time on this ferry.

Location. 44° 33.935′ N, 123° 15.445′ W. Marker is in Corvallis, Oregon, in Benton County. Marker is located along a bike path on the west bank of the Willamette River and just south of the Van Buren Street bridge. Touch for map. Marker is in this post office area: Corvallis OR 97333, United States of America. Touch for directions.