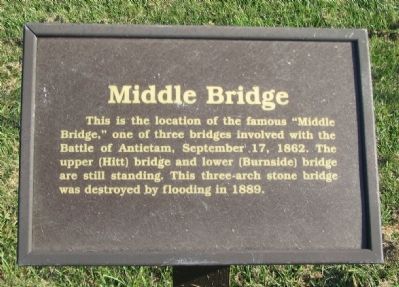 Photographed By Craig Swain, September 17, 2007
1. Middle Bridge Marker
Inscription.
Middle Bridge. . This is the location of the famous "Middle Bridge," one of three bridges involved with the Battle of Antietam, September 17, 1862. The upper (Hitt) bridge and lower (Burnside) bridge are still standing. This three-arch stone bridge was destroyed by flooding in 1889. . This historical marker was erected by Washington County Historical Advisory Committee. It is Near Sharpsburg in Washington County Maryland

This is the location of the famous "Middle Bridge," one of three bridges involved with the Battle of Antietam, September 17, 1862. The upper (Hitt) bridge and lower (Burnside) bridge are still standing. This three-arch stone bridge was destroyed by flooding in 1889.

Topics and series. This historical marker is listed in these topic lists: Bridges & Viaducts • War, US Civil. In addition, it is included in the Maryland, Washington County Historical Advisory Committee series list. A significant historical date for this entry is September 17, 1808.

Location. Marker has been reported missing. It was located near 39° 27.872′ N, 77° 43.583′ W. Marker was near Sharpsburg, Maryland, in Washington County. Marker was on Boonsboro Pike (State Highway 34), on the right when traveling east. Located on the west end of the modern Boonsboro Pike bridge. Touch for map. Marker was in this post office area: Sharpsburg MD 21782, United States of America. Touch for directions. 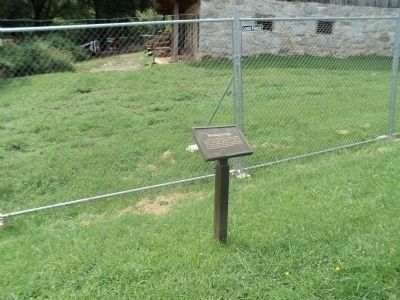 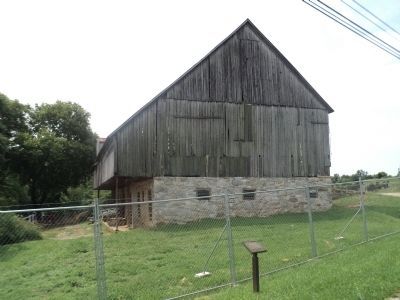 Photographed By Bill Coughlin, August 13, 2013
3. Marker on the Antietam Battlefield
The Newcomer Barn can be seen behind the marker. 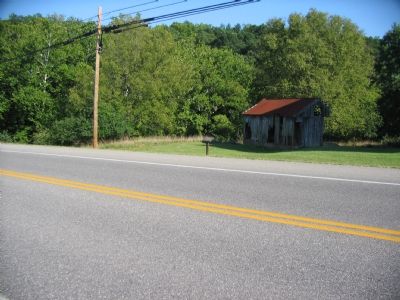 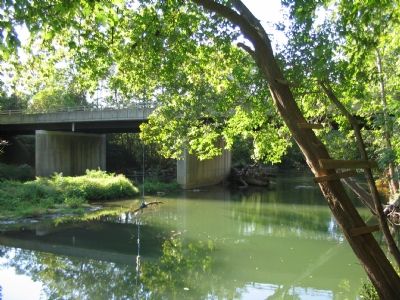 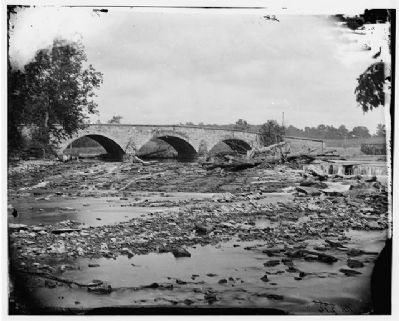 Library of Congress
6. Antietam Bridge on the Sharpsburg-Boonsboro Turnpike - The Middle Bridge
Photograph of the bridge as it appeared during the battle of Antietam, credited to Alexander Gardner. Most likely this image was taken shortly after the battle when Gardner was also collecting some of his most famous photographs. The angle of this photo is difficult to reconcile with other wartime photos and the lay of the land. However, the Library of Congress denotes this bridge as the Middle Bridge where the Boonesboro Pike crossed the creek.
[Civil War photographs, 1861-1865 / compiled by Hirst D. Milhollen and Donald H. Mugridge, Washington, D.C. : Library of Congress, 1977. No. 0128] 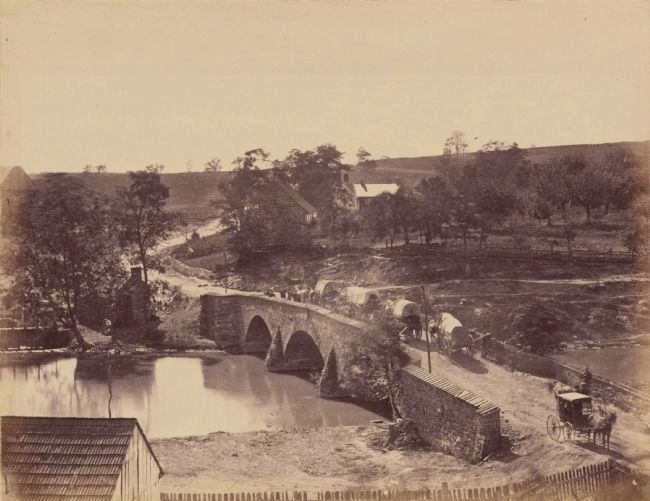 7. Middle Bridge
Another view of the Middle Bridge, this one looking over the bridge to the west (toward the battlefield). Notice the bridge's abutments, with the side closest to the camera having an extension. The Newcomer Barn is just in frame to the left.

[From the Gardner Collection of the National Park Service, sourced through Wikipedia] 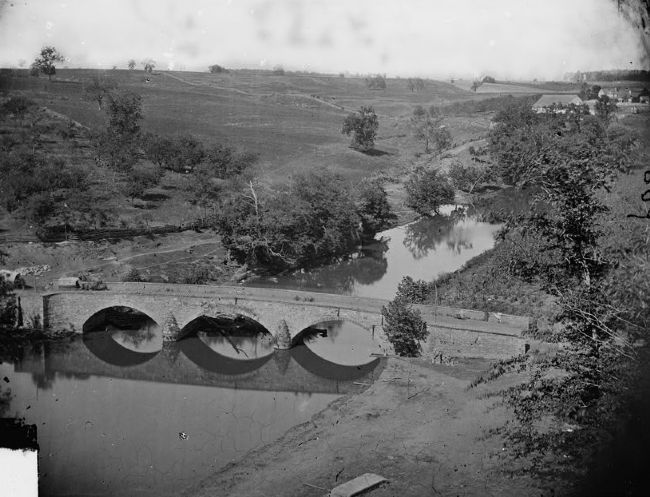 8. The "Antietam Bridge"
This wartime photo of the bridge titled "Antietam Bridge," also appears to show the Middle Bridge, this time looking from the high ridge just east of the crossing point. If the placement of the photographer is correct, this view looks to the northwest toward the area of the modern day Observation Tower on the Sunken Lane. The abutments are similar to those in the photo above, but the photographer carefully kept other placemarks out of frame!